In 1992 Mr Berger was part of the music for the “first version” of Gösta Berlings Saga staged at the Västanå Teater. The play was based on the debut novel of 19th century Swedish author Selma Lagerlöf, published in 1891, which was also made into a 1924 silent film directed by Mauritz Stiller starring Greta Garbo, Lars Hanson and Gerda Lundequist. A 1925 opera I cavalieri di Ekebù by Riccardo Zandonai was also based on it. His involvement in music of theatre continued with Sagan Om Ringen, the Swedish version of JRR Tolkien’s Lord of the Rings and the production was released in 1995 as a 13-CD Box set. The latter was recorded by a large group that also included the prodigious saxophonist Jonas Knutsson, who became part of the enduring family of musicians orbiting in the same constellation as Mr Berger. 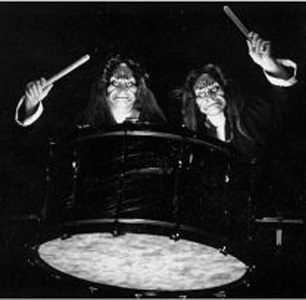 Another musician was the electrifying contrabassist Christian Spering. Another enduring musical bond was formed and the four Swedish giants made scores of records together including a slew under Mr. Berger’s burgeoning Country & Eastern imprint.

More theatre also followed with Van Huygen’s Principle including a 1996 performance with masks and visible music – a play without words – inspired by the 17th century Dutch scientist Christiaan Huygens. The play involved a plot performed by actors wearing costumes on a set designed by the celebrated Bengt Carling with lighting by Torkel Blomqvist and masks by My Walther. The play was performed at Theatre Tribunalen in Stockholm and music was provided by Ivo Nilsson, Bengt Berger, Bosse Skoglund and Roland Keijser. King Lear followed and for the Shakespearean tragedy, Mr Berger teamed up with the legendary violinist Ellika Frisell. The play starred the great Swedish actor Keve Hjelm in one of his last roles on stage.

“There is always a third possibility, as long as you have the ability
to find it.”
Selma Lagerlöf

The decade closed with the purchase of nine seminal Indian classical recordings from the catalogue of the legendary Swedish Amigo label, including incredible live performances by the sarod master Amjad Ali Khan and the great Dhrupad master Zia Mohiuddin Dagar. Equally, the new millennium began with a big band in the form of a gathering of fifty of the most prominent Swedish percussionists. They met for dinner and this was followed by an impromptu performance in which the legendary drummers – Swedish, from elsewhere in Europe, Asia, African and South America drummers who had never played together before entered into a titanic percussion jam. So explosive and successful was the evening that Strike as it was called had encore performances for the next three years before this supergroup was finally retired.

Almost five decades after Mr Berger’s epic musical journey took him to Africa, and on a seemingly endless one through the Indian subcontinent the concept of Country & Eastern began to take shape. It began with a Monday Night gig at Stockholm’s Mundo Jazz club and continued for 23 subsequent Mondays. Mr Berger’s trio – then called simply Berger Knutsson Spering – began to engage in long axiomatic musical exchanges involving composition and improvisation. The episodes came to be called Country & Eastern Nights because the music moved seamlessly between Swedish folk, Jazz, Indian and African idioms and styles with each man bending and twisting his instruments as he put his virtuosity and genius to the test. This union gave rise to the Country& Eastern label with contributions from each of the three musicians separately and together and by 2005 it grew into a celebrated label with a small but powerful catalogue that included Jazz, Swedish folk music and a breathtaking collection of rare and priceless Indian and African music.