The imaginary landscape of Bitter Funeral Beer is a monumental orchestral suite, a procession-cum-funeral story inspired by the Ghanaian experience. The listener is led slowly through ever-changing musical scenery, viewing the same landmarks from constantly evolving and life-changing perspectives. This chrono-geo-spiritual approach to time is fundamental to the suite and the work’s hauntingly sombre lyricism – often powerfully muted by the thud of drums – rises at its centre to a vast and shattering climax. The musical signposts created by the radiant Lo-Birifor funeral xylophones played by Mr Berger and Anita Livstrand, whose elemental keening lights up later sections of the suite reminds us constantly of Mr Berger’s lyrical gifts, all the more moving for rarely being acknowledged. Every performance – from the first (ECM) one to subsequent performances across Europe delivers tremendous power with vocal parts assigned to solo instruments in an eloquent, elegiac ritual engagement. 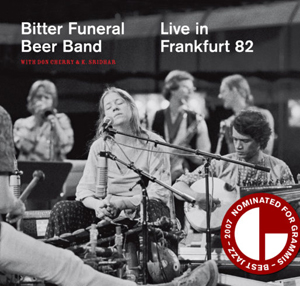 Bitter Funeral Beer ruled the world of music between 1981 and 1986 and set the tone for – and influenced – almost all the music that Mr Berger has made for the next four decades. His trips to India and frequent performances there and in return engagements with Indian musicians filled his time, and fueled his music. But he also moved effortlessly between his African and Indian incarnations as effortlessly as he inhabited his Swedish and Jazz roots. The bonds with Spjärnsvallet were strong and he began to also explore new horizons such as the one with Anita Livstrand and Christer Bothén in Kautokeino, and a deep dive into Scandinavian music. Later in 1988 he was one of two drummers on another iconic recording, Thums Up (Caprice, 1988) named after the ever popular Coca-Cola soda-clone from India. The group also included Thomas Gustafson, Roland Keijser and his old colleague from Rena Rama, Lennart Åberg among others.

“Yes, I felt I was on a mission spreading the polyrhythmic ideas from the West African music…Also the function of the music was important to me, we did play funeral music but it was full of joy.”
Bengt Berger in a recent interview with Todo Mundo

In 1986, an album, Praise Drumming, was first released after the Bitter Funeral Beer Band enjoyed hugely successful tours of Europe and India for the 1984 edition of Jazz Yatra. Today the term world music that Don Cherry had coined years before may have become something of a cliché but there are still a few musicians who held its meaning close to the heart as they continued to roam the earth’s vast musical topography. Mr Berger was one of those early visionaries among that small tribe of maverick musicians, a peripatetic percussion colourist and composer whose art seems to launch itself from some distant musical shore before washing up on a new Swedish beachhead, pounded into the cultural microcosm of folklore that emerged from among mists of the 1st century proto-Indo-European Suebi peoples.

Praise Drumming reversed the musical orientation of Mr Berger as he looked at the circle of life from the Ghanaian lens with music refracted through his Swedish one. Eight works feature beautifully crafted arrangements of beguiling variety and sensuousness in every lovingly caressed melodic, harmonic and percussive phrase. Funerary musical devices and motifs played on a breathtaking array of percussion instruments by every member of the ensemble, most of who also double on brass, reeds and woodwind, stringed instruments. Bittersweet music conjures the staging of “the funeral” complete with brilliant vocalastics from Anita Livstrand as the rest of the musicians launch the imaginary body in its bier to Valhalla but not before the music becomes part of a natural landscape that mixes beauty and danger with the sounds of the spirit-world of ghostly familiars, all exquisitely sculpted from the sound of saxophone and flute.