The trip to Ghana also produced a seminal field recording, probably one of the most important of African field recordings in the modern era. It was made in Dormaa. “…we encountered the magnificent chief of Ammasu (nana Barima Kwame Amponsah Appiah Ammasuhene (chief of Ammasu) and Ankobeahene (chief of the ruling matrilineage Ankobea) and the regionally renowned Akapoma band. They invited us and our two small children to stay and study in their village. Our children spoke the language Twi fluently after one and a half years but then forgot it as quickly,” he wrote in liner notes to the albumThe Music of Ammasu (Country & Eastern, 1976). 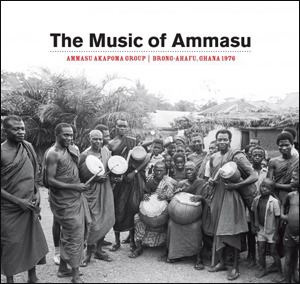 “In Ammasu I learned from Kwame Yeboah and became a member of the Ammasu Akapoma Group, the hottest music provider at funerals around Dormaa-Ahenkro in the Brong-Ahafu region of Ghana.” (Bengt Berger from liner notes).

The recordings document the highly ceremonial music of the Ammasu. The staggering array of drums of the people’s aristocratic orchestra tussles mightily with the Ghanaian grit addressing the mortal and the spirit worlds in a monumental set of the grandest and most spectacular polyrhythmic musical structures weaving in and out of the voices of the sages old matriarchs and younger singers. The approach is nimble and stylish and the performances communicate a strong sense of dramatic spontaneity. Throughout there is a sense that the musicians are navigating a pulse labyrinth that mirrors both the mortal and spirit worlds. In the sorrow of the funerals there is also a strong sense of joy as the both worlds collide elevating the human spirit and one is instantly reminded of the similar feelings evoked by Jazz funerals in New Orleans – especially in when the brass band begins to play towards the end of the recording.

“she stood with her feet firmly planted on the ground showed her key role as farmer and producer of food and wealth, as well as her closeness to Asase Yaa, the goddess, spirit and keeper of the earth and all it yields.”
From Ammasu:
An Anthropological
Narrative by
Prudence Woodford Berger

There is no doubt that the Ghanaian experience left a lasting impression on Mr Berger and his music. His studies continued and included studies to master Lo-Birifor xylophone music with Kakraba Lobi in Accra and the north of Ghana. It was the Ammasu and the Lo-Birifor experiences that poured out into what became Mr Berger’s seminal large ensemble. The band was graced by Mr Berger’s teacher from Ghana, Kakraba Lobi and in 1978 he and the “Ett Minne För Livet” (A Memory For Life) made an extensive tour of Sweden. This ensemble was later incarnated as The Bitter Funeral Beer Band and the music that later came to be called Bitter Funeral Beer – a five part suite that was based on the life and death, and spiritual resurrection of life in Ghana. It is a magical story told in Mr Berger’s Ghanaian experience as it collided with his natural Swedish-European sensibility.

“After my Ghana years Christer Bothén and I joined Archimedes Badkar, a world music group started in 1975. In this group I first tried to incorporate the Ghanaian Ko-Gyil xylophone, there is a recording of it on the 1978 Bado Kidogo album,” Mr Berger tells us. But the best was soon to come after the formation of the Bitter Funeral Band. Their sensational tour of Europe included a record of the same name which was produced for ECM Records. The music was, as Mr Berger puts it, “a mission for the 12/8 gangokui bell pattern from the Ewe people that I thought might save the world.” He had applied some of this in various musical group, among them Archimedes Badkar and even recorded an early and quite good version of “Darkpen”, an arrangement of the Lo-Birifor funeral xylophone music that I had studied with Kakraba Lobi. But the version with Bitter Funeral Beer Band is what altered the world music landscape substantially. That, bigger group grew out into one of the most celebrated large ensembles of the 1980’s, and it was specifically created for the music Mr Berger wrote around the drumming (mostly Ewe) and funeral music from the north of Ghana.