The performance recasts the Indian raag, “Chandrakauns” (literally “the five notes {of} the moon) and it unfolds in an hour-long concert in which the plangent sound of the rudra veena played by Zia Mohiuddin Dagar picks out the winding melody that reverberates in the two-note drone of Mr Berger’s tanpura for the first half hour, or so, as melodic themes are stated and re-stated. The round sound and broad tempi unfurl in the reverberant acoustic making for a highly devotional, meditative atmosphere and the rhythm and dynamics change with the passage of the elaborate “Alap”, into the “Jor and Jhala” sections of the raag until its dénouement in the “Gat” sequence, which is played in “Chowtal” as the raag undergoes various modulations of rhythm and tempo, as Pandit Taranath and the pakhawaj enters the music, alternating between subdued passages and exciting climaxes.

“but in music alone we see God
free from all forms and thoughts. In every other art
there is idolatry”
Hazrat Inayat Khan

Mr Berger brought all of the seminal knowledge of Indian music and culture back to Stockholm moving back and forth between Sweden and India as he gained in stature as a musician in both countries. During this time he also developed a timeless friendship and musical bond with K.Sridhar, who was a pupil of Zia Mohiuddin Dagar in the Dagar Gharana of Rajasthan. Meanwhile back in Stockholm, Mr Berger formed the seminal ensemble Rena Rama with the incomparable reeds and woodwinds player, Lennart Åberg, pianist Bobo Stenson and bassist Palle Danielsson. 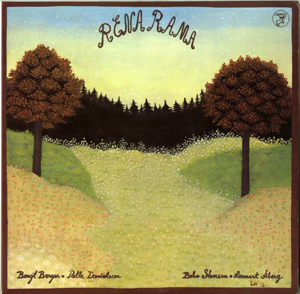 The influence of Indian modes and rhythms – combined, of course, with African, Balkan and Turkish modes and rhythms – characterised the music of Rena Rama. But it was the influence of predominantly Indian music that gave the avant-garde band its unique character. This cultural collision is magnificently displayed right out of the gate in a winding percussion discussion with which the eponymous album (Caprice Records, 1973) is announced. That “Introduction” which melts into the Azeri-influenced “Maqam” features Mr Berger on a battery of percussion instruments and on “Pow Wow” he first showcases his skills on a striking tabla performance that forms a diaphanous rhythmic backdrop redolent of Mr Danielsson’s echoing bass for Stenson’s cascading piano lines that bob and weave into Mr Åberg’s soaring, ululating flute. The album reaches its breathtaking climax with “Bhatiali” based on a traditional Indian melody, which became the band’s anthem when they performed it to rapturous applause across Sweden and across Europe too.

Although Mr Berger eventually moved on from Rena Rama continued its sojourn with Leroy Lowe behind the drums, even making other albums together, including Inside-Outside (Caprice, 1979). By this time Don Cherry had already been in Sweden for a decade with his painter wife, Moki, and two young children. The trumpeter had already been a strong influence on the Swedish Jazz music scene. He had already uttered the famous phrase “I’m playing world music…” in answer to an interviewer’s question and had been jamming with Rena Rama, Mr Berger (who also played with Mr Cherry when the drummer was still part of Arbete & Fritid) and had a hand in the formation of Sevda, a group that included the Turkish drummer and percussionist, Okay Temiz and his brother Akay, together with trumpeter Maffy Falay.