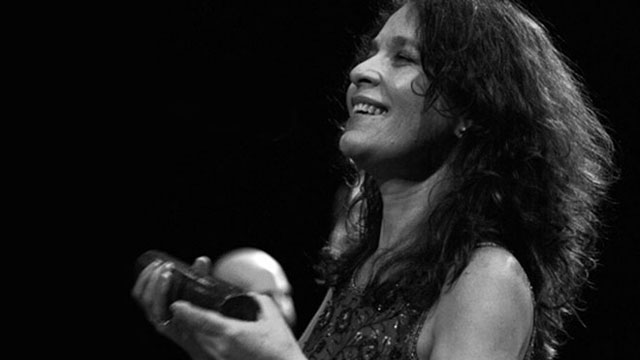 Lucia’s voice cuts through the dense clouds and shoots across the sky towards the infinite… Beloved Carmelita has thrown her life away. Dressed like a siren, she emerges from her home to walk the streets. The singer is heartbroken. “Carmelita, adiós,” she warns… “Ai…leh leh leh…/No sabiendo que la rosa/no sabiendo que la rosa/muere triste y deshojada/a le le le,” “Not knowing that the rose/Not knowing that the rose/Dies sad and bereft of petals/Carmelita adios.”

Lucía Pulido’s voice is in flood, like the Orinoco when it rains and is angry that the earth is dry. Her voice rises and falls, ululating… mimicking the river as it soars high and mighty over everything, sweeping out of sight the flotsam and jetsam that despoil the green brown and blue of the soundscape. It is the cleansing fire, the heart’s desire. The gausá rattles and trembles in her hand as her voice is tremulous. The chirimía band that encourages her sensuous swagger to become intense as a dervish, or mystic… a saint in a trance until her energy and the band’s consume everything on the earth that bleeds with elemental sorrow—and many time with unbridled joy as well. 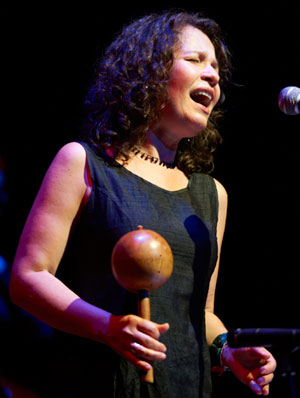 The album is Lucía Pulido, a 2000 release from the German label, Intuition. It is a pivotal one for Pulido, who is joined here by the Japanese percussionist, Satoshi Takeishi who arranges the songs and also plays the Tambora, Llamador and Redoblante—instruments of north and west African origin that are traditional to Colombia and elsewhere in South America, first brought over by the Spanish conquistadores. Like she has done on so many occasions before, Pulido reaches deep into the heart of her music. In fact she goes even beyond that to find the soul of the songs, the ghostly characters and develops the kind of bestiary that would have done that Argentinean master—Jorge Luis Borges—proud. Her lyricism is beautiful and her profound interpretations qualify her to be more than a griot. On the sensual “El Pilón,” a traditional feature that is like something from out of missing verses from the Biblical Songs of Solomon she cavorts with her characters, slurring and delaying the end notes of each phrase to depict near-drunken love and this infuses the song with dramatic puya effect.

Two religious songs make this album breathtakingly beautiful. The first is the somber, “En Una Tiniebla Oscura” devoted to the Virgin Mary and the other is played to “Cantos de Vaquería,” lavishly enhanced with brass and woodwinds. Her association with Bullerengue is masterful and the two on the album are unforgettable. “Porro Magangueleño” and “Carmelita, Adios” are so deeply felt that they are almost seared into the memory. “Zafra” is a high and lonesome zafra or herding song from the Atlantic coast of the country and is magnificently approached by bassist, Jairo Moreno, who might as well have bowed his way into a very special place in the realm of acoustic bass players. The percussionists make the piece much too seductive to resist. And “Velo Qué Bonito” is a funerary masterpiece, conceived and executed with sublime emotion. 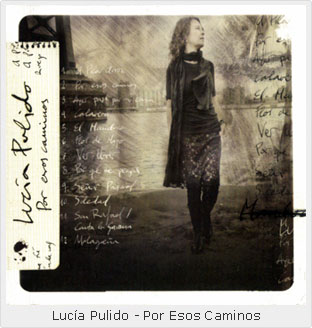 Lucía Pulido is an artist who connects with the genre of song at a very elementally deep level. To that extent she exercises an almost shamanic control over the lyric, its narration and how it will affect the listener. In Africa she would be a gnawa, like Maalem Mahmoud Gania, the legendary Moroccan gnawa musician first brought out of Africa by Bill Laswell with the seminal Trance of the Seven Colors, a collaboration with the great tenor saxophonist, Pharoah Sanders that is a certified masterpiece, as is the other gnawa album produced by Laswell, The Next Dream with that other mystical gnawa artist, Bachir Attar.