Pulido is an artist who has been shaped by a passionate love for her country and is bonded to Colombia almost the way a wood sprite is bonded with a forest floor. The air she breathes seems to transform itself as it courses through her veins. Cultures collide in her heart and soul… African, Spanish, Caribbean, Amerindian. She may not be any one of them, but she is all of them. This is why her soul can float free, travelling infinitely across the country drawing on sounds and stories—real and mythical, concrete and mystical—until she has absorbed them and made them her own. It seems that she can experience life through every pore. As experiences become internalized they also form a continuum that Pulido transforms into her art using a voice that has no parallel in music. Pulido’s voice is like an instrument that is at once a part of her body as well as a musical device that is to be controlled with unbridled imagination and extreme virtuosity. 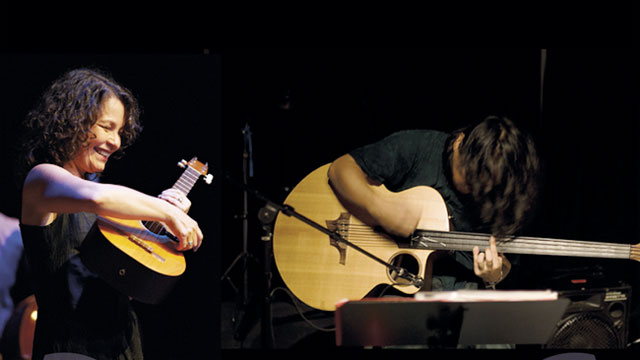 So complete is Pulido’s command of her sublime voice that she can set it free like a bird, watching as it catches a thermal and floats high and mightily across oceans of sound. She can bend it, let it crack and yodel with it. And because her voice is a mirror to her soul she can let it sink to depths of despair to conjure up images of extreme sadness—even the finality of death—before it rises and flies free as it is the soul itself ascending into the heavens where it will be ensconced, with celestial beings, as it finally comes to rest. That is just one of the stories she can tell. Her intonation is exquisite. Her songs become arias as she articulates not just emotions, but the complicated melodic and harmonic journeys that she undertakes to tell the music’s stories. She is a trumpet, a shepherd’s horn; a trombone and a lyre. She is a wood sylph, a siren, a saint and sinner crying out for salvation. She is a drum connecting with the animism of the rainforest as well as with the frightening prospect of life in a slum.

Clearly Pulido exists in a continuum that parallels the history of Colombia. Its fractured history from the time it was liberated from its Spanish colonists by Simón Bolívar through dictatorships of the early part of the 20th Century, the guerillas who tore up the country; the drug cartels—the chilling legacy of the 70’s. It was against this backdrop that Pulido first made a name for herself as the voice of the legendary duo, Iván y Lucía. The “Iván” of the dup was Iván Benavides, a songwriter and musician whose name was synonymous with the Nueva Canción movement, which incorporated the newly invented vallenato musical dialect, much in the same way Caetano Veloso’s and Gilberto Gil came to found Musica Popular Brasileira, or the tropicalia movement in song. Throughout the 80’s and the 90’s, the duo, Iván y Lucía ruled the Colombian popular music scene as Veloso and Gil, Elis and Maria Bethânia ruled the one in Brasil. 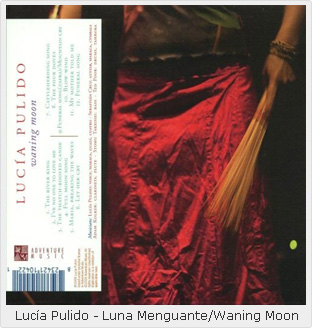 The power duo performed tirelessly crisscrossing the country, performing in small towns and large ones. Benavides grew into a truly accomplished composer, who probably did not get the credit he deserved for the music he helped create for a decade. It is unfortunate that the duo is known to have recorded only two albums and it is not really known how much of the music really remains for aficionados and collectors to treasure. It is however, impossible to erase from memory the recording and many performances of Benavides’ classic chart, “Alba,” a song which he wrote to a poem by José Luis Díaz Granados. Iván y Lucía created a song that became an anthem for a whole generation, as did other classic Nueva Canción compositions, “A la sombra del tiempo” and “Corazón” among the numerous others that Benavides created for his partner and himself to woo audiences with wherever they went to perform. Benavides also created songs of protest against the murderous politics of the paramilitary culture that was tearing Colombia apart then. A few have still survived. “Canción para los ausentes” and the towering “Afuera” were two such songs. The latter is as well-known as the Brasilian legend, Chico Buarque’s “Calice.”

Then, in the early 90’s Carlos Vives, arguably Colombia’s most well-known artist launched a new record label to celebrate the growing popularity of Colombia’s Nueva Canción. Gaira Musica Local was launched with the release of Lucía, Pulido’s first really solo album. Although produced by the prodigiously talented composer, pianist, accordionist and organist, Héctor Martignon, Iván Benavides returned to compose virtually all of the music and play guitars throughout the album. The music on Lucía stands out as one of the finest popular albums ever made in Colombia. The musical idiom is almost completely vallenato, a Colombian street rhythm long considered part of the lower class, untouchable culture by Colombian elites. Bookended by Benavides’ amazingly deep and moving chart, “La Hoguera,” the album also contains such gems as “Las Cuatro Palomas,” “El Piano Dolores” and the Caribbean flavored “Circulo Vicioso,” which was probably one of the most enduring melodies that Iván Benavides has ever written.