Artistic genius is something inexplicable; this is at the very heart of its defining physiognomy. Those artists who live with this internal enigma are unable to reveal its mysteries and secrets. Completely absorbed by these contradictions, ill at ease in a world of mundaneness, sometimes alarmed by their own uniqueness snow-blinded by a truth, which common mortals can only dimly perceive, and swept away by a primordial force that is so beyond them, geniuses play like children. A genius views the world with the immensity of the child’s eye; creates and innovates as he or she were born to, for in a genius it is an unbridled intellect that predominates over the will, which, in turn, allows the creation of artistic—or academic—works of pure contemplation, bereft of interest, specific or otherwise. 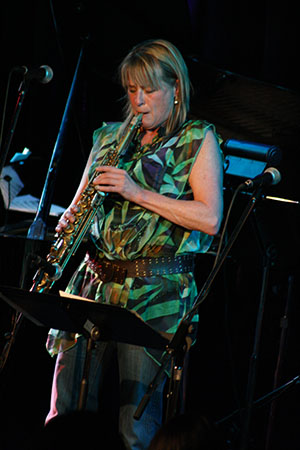 Jane Bunnett belongs to this unique breed of artists and performers of such rare genius, who—like Miles Davis, John Coltrane and Charlie Parker—have a natural rapport with their instrument. When Ms. Bunnett plays her soprano saxophone, or even her flute, the instruments are no longer soprano saxophone or flute, but trumpet, English horn, piano, violin and cello; indeed a whole ensemble. She is the epitomé of an artist in her natural element. She is music dancing in the spirit and in the flesh. When she purses her lips and embraces her reed with them; when she stabs her fingers at the buttons of the saxophone and flute, she is in her natural element. Away from these essential accoutrements she is like a fish out of water.

It might be perceived that Ms. Bunnett plays her soprano saxophone like a man in the same way that John Coltrane might be perceived to be playing like a woman. In both artists, yin and yang nestle cheek-by-jowl. The fluid virtuosity, the colossal harmonics; the raging arpeggios and dazzling runs, together with the inner melodic voices that seem to breathe with a life of their own… and the richness of texture; of tone and overall sound palette, are almost immediately recognizable. These are qualities shared by both Ms. Bunnett and Mr. Coltrane. There is unbridled wizardry and immense style about the playing of both artists. For when they play both seem possessed of a quality that is intangible, yet monstrous, invisible yet larger than life itself. Best of all: this is something that both artists are blissfully unaware of.

Jane Bunnett does not play prettily. Her saxophones and flutes are extensions of her lithe frame. Her musical ancestors traverse the wide landscape of come Valhalla. Spiritually, she owes more to Mr. Coltrane and Pharaoh Sanders than to Steve Lacy, with whom she spent some time in study, in Paris. Her flutes are hyperprismatic, fluttering away with sharp glissandi in myriad conceivable directions in search of the perfect note… the perfect moment to capture—only to set it free—like a beautiful butterfly! Only His Royal Outness, Eric Dolphy has distinguished himself thus! And now Ms. Bunnett does too… She also shimmers like molten metal on soprano sax, often reaching such high and lonesome inflections to the music no one—not even her idol, Pharaoh Sanders—can produce from a reed. You would imagine cross-referencing embouchure—from flute to sax and back again!

Her avowedly ‘late start’ is simply a matter of chronology. She was born with ‘it’—that innate artistry—nascitur non fit—that makes her a rarity even in the holy office of jazz! Jane Bunnett plays sax and flute like they are organic parts of her voice; that grow out of her body and she improvises with such great prowess that she often hits notes and pulls off phrases that only the human voice could sing. Moreover she also writes with such a wonderful sense of self-assurance, dreaming in so many cultural states of mind that she comes closest to becoming a musician sans frontier—something very few musicians are today… Like Pharaoh Sanders and Bheki Mseleku, Randy Weston and Bill Laswell…

Jane Bunnett was once a classical pianist until tendonitis cut short what would surely have been an illustrious legacy… she turned to reeds and woodwinds and her epiphany came when she heard Charles Mingus perform in a big band that included George Adams and Rashaan Roland Kirk in San Francisco. The two big men even stopped by at her table to talk but she was smitten long before that—when Mr. Mingus was delivering his own Ecclusiastics as his legacy unfolded, post-Ellington, as he was touring to promote a new record. Proverbially, her artistic life soared from then on, although it is hard to imagine how she would not have found her own level irrespective of the lives that touched hers! On the contrary, she was born to touch lives, as she created and performed, breathing heart and soul and squeezing every drop of adrenaline through flute and saxophone. Her technique is unsurpassed, but her expression and dynamics are so personal that both flute and saxophone have become virtual extensions of her body. It was as if Charlie Parker had spoken directly to her! “Don’t play the saxophone,” he once famously said, “let it play you.” And then, “If you don’t live it, it won’t come out of your horn.”

Of course she knew that! If Bird did not fire off the anecdote, then someone else might have! Perhaps even a ghostly encounter with the spirit of Bird himself! Jane Bunnett lives in the very heart of history and makes some herself! And the ‘Gnawas’ and ‘Orishas’ are in attendance, watching over kindly it always seems…right from zero hour! In Cuba a sacrifice to the orishas bring forth the wood sylphs and spirits that haunt the heart and mind, undimmed for decades to come, but, perhaps she—osmotin—is not yet ready… Then journeying through the ocean of music, several great names echo through her short sharp and celestial history 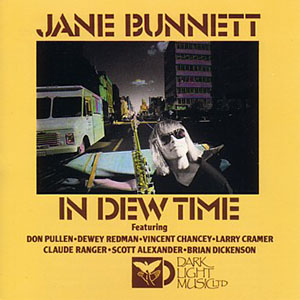 Ms. Bunnett recalled two of them from the heady days in the run-up to making her first record with producer-husband, Larry Cramer. The long out-of-print, In Dew Time (Dark Light, 1988) featured Don Pullen and Dewey Redman. “This was a glorious bonus,” she says, “I would have been happy just to have Don… but then Larry and I thought… well Larry wrote “In Dew Time” (featuring Ms. Bunnett, Mr. Cramer on trumpet and Dewey Redman on tenor saxophone) with Dewey in mind… He was in town and we went up to him during a break in the sets… gave him a tape and he said he’d listen to it… A day or so later, the phone rang and Dewey said: …”sounds good… Yeah, [I’d] like to do it.” As you would imagine, Larry and I were thrilled! I mean to have both Don and Dewey on the disc together… I must have died and gone to heaven!” In Dew Time showcases early Jane Bunnett and Larry Cramer. The writing and playing is so remarkable that it hardly feels like a ‘first’ record… rather a work by already mature artist… a career jump-started to the stars! 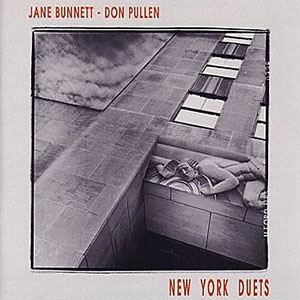 The nervous energy burns furiously and is white hot. Back in New York, Don Pullen is ready for a whole new encounter. New York Duets (Music & Arts Program of America/ Denon, 1989) is an audacious record. Its magic sparks to light a fire in the not so establishment in 1989. Jane Bunnett bristles and surprises throughout. By now she is forming a symbiotic relationship with a pianist who was outward bound, and like Mr. Dolphy, years ahead of his time as well. Mr. Pullen has just come off making an audacious record of his own: New Beginnings (Blue Note, 1988) is full of the explosive fire that launched the pianist into the stratosphere. On Duets, Mr. Pullen is pushed to the limit by Ms. Bunnett with a program that is challenging to say the least. Musicians as matadors…’ musicians as hunted spirits too! …Is Don Pullen is a matador here or is Jane Bunnett…? Both run riot on the inspired program. The renditions of Thelonious Monk are sharp… clearly focused! Don Pullen drives Ms. Bunnett hard and she responds with garrulous saxophones and charming, natural ability to respond to everything that is thrown at her. Jane Bunnett also composes four magnificent pieces—notably “Ginestera”—and arranges and renames a Cuban folk song “For Merceditas” on which Mr. Pullen is restrained and beautiful… almost dream-like! So are “Make Someone Happy,” an exquisite tribute to Eddie ‘Cleanhead’ Vinson and Pullen’s own “Gratitude,” which he wrote to remember “Pops, Duke, Monk, Mahalia Jackson, ‘Trane, Eric Dolphy and a host of others who touched my life.” 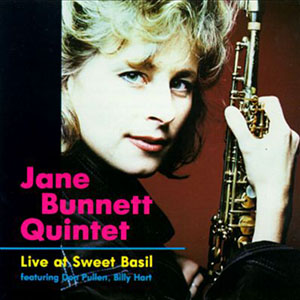 Jane Bunnett’s dynamic is brilliant from the first note… always. She appears to know exactly the sound that will open the heart or the head. Because her attack is on-the-nerve, she is never wrong. She wows her growing audience, New York, Toronto, the US and Canada… but more importantly, the musicians! This is just what it was like when Bird and Diz were swooping down from their heavenly flights, beboppin’ their way to earth fleetingly! So also do Jane Bunnett and Don Pullen swoop down… Live at the Sweet Basil (Music & Arts Program of America/Denon, 1990) next! New York has its first glimpse of the sensation. Nerves fray, but the performance is of the highest order… Mr. Pullen egging on Ms. Bunnett who is ensconced in shimmering galaxy—Mr. Cramer is on trumpet, Billy Hart on drums and another Canadian, Kieran Overs commands his bull! It is a memorable evening, not the least because Jane Bunnett sallies forth—like a piper at the gates of dawn—on a majestic version of “You Don’t Know What Love Is,” blowing the spirit of Eric Dolphy back into our minds and hearts, with Mr. Overs tugging, not gut, but heart-strings and Billy Hart keeping it all at a steady sizzle with brushes arms and legs a-flurry… you almost forget the magnificent Mr. Pullen, until he tears, with quiet fury, the choruses down! And, of course, there’s 16min of “Double Arc Jake” and the inimitable dialogue Don Pullen and Jane Bunnett share, like preachers on a Sunday, Holy Rollin’!