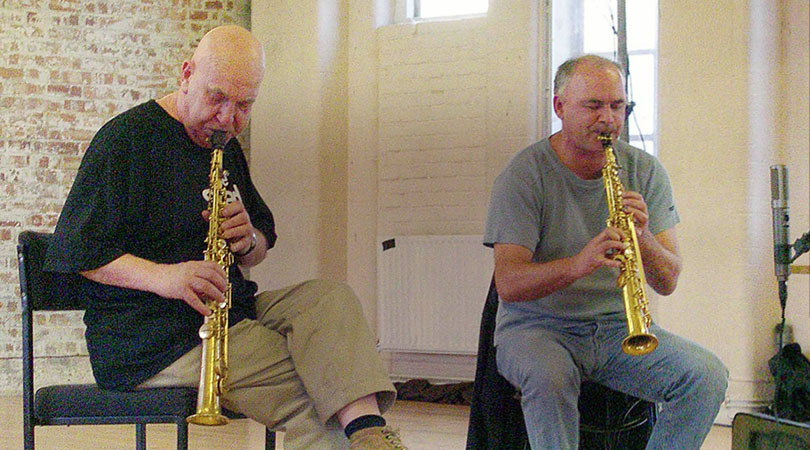 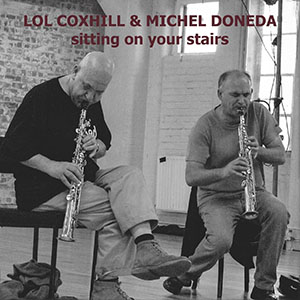 Joachim-Ernst Berendt, the renowned musical thinker, author, music lover and an extraordinary concert producer was well known for his “Solo Now” concert series, which featured the likes of trombonist Albert Mangelsdorff and percussionist Pierre Favre—alone and together too. The concerts were way ahead of their time and allowed the musicians to explore tonal colour and instrumental timbres and textures—rough and smooth like never before. The music on this recording, Sitting on Your Stairs does something similar. Fortuitously, it featured both solo and duet excursions by soprano saxophonists Lol Coxhill and Michel Doneda—both extraordinary and quick-thinking improvisers, who express love of their art in the many-splendored manner in which they risk their lives for every note and phrase. In doing so they invent four transient duets that scale perilous and unimaginable heights of impromptu fantasias that seem destined for the infinite. Both saxophonists are de rigueur on top of their proverbial game and have justifiably dubbed their album Sitting on Your Stairs, an obvious reference to the fabulous musical conversations, which ensued from that fabled soundstage.

The four duets are a full frontal attack on convention. These improvisations are not even like those that roared through New York in the 60s. This music heralds more than future past. It exists in a place of timeless omnipresence. But it is also palpable and vivid. Listening to each is also almost like watching a gigantic rock being chipped away as the semblance of an enormous sculpture emerges; like watching a proverbial Gaudier-Breszka come to life in another time and place. Only on this occasion the saxophonists perform an onerous job as if with the vibration of their reeds. Lol Coxhill creates cognizant sets of phrases that spiral and zigzag into an architectural geometry that consists of a series of parabolas, and sometimes shapes that come together in cuboids. His phrases form a special language that probes the spectral sphere of the shapes that he is trying to mould; something the saxophonist time and time again successfully creates. Michael Doneda is the primordial sound sculptor. His strokes of the tongue against the reed are almost like human utterances—growls and smears that chip away at the invisible shape he is embroiled in creating with an almost elegant savagery. Mr. Doneda also uses his seemingly searing hot breath to form phrases and lines that billow like imaginary steam into an air that is by turns dense with sound as well as witheringly hollow.

Lol Coxhill and Michel Doneda also solo once each and this is where the heart and soul of Dr. Berendt’s concerts might be recalled. In them as in these soli (as in the duets) the music becomes not only an image or series of images that dance and evolve out of the inherent creativity of the musician’s working art, but a narrative of human experiences, comprehensible in the realms of the social and the spiritual as well. Thus the sculpture that emerges as a result of this musical excursion is at once a concrete image and an evolving allegory as well as an epic Homeric odyssey that exists in a timeless place where everything that matters is understood, be it in matters of the outer reaches of sound as well as in silence; in darkness and in light on a seemingly infinite topography of music.

Lol Coxhill on the web: emanemdisc.com/E5028.html