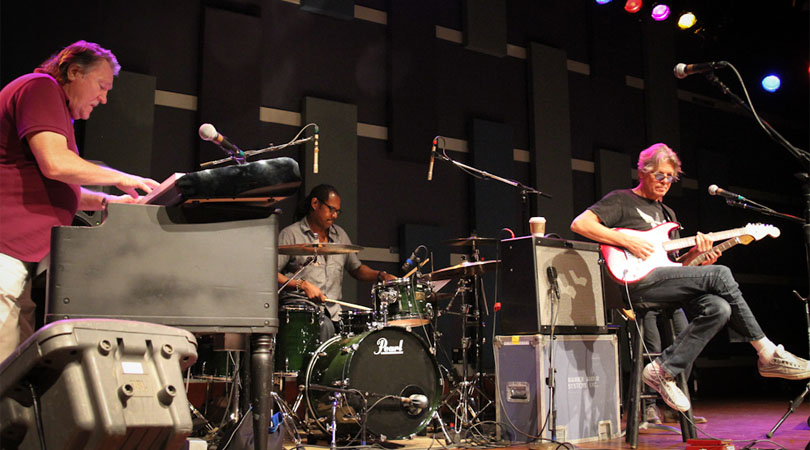 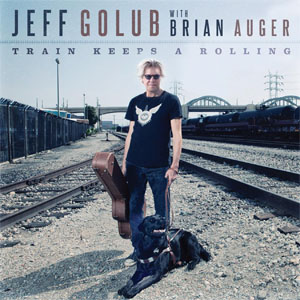 Although he is best known for his work with Rod Stewart between 1988 and 1995, Jeff Golub also made a name for himself playing with Billy Squier and Dave Koz. But Mr. Golub also made his first album as leader–Unspoken Words (Gaia Records)–as far back as 1988 and then broke through to the cognoscenti with Avenue Blue (Mesa Bluemoon/Atlantic Records) in 1995. Then in 2011 he went blind as a result of the collapse of the optic nerve and a year later had a near-death accident when fell on a railway track and was dragged by a train. However, Jeff Golub has been blest with a quiet, almost spiritual strength and he has returned the favour, so to speak, for his remarkable life experiences with a spectacular record with the famous Hammond B3 organist, Brian Auger, entitled Train Keeps On A Rollin, an ironic title for an iconic album. The stellar cast also includes British drummer, Steven Ferrone, vocalists Christopher Cross and Alex Ligertwood, as well as a brilliant young alto saxophonist, Mindi Abair.

However, it is Jeff Golub who is the leader of this ensemble. Mr. Golub is a guitarist with a superb technique. Somehow he has managed to draw inspiration equally from Jimi Hendrix and Wes Montgomery. As a result there is a visceral energy in his playing—where the growling triplets and chords punctuate lines that unfold like leaping impalas. There is also a wonderful geometry to his playing where those hurdling lines assume the shape of dancing parabolas that might also evolve into astounding quartic curves, widening circles and ellipses. In all of this Mr. Golub plays with deep expression and an exquisite refinement wherein he turns melodies inside out and then emerges from these melodic reversals with phrases that cut into a new and emerging harmonic. His mind always racing, Jeff Golub captures the creativity of his every idea in dazzling runs and loping arpeggios that suggest the approach of a virtuoso pianist. And so it is that Mr. Golub has developed into a guitarist with a pianistic method informed by both bold and delicate gesture, expression and dynamics. This is why there is much to love on this album; one that is sure to enhance his growing reputation as an instrumentalist and musician of considerable repute.

Mr. Golub makes great strides as he dallies over flatted fifths and races across tonic scales on Lalo Schifrin’s “The Cat” and it is here, in the bouncing immediacy of the chart that he introduces the second lead voice of the record—Brian Auger. Mr. Auger powers his way through the wonderful chart the way he did when he engineered the Oblivion Express, that fabulous band that melted the high art of the blues with the idiom of jazz. The organist is especially masterful on his own composition, “Isola Natale,” a chart Mr. Auger made famous in 2009 with his band The Trinity, a very late offshoot of Steampacket, a group featuring Mr. Auger and the beautiful, steely voiced Julie Driscoll. That voice is replaced on this album by the horns that feature the brazen voice of Mindi Abair, whose playing elsewhere on this album imitates otherworldly arias, and who is fast becoming a star in her own right. Joining the percussion colourist, Steven Ferrone here is the incomparable Luis Conte, whose role and voice grows by leaps and bounds from “Train Keeps On A Rollin” and onwards—a chart introduced by bounding congas and—if such a thing were possible—a muted electric guitar.

The uncredited vocals on Willie Dixon’s “I Love The Life I Live” is superb as is the guitarist’s raw solo and Brian Auger’s bluesy vamping solo and the Gospel-like preaching exchanges between guitarist and organist. Christopher Cross is an inspired choice for the swinging version of “How Long”. Likewise Alex Ligertwood is masterful in his bluesy voicing of Brian Auger’s “Happiness Is Just Around The Bend” and another outstanding chart, “Whenever You’re Ready”. But it is the amazing relationship between Jeff Golub and Brian Auger that are woven into “J&B” that is clearly the high point of the record that puts both guitarist and organist in the spotlight again. Other remarkable performances are from bassist Derek Frank as well as from Dave Pack, who delivers a sterling vocal performance on a bluesy rendition of the classic pop chart, “Walking On The Moon”. At this point it would be remiss not to suggest—for this music makes it so—that Brian Auger will enjoy a proverbial resurrection as a Hammond B3 keyboard artist just as much as it is Jeff Golub who emerges as a star in his own right with a wonderful musical voice of his very own.

Track List: The Cat; Isola Natale; Train Keeps A Rolling; I Love The Life I Live; Pusherman; How Long; J&B; Happiness Is Just Around The Bend; Shepherds Bush Market; Whenever You’re Ready; Walking On The Moon.

Jeff Golub on the web: jeffgolub.com