Flashback to 1982: Somewhere in the space and time between practice and writing and soaking in the scene in many cities, Jane Bunnett and Larry Cramer take a break. Too broke to find an expensive resort, they gravitate to Cuba. They soak up more than just the Caribbean sun… Happily, the holiday is syncopated; steeped in dance and the rhythm of the night, filled with the haunting sound of ‘clave…’ ‘tumba…’ ‘congas’ and palm-nuts on tray and tapper… The ‘babalawo’ places the tray in front of him and taps rhythmically… ‘Orun-mila’ is invoked, and some other ‘Orisha’ has been placated, for… The spirits danced in the flesh! They came and pirouetted and shook sensuously and endlessly… Cultures begin to collide! Jane Bunnett’s and Cuba’s… Heaven’s gate is opened and Jane Bunnett and Larry Cramer were touched in the nerves of the heart: They kept returning—sometimes for weeks at a time… Until they were drenched ‘on the one’ and to the core with backbeat of the ‘clave’ and the ‘timbales’ and the ‘batás…’ The rest is probably anecdotal, but the music that came forth after the spirits of Havana came out and played night after night with the bravest kindred spirits from a continent away! 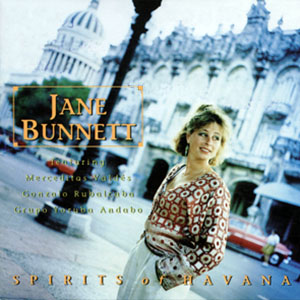 Spirits of Havana (EMI Music Canada, 1991) is one of a kind; one that gives much to the leading edge of Cuban musical thought as it does to the overall language of jazz. The Santeria unleash the heralds… the ‘batá’ and other drums and the chants call down the gods of the Yoruba, while Jane Bunnett’s flute snakes a path through the drumming—playing beautifully off the tonal variety of the variety of drums… this sets the stage for the liturgical hymn of the ‘Lukumi’ and the spirits are drawn out of the skies by the greatest proponent of Santeria ritual music—the late Merceditas Valdés. She is the album’s center of gravity… its attendant ‘Lukumi’ spirit throughout the record. Her husband—the late Guillermo Barreto—who died shortly before Spirits of Havana was completed was the guiding light of the project. Mr. Barreto composed one of its most enduring tracks, the angular “Yo Siempre Oddara,” especially for Jane Bunnett. We keep returning to ‘Lukumi’ liturgy—especially the flute and piano swirl of “Yemayá Asesu”—and much more as the album dances on to the high energy of Mr. Cramer’s “La Luna Arriba,” a John Coltrane-esque romp into the sacred space of the Santeria and the ‘Lukumi’ drummers led by the tumbas of Mr. Baretto and the flaming keyboard work of Gonzalo Rubalcaba—one of three piano masters featured on the record (the others are the formidable Frank Emilio Flynn and Hilario Durán Torres). Jane Bunnett’s flute and saxophone are positively molten, melding into Cuban snakes as if to propitiate a ‘Lukumi’ sylph… The album boils over with liquid flames, into the melting pot of the spirits of Havana!

Divination… sacrifice… steady beat of tray and tapper until the more permanent backdrop of the carved motifs of the tapper and the tray constituting an artistic exegesis of the forces that shape the human experience and the universal needs in the quest for enlightenment!

Much is happening… Both Larry Cramer and Jane Bunnett with songs in their hearts and the music and musicians of Cuba constantly beckoning, are swept away for weeks and months… Cuba always on the molten horizon, Messers Bunnett and Cramer hunker down and focus on some projects that have been bubbling for some time! 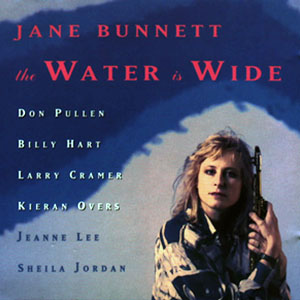 Jane Bunnett appears to have hit her most intriguing and creative yet. The spirits, indeed, have been propitiated! She is back in the studio for an album, The Water is Wide (Evidence Records, 1993) that not only honors some of the finest in music—Rahsaan Roland Kirk—with an almost speech-like flute on her version of Kirk’s “Serenade to a Cuckoo.” She heralds the time spent with Steve Lacy with some breathtaking soprano soloing on two Thelonious Monk originals—”Pannonica” and “Brake’s Sake.” She is like burnished gold on hers and Larry Cramer’s originals—”Elements of Freedom,” “Time Again,” “The Real Truth,” Burning Tear” and “Lucky Strike.” Mr. Cramer is a singular revelation. His brassy tone harks back to Clifford Brown and Booker Little, and he and Jane Bunnett often play off each other the way Eric Dolphy and Booker Little did in their heyday. Mr. Cramer also knows the importance of space and silence and in soloing often reveals a wonderful sense of both—much like another great horn man, Clarence Shaw did, much to the delight of Charles Mingus! The title track, “The Water is Wide,” may be buried towards the end of the disc, but it is well worth the wait. Sheila Jordan and Jeanne Lee grace the vocals and Sheila Jordan is magnificent (on both “You Must Believe in Spring” as well as the title track), while Jane Bunnett reveals an inimitable, sensitive side to her, one that has a huge bearing on the piano work of Don Pullen—especially when he joins her on such moving charts as “The Water is Wide” (as well as on previous encounters, e.g., “Gratitude,” (on New York Duets) and “You Don’t Know What Love Is” (Live at the Sweet Basil). The album is like few others by Jane Bunnett, but it does herald her distinctive voice in the major field of play, although the album—like almost all of her earlier records—does not get the right plug and therefore does not enjoy its just deserts. 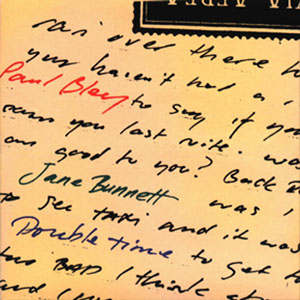 What happens next in the grand scheme of things is both brilliant and enlightening! Jane Bunnett, by now a talent worthy of wider recognition (DownBeat, 1992 and ’93) is far from done with paying homage to some of her mentors contacts Paul Bley to pay on some European dates with her. Bley cannot make them, but agrees to record with her. It isn’t until well into 1993 that things start to fall into place, with an impish call from the pianist to Bunnett and a message, “to call me back, soon, if this is going to go ahead!” Jane Bunnett is left breathless. Double Time (Justin Time, 1994) takes shape on two balmy days in Montreal in August of ’93. Not knowing what to expect was part of the element of surprise. But true to form, Bley refuses to discuss repertoire, except to say that he will not play anyone else’s music…. As a result, Bley, or Bunnett, or both write the entire program—with the exception of the Prince Lasha/Sonny Simmons chart, “Music Matador…” Perhaps written is an overstatement, for there is nothing programmatic about the record. In fact, if anything, charts like “Sequel,” and “B&B on the Rocks” as well as “Please Don’t Ever Leave Me” and “A Dozen Blues” give the record an aura that came with the seminal Kind of Blue (Columbia, 1959) session by Miles Davis! Legend has it that after the record was complete, Paul Bley, so pleased with the results, asks Jane Bunnett with characteristic candor to “fire all the pianists she worked with!” 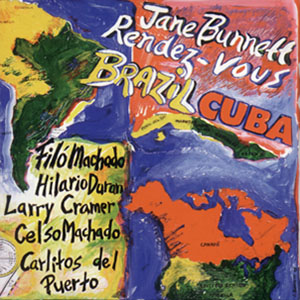 Happily, not only does Jane Bunnett take that with a pinch of salt, she then goes on plunge herself into the music of South America, with two albums, unparalleled in scope and critical success. The first is Rendez-vous Brazil Cuba (Justin Time, 1995), a combustible album featuring the legendary Brazilian brothers, Filo and Celso Machado (guitars, voice and bamboo Jews harp, assorted percussion and voice) and the music of Hermeto Pascoal, Pixinguinha and Jane Bunnett herself. This is another breathtaking record, with music that appears to glide in and out of Brazil and Cuba, pulling in its wake the deepest roots of an art inspired by an ever-moving pilgrimage from Africa to Haiti, to Cuba and Brazil… tracks like “Choro de Pere” and “Forro Na Vovo” leave you gasping for air in the manner of the greatest African-South American musical cultural tradition. It is music that firmly establishes Jane Bunnett as a singularly important musician who has done important things to bring the music of South America to the world in the same way that Machito, Paquito D’Rivera, João Gilberto and Tom Jobim did decades earlier. 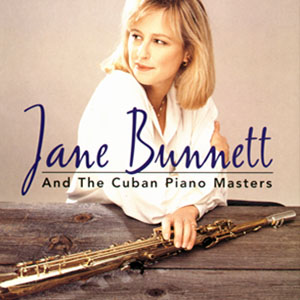 Bunnett is emboldened in her quest for libre for all things African-American…especially those things Cuban! On her next album, Jane Bunnett and the Cuban Piano Masters, (EMI Music Canada, 1996), Bunnett takes on a new challenge—to make a percussion-less record of Cuban music! She dispenses with the heavy percussion ensembles here and (all credit to Larry Cramer, who produces here) joins forces with the celebrated composer and pianist Jose Maria Vitier and the spry, romantic genius Frank Emilio Flynn, who plays solo on his ethereal composition, “Midnight Theme.” Vitier writes and arranges most of the music, adding his own orchestral touch to the music he graces with his piano playing. Meanwhile Jane Bunnett makes another record, thriving on the melodic inventiveness of her partners as she translates their creativity to gentle lilting parts for sax and flute (listen quietly to “Fugado Y Son Nocturno” and to “Tony Y Jesusito”)! Once again, Jane Bunnett also showcases her brilliant technique and just how adaptable she is to various idiomatic dialects that make up the canvas of jazz.

Freed to orbit the musical universe now that the record is out, Jane Bunnett is coursing the Latin landscape and this can only be auspicious for the art of jazz! The ‘Orishas’ and the spirits in Santeria are right royally pleased! 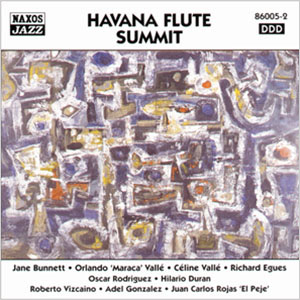 In the run-up to her big push inland, Jane Bunnett frees the flute of its orchestral persona—too prim and proper and less swing, perhaps—as she cuts loose on Havana Flute Summit (Naxos Jazz, 1998). Here she is joined by Orlando ‘Maraca’ Valle, Richard Egües and Celine Valle as well as pianist non-pareil Hilario Durán Torres, who lays down lusty rhythmic grooves along with the battery of percussionists as the flutes of Bunnett, the Valles and Egües soar ebulliently. “Oscar’s Descarga,” Hilario Durán’s thumping “Amanezco” and “Maraca’s Tumbao” provide a perfect foil for Jane Bunnett’s tribute to Don Pullen, “Sunshower” and Larry Cramer’s typically free, “Expectation.”

Practicing your chops is de rigueur in any music—more so in the art of jazz, where, as Bird once said, “you practice…practice…practice…and then you finally go up on the bandstand and just wail!” He was referring to intensity… the only way in which commitment to the genre can be expressed… and also the only way in which you can play what is in your head and your heart! So once again Jane Bunnett stakes her life on her beliefs… Havana Flute Summit is by no means, a minor album set on displaying technique. On the contrary, it is an expedition in to the joy of making Latin music every which way possible, while also bring the flute front and center!