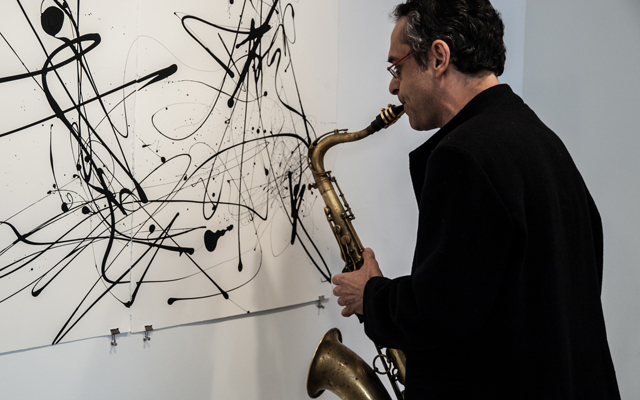 The music unfurls like a piece of tape running freely, its potent sonic images proclaiming jazz in its highest form. Ivo Perelman is busy taking jazz in wild new directions. Great names echo like ghosts from the continuum of future past: Charlie Parker, John Coltrane, Albert Ayler, and Ornette Coleman. Notes proclaim the changing order of things. They smudge into harmonic potash as Perelman lays down the recording like an existential brush. The desired intensity is dissonant in symmetry on the canvas becomes another. The idiomatic lines leap from canvas to canvas and an illustrated melodic book develops as music is added to a literature in a virtual library in the sky to where the bell of Perelman’s saxophone is aimed. 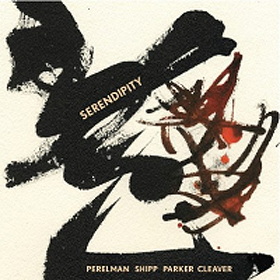 I experienced Ivo Perelman much later than I did Andy Warhol (at Studio 55) and Robert Rauschenberg and Jackson Pollock at MoMA. Perelman probably later. He was just born in the 1960s when the artistic revolution was all coming together in art galleries and lofts. But Perelman appears to have caught up intuitively after moving to the USA. However, the paths of ones fancies always intersect when all things cosmic align. For me Perelman was a late entrant into my bisection of the painters and the musicians. And so it was only 2013 when I came to know Ivo Perelman’s work. It was wholly formed and began to develop along its current path of intuitive brilliance decades earlier, as I soon found out. But things came to a head in this millennium. I feel sure about that. I am haunted by the paintings of Rauschenberg and Pollock again, as I listen to Perelman. Again, I am struck by the aesthetic disjoint between, specifically Rauschenberg’s and Pollock’s view of painting and those schooled in the European’s grand tradition, which could not have been starker. And those pioneering pieces that began in the sixties as the then avant-garde have continued their assault through musical descendants from Coltrane, Ayler and yet Coleman have kept the music in a middle ground between the revolutionary paths of American music tradition, yet as far removed from the European convention as possible. No hangover from contrapuntal music or 12 tone rows. Closer to Coleman than to Bach and in the case of this painter musician, closer to a Rauschenberg or a Pollock than a Rembrandt. 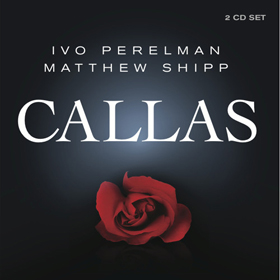 Time, in a conventional sense and tempo does not play a significant role in Ivo Perelman’s music either; at least not the kind that progresses arithmetically. Perelman’s sense of time is more circular than linear and it appears also to include that which resides in the fourth, spectral dimension. His scores therefore are not conventional because they go beyond the staves. Perelman’s concern is with the depth of notes, their viscosity – not merely how they sound but also how they feel and taste and thus how they must fall on the ear and the tongue. Again the painter in him pushes itself to the fore as he searches for expressing what he hears and feels in his head and what his tongue comes into contact with as each note spouts forth from his mouth via the reed and the wind of his horn. He is such a voluptuary and he makes you feel like one if you want to listen to him the way it is intended that you do.