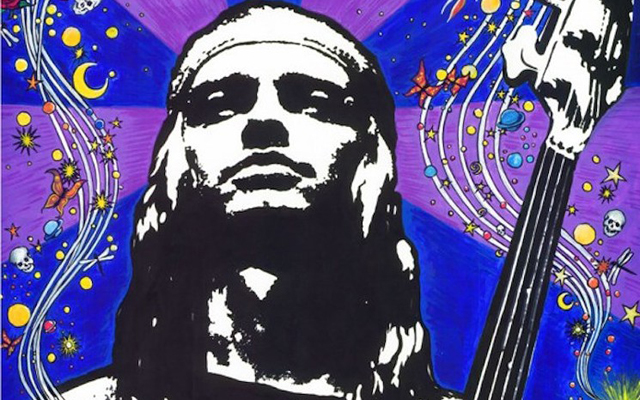 Supernatural phenomena cannot really be explained. You can, at best make a brave attempt at doing that. Even scientists are often hesitant to jump in. What we do know is that they exist. A Buddhist monk meditating high up in the Himalayas, in the dead of winter with nothing but thin saffron robe on is one such phenomenon. The classical composer Ludwig van Beethoven is another, as is the alto saxophonist Charlie Parker. So is the pianist Martha Argerich and so is Jaco Pastorius. Musicians have never really qualified as being supernatural. But the preternatural lives of those musicians that defined them and their music cannot really be explained in normal terms. You might try: they were influenced by so-and-so, practiced day and night for years until their instruments became a part of their bodies… quaint, but that hardly explains the impact that they made on the world of music.

The problem is that we have to use normal terms to describe the paranormal lives and work. The term genius might be appropriate, but the term itself and its effect on a person are hard to define. For one thing artistic genius cannot be explained. Indeed this is its defining characteristic. Those who live with it are unable to reveal its secrets. Absorbed by its contradictions, ill at ease with the real world, alarmed by their uniqueness blinded by a truth that common mortals can only dimly perceive, and swept along by a force that is beyond them, geniuses play like children. Baudelaire made no mistake when he wrote that “genius is no more than childhood recaptured at will”. 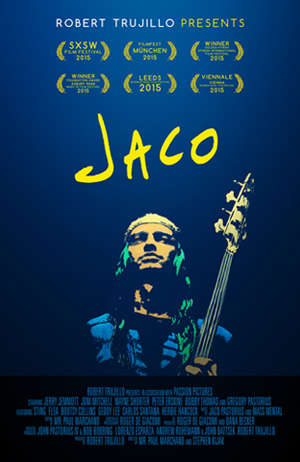 And so it was with Jaco Pastorius, a performer of genius who had a supernatural rapport with his instrument. When he played the bass, it was no longer a bass; it became a piano, a violin, a harp, a clarinet, or the whole crashing orchestra together. It was music in spirit and flesh. When he plunged his fingers into the bass, he was in his supernatural element. Away from it he was like a fish out of water. That is the reason why he was pathologically unable to endure the extramusical constraints that an artistic career entails. That might explain the slow and torturous disintegration of his life, his agony of his love of family and his children, but also the self-destruct button that tore them apart. It would most certainly account for his uncontrollable descent in to the hell of human existence.

The makers of this extraordinary documentary Jaco seem to have unwittingly stumbled upon an understanding of how the script of Jaco Pastorius’ life unfolded. There is no other way to explain why this film of almost two hours is so on the money. Robert Trujillo and the producers simply facilitated the film in a manner of speaking. The script is Jaco’s; it is written and directed by Jaco. There seems to be no other manner in which this film could have been made. And yet this very accidental creation that makes the documentary a great one. In a sense it is cinéma vérité of the very best kind. Though there is absolutely nothing crude about it (as true cinéma vérité might me) in terms of exposé, it combines the very best of that genre with an extremely high standard of documentaries.

The film also reveals what we all knew – at least those of us who lived Jaco’s life vicariously. That his relationship with Josef Zawinul, for instance, was a tempestuous one. It posits that Zawinul – an alpha male – was not ready for his compositional turf to be invaded by someone of such as extreme genius of Jaco Pastorius. Why else would he speak so disparagingly about Jaco Pastorius’ Word of Mouth album, calling it the work of a ‘high school band’? But Zawinul was also an ardent admirer of the bassist. He certainly hired him, fostered his growth into Weather Report, but he disparaged his work and made it very difficult for Jaco to even have his music included on Weather Report albums. Others were more welcoming. Wayne Shorter seems to understand him best. The parts about his music are also revealing. Both Bobby Columby, who produced Jaco, the bassist’s first record for Epic, the A & R men at his Warner Brothers and Peter Yianilos were invaluable to both the film and Jaco. There were friends, who Jaco either did not know existed – like Peter Erskine, Robert Thomas and Jerry Jemmott and Anthony Jackson II, friends that Jaco Pastorius never even knew existed, but who were witness to tragic demise, powerless to help him.

But most of all the film gives life to some of his finest music. The making of Crisis, which opens Jaco’s seminal album World of Mouth is visceral and exciting. It makes the blood run faster. Teen Town is another and there are a myriad of examples of how the music unfolds. We also come face to face with Jaco Pastorius the family man and the love he had for his family, his wives and most of all, his children. Although this is something that is never explained and there is even a certain bewilderment on the part of the children in the scenes in which they appear. Despite all of this reactions of family members to this you experience their heartbreak and their pain. Ultimately the documentary succeeds because of this aspect… that and its brave attempt to come as close as a film can to discovering the genius and mystery that is the supernatural phenomenon of Jaco Pastorius. And for this we will forever be thankful to the makers of the film, to Robert Trujillo in particular. BUt most of all we will thank Jaco Pastorius for giving us his music and his short and brilliant albeit tragic life.