Anthony Braxton & Derek Bailey
First Duo Concert
EMANEM 5038
Guitarist Derek Bailey and his great American star here, Anthony Braxton, are arguably among the most influential musicians – at least indirectly. Freedom-loving woodwinds players like Scott Robinson and others in America would surely credit Braxton (among others, perhaps) with shaping their approach and several guitarists – whom I shall not name – have secretly confessed to Bailey being a role model. So what a treat to hear these venerable players together in a sparkling show that belies their combined years. I might add – rather indulgently, of course – that the front cover photograph is welcome bonus being as it is one captured by the legendary Val Wilmer. Not that Jak Kilby’s photograph of the musicians at the performance is not a fine specimen… 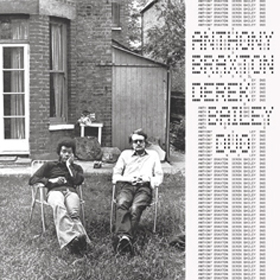 Anthony Braxton comes to the performance bearing his myriad horns and is at his very best on each one. His performance may be described as masterfully reckless; the winds player, after all, upends every kind of convention that he comes from – jazz, classical and even free improvisation. Yet any suggestion of random acts of musicality is hereby disavowed. Braxton is a master of the intellectual and the intuitive, and this is what makes him both inspiring and elusive as well. Both sets combine the compositional forces of Braxton and Derek Bailey. The guitarist is never anything but on top form throughout. There is never any intention that one musician should outshine the other. Both are equally magisterial and add otherworldly colours to these spectacular two sets of pieces.

Steve Lacy Quintet
Last Tour
EMANEM 5039
While on the subject of influential stars no one soprano saxophonist – including the great John Coltrane – epitomise the straight horn better than Steve Lacy. Probably the most important soprano saxophonist since Sidney Bechet blew the straight horn, Lacy not only wrote great music for the soprano saxophone, but also was – with trombonist Roswell Rudd – responsible for transposing and curating some of the greatest repertoire of pianists Thelonious Monk and Herbie Nichols o themselves icons of many generations to come. The performances not only document the last recorded tour by the great Lacy, but offer several firsts – including recitation and a bringing together of disparate compositions and improvisations – that the saxophonist had never done before. Martin Davidson’s excellent liner notes provide details, so I shall not.

The group comprises Lacy’s wife, the vocalist, Irene Aebi, his beloved rhythm section of bassist Jean-Jacques Avenel and drummer John Betsch. Also blowing his heart out is the wonderful trombonist George Lewis, another great stalwart of the free improvisation scene, heard here in various roles demanded by Steve Lacy’s music. The music is joyous, dancing and like Morning Joy, Blinks and In The Pocket are filled with wonderful surprise and are altogether engaging. Both Lacy and Lewis continue to ring in the changes, but their soli reflect a very sophisticated form of improvisation that also makes for changes in mood, structure and tempo. The considerable degree of balance and integration of melody, harmony and rhythm, of composition and improvisation, of exploration, individuality and tradition is impressively maintained throughout. The music has a sad twinge to it because it was the last that Steve Lacy played on tour before he succumbed to cancer.