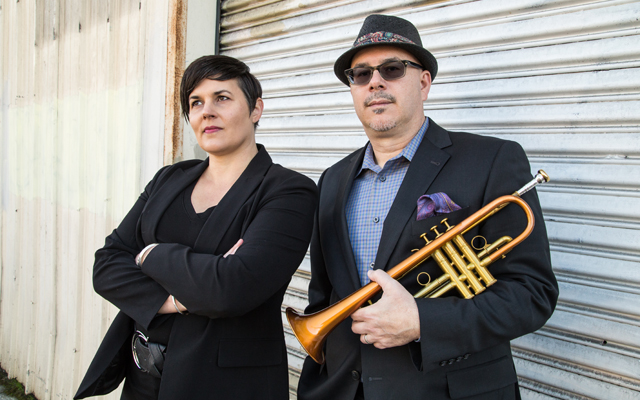 It is impossible to resist the charms of pianist, composer and vocalist Jenny Maybee and trumpeter, composer and producer Nick Phillips. Both of them make beautiful music expressing the sheer joy of being alive. You sense it in the augmented chords that Maybee plays on her piano, then leaping like a mad gazelle to catch its essence with her voice. And if you allow yourself to be distracted from her voice for a fleeting moment to catch the note; a sonic breath expelled from his horn, you will realise that Nick Phillips is also reaching joyfully for the elusive perfect note. Two artists, two bodies and yet united in a singular soul, each exploring the magic of the other’s voice, coaxing each other to caress each other’s artfulness. Intoxicated. Enraptured. Expressing the sheer joy of being alive and in love with each other’s artistry…

This is how you discover them. By succumbing to their spell, their beguiling web of music that falls upon you like a diaphanous and intricate shroud of gossamer. This is what happened to me when I first heard the music of Haiku an album of music that Antje Hubner, their publicist shared with me a few weeks ago. The tingle I felt running down my spine was not only due to the finely wrought vocals and trumpet playing. I was also captivated by how it sounded – what chimera the music engendered as it escaped from my speakers. And then there was also the tantalising dualism of Maybee’s and Phillips’ poetic fantasies – the sensation that nothing is ever quite what it seems – made itself felt in other ways, not the least in the set of eleven delightful miniatures evoking the elusive flutterings of butterflies in flight, the musical gestures fuelled by a natural lyrical tendencies, exquisite dreamscapes with an exultant surge that appeared genuinely inexhaustible.

Getting artists such as these to speak about artistic and mundane matters, I felt, would break the spell that was holding me. And yet the temptation to find out what made them tick; what made Haiku the record that it became was too tempting. And so this is how our three way conversation devolved. The surprises it revealed from talking to artists so completely one in being on their recording and yet so wonderfully apart in real life are telling. We talked mostly about music. It just felt right to do it and it revealed a lot about the musicians, especially about the writing process and about this their beautiful 2016 recording, Haiku, which is reviewed at the end of this piece: 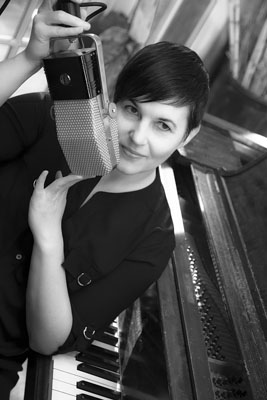 Raul da Gama: How do you divide your day? Do you spend time practicing? Some time writing?

Jenny Maybee: I spend time practicing in the morning: exploring sound, working on technique. When an idea that has been percolating feels ready to hatch then I sit down to write, usually later in the day. For songs, often the lyrics and music come at the same time.

Nick Phillips: Practicing my instrument is a daily discipline, whereas writing music tends to be more sporadic and happens when the muse strikes, often on a Saturday or Sunday morning. That is, unless I have a scheduled date to co-write a song with a collaborator.

My regimen is to practice my trumpet from 8:00am – 9:00am each weekday morning (usually longer on the weekends). Then I hit my desk in my home office at 9am and start my work day. I find that this discipline of playing my trumpet in the morning is a form of meditation and it really helps to ground and center me for the work day ahead.

With regard to songwriting, if I start out by writing a song alone, the music almost always comes first. It just so happens that was exactly the case with the title track “Haiku,” “You,” and “Now and Then.” The music was written first.

RDG: Why do you write music? What is the first impulse you feel when you sit down to write?

JM: I write music because I enjoy the process; the feeling of being in the flow. I have a sensation that I’ve learned to identify as “a song is coming” so I choose an instrument and start playing and singing and explore what sound wants to come out. When I notice something that catches my attention I start to write things down. The impulse feels exciting because it’s like going on an adventure and I know I’m going to discover something new and I’m eager to meet up with it. Also, I make a regular practice of sitting down to listen and write because it feels good.

NP: I just get a creative impulse to sit down at the piano and start writing. I always NOT to judge and criticize the music as I am writing it but rather try to let go of all that and get into a focused meditative state from which the writing flows. The critic and the editor in me can always review and tweak the music later but I feel it is very important to let go of that and get out of my own way when I start writing a new song.

RDG: Is there any ritual when it comes to writing? Or do you have a favourite spot or place where you like to be when you are creating? By the lake, the sea or some such place…

JM: No set ritual, other than getting relaxed and mentally focused to get into the flow, which might include meditating, or doing some free improv, or exercise, or even washing the dishes. Then I go to the piano or guitar and write. I do like to spend regular time at the ocean and hiking, which easily tunes me into the writing zone. I often hear some ideas there and then go home and flesh them out more at the piano.

NP: Most often the ritual is sitting down at the piano — on a Saturday or Sunday morning when I don’t have a restriction on how much time I can spend in the writing session and when I’m mentally “fresh”– with a cup of coffee in hand. More often than not, once I start playing the piano, my cat “Ella” will be inspired to join me, which has also become part of the ritual.