Here now are six of the not-so-many releases that EMANEM has issued in 2015 in no particular order. A seventh release also by John Russell was reviewed here…

Marcio Mattos
SOL[os]
EMANEM 5035
Bassist and cellist Marcio Mattos’ playing on SOL[os] bristles with incendiary pizzicato passages. His ‘light’ bowing technique is equally suited to the cello, which he plays on six of the ten tracks on the album. But his bass lines are gruff yet often airy in some longish spells. On both instruments, though, Mattos displays a golden timbre and fleet elegance. His work can be fiendishly difficult, with much of its virtuosity reserved for the soloist’s long accompanying episodes. The work, Prominence, which concludes the album is played on double bass, with electronics added on, is a fine example of how the music unfolds throughout the cello and bass passages, both of which have been generously supported by electronics. 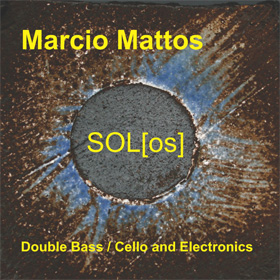 Mattos has the measure of not only his challenging work, but his instruments as well, delivering the double-stops with airborne grace and tight precision; and the virtuosic figures never seem to lose direction. He revels in the spacious improvisation of the music’s curious, short fast movement, combining incredible vocalise with insouciant runs. These recordings were made among those not made by Davidson. In fact Marcio Mattos made them at various locations. Album notes suggest that these were between 1990 and the mid-2000s. The Brasilian is one of the relatively few Cariocas to have broken free of the commercialism of Bossa Nova (the other is the tenor saxophonist Ivo Perelman) and in choosing free improvisation probably finds himself better served in Europe. It’s hard to see this not being of great benefit for Mattos as this album shows him to be a musician of great sensitivity and imagination.

The Milo Fine Free Jazz Ensemble – featuring Steve Gnitka
Earlier Outbreaks of Iconoclasm
EMANEM 5206
The tapes for this recording date back to 1976, 1977 and 1978. These tracks include ten brilliant improvised charts making up the music of Hah. The recordings were taped by the musicians at performances in the United States and were first issued on the hatHUT imprint between 1976 and 1977. The second composition – The Constant Extension of Inescapable Tradition was also released by hatHUT, but in 1978. This double album also includes When I Was Five Years Old, I Predicted Your Whole Life was, we are told, recorded in 1978, intended for release in 1981, but this was never done so. Dates and discography details are important because recordings such as this one pre-empted much of what is happening today with free improvising duos, not only in Britain, but in the USA as well. 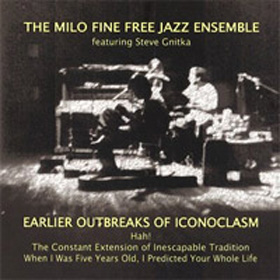 Both the multi-instrumentalist, Milo Fine and guitarist Steve Gnitka are spirited improvisers. While studiously avoiding traffic from each other the musicians still manage to buzz around each other like ferocious gnats encouraging each other, it would seem, to draw first blood. The work on piano, prepared piano and bowed cymbals by Fine may owe a debt to John Cage but his work on the clarinet seems to come right off the top of his virtuoso head itself. Likewise, his drumming up-ends all conventional notions of time and rely solely on pulse-generation. Gnitka is likewise inspired in his own way and his extraordinary imagination makes this series of recordings essential listening for the discerning listener. Milo Fine also notes that the title of Earlier… was conceived as a link to the Lp Another Outbreak of Iconoclasm (Two Eggs; Slightly Beaten) (Fusetron 010, 1994).