Veryan Weston, Jon Rose, Hannah Marshall
Tuning Out
EMANEM 5207
It takes courage to take on instruments that can be played but rarely mastered. Yet violinist Jon Rose, cellist Hannah Marshall and the most compelling keyboard player, Veryan Weston (heard here on the rare and beautiful tracker organ), who had long since taken up the gauntlet thrown by their individual instruments have turned these performances in Liverpool and Sheffield (as well as in York, Newcastle and London) into master classes for students and aspiring musicians who wish to put them to use in music as a whole – let alone free improvised music. The intense concentration of the great improvisations by the triumvirate – played with conspicuously warm tone and statuesque gravitas, with exquisite light and shade – is absolutely and elegantly stunning and acts as a palate-cleansing sorbet. 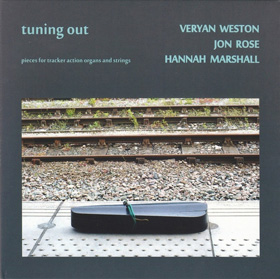 Should you have been listening to some raucous material and then come to this recording (on two discs) you are likely to find your mood artfully relaxed and dispatched into a stratospheric realm with airy grace and charm. It is impossible to pick out any one musician from this trio to suggest leadership or even setting the tone for the pieces, although I suspect Weston could have been summarily designated to guide this seductive music with his almost magical-sounding tracker-action organ. It is not my intention to suggest that Rose or Marshall fall anywhere behind. On the contrary they are very much part of the excitement. However, the sheer power of this particular organ is more imploring to the ear. All three musicians do play with sinewy and elementally flexible transparency. Bravo is a cheer that comes instantly to mind.

John Russell, Phil Durrant, John Butcher
Conceits
EMANEM 5036
Connections indeed. This excellent album is like a railway system linking minimalism, jazz, surrealism and free improvisation in the style of the post-serialist 21st century. But I would be remiss if I did not also suggest that to even describe it as such gives the impression of overcooking when in actual fact it is anything but that. It is a masterpiece of intellectual and intuitive music performed by saxophonist John Butcher, violinist and trombonist Phil Durrant and, the acoustic plectrum-playing John Russell and it will have you spellbound. The music is a masterpiece of both subtlety and gumption, although the two facets of the music collide often. 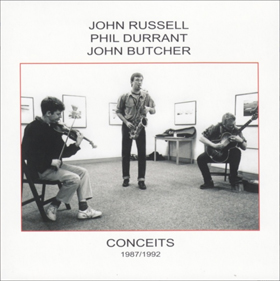 And when they do, the music gats racy and unpredictable, and extraordinarily challenging. The group plays as one. Telepathy is de rigueur and breaking with that convention would not be an option it seems. This is why the music, while the sheer freedom of it is exhilarating, is so hermitically sealed. The surprises, when they come, are effective and discreet; a gamelan-like riff is played by Russell as pizzicato harmonics, a delicate curlicue of a bass line pronounced by the cello underpins what sounds like a Gaelic lament and a close-knit trio passage develops from a single phrase. Tumble is perhaps the high point of the disc, but then I suppose I am being subjective. Still I find that and Soft Hours and Solitudes also fascinating. The recorded sound – both studio and live – balances detail and warmth. A great record.