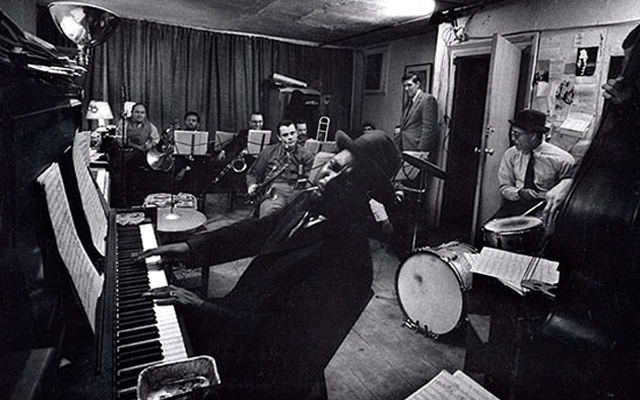 Four false starts! I feel like the odd one out in a band led by Monk. The only one perhaps who cannot figure out or has not yet learnt one of Thelonious’ new songs and we are about to start playing.

New music by Thelonious! Oh! Wish that were true!

It is November the twenty-second, nineteen sixty-three. There are to be no piano lessons for me today. The study is silent. Across the hallway, I can hear the radio. My aunt and music teacher returns from another room and announces that President Kennedy has been shot dead. Murdered by a “crazy animal,” she says. I hear whispers of “shadowy group” and “gangsters.” My aunt decides to cancel the music lesson. No talk of Beethoven. None about Bach, Mozart, Chopin or Liszt either. My aunt decides to mourn the death of President Kennedy. Eight and alone, I sit in the dark of my father’s study. “Go do something with your time,” my aunt says. I slide off the piano stool and walk over to the shelf where the vinyls are neatly and alphabetically stacked. 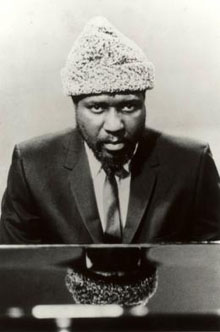 I slide the record off the shelf. It is entitled The Genius of Charlie Christian. An amateur recording was made in 1940-41 at Minton’s Playhouse. It is a bootleg. The cover color is a ghastly shade of orange, with a drawing of the guitarist—very old-fashioned. I don’t care. I flip the record over and read from the top. “Featuring Thelonious Monk, piano; Kenny Clarke, drums; Nick Fenton, bass; Joe Guy, trumpet and Teddy Hill’s band.” The legend: “recorded at Minton’s Playhouse in 1940.” catches my eye.

I am fascinated by things that happened before I was born. I read on and as my father is not in the country I muster the courage to walk up to the gramophone and put the vinyl on the turntable.
The room is dark and lit by the eerie glow of a red lamp that sits on the family altar. My grandmother had bought this from the Fatima Shrine in Portugal. I pretend that I am at Minton’s and place the tone arm of the gramophone on the vinyl. The hiss and crackle is deafening, but then the music comes on in the middle of a bar and I forget everything but the music.

The room is now smoky and has shape-shifted. I am at Minton’s Playhouse. Monk is playing on a lousy piano, but he is self-absorbed. The tone is sharp and when I tune in everyone is swinging madly. Swing to Bop! Klook is dropping rhythmic bombs on the bass drum, firing rim shots on the snare. Monk, flat-fingered, intense, in wild and dissonant harmony. until it’s time to revisit the melody with bright new statements in sound. Nick Fenton is walking steady and Guy is flailing his trumpet, getting rid of the saliva. Then polishing the bell and his brow with a white handkerchief.

Christian is playing fluid lines up and down the fret board, mixing it up. Never heard that before. But it is Monk who is drawing some attention as well. Someone says, Dizzy’s here today but no one sees him. He loves what Monk is doing. He tells Bird. We got to get together with him. 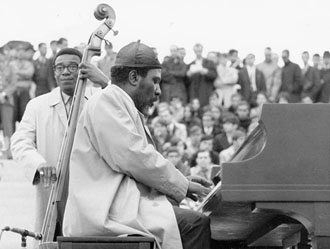 Suddenly I am afraid that I will be discovered and will be thrown out of the place. I slink deeper into the corner, behind the piano. The song ends. A few of the people clap. Most are too busy getting drunk. Somebody counts off the next number. Kenny “Klook” Clarke or Joe Guy. Up on Teddy’s Hill… Monk strikes the keys with a splayed hand. He plays a minor chord. And then a rapid run, which is surprisingly quick considering he does so with flattened fingers, taking his right hand over his left as he heralds the melody squeezing out five notes in a triplet! I have never heard anything like this before.

I practice Bach partitas for hours every day. This should have been an affront but it is not. I am totally seduced by the sound. And the harmonics and the rhythmic intensity. Smitten by the sizzle and bop of Klook’s accents on the ride. Christian returns from his wild ride and now it is Monk’s time to soar—all too briefly he delivers a sermon with a new syntax and a new language is born of his invention. His fingers are chipping at the melody and a new harmonic design he builds a towering edifice in the new soundscape. Christian trades bars with Guy. Klook drops more bombs. Monk is all over the piece. It ends as suddenly as it began “Stompin’ At The Savoy!”