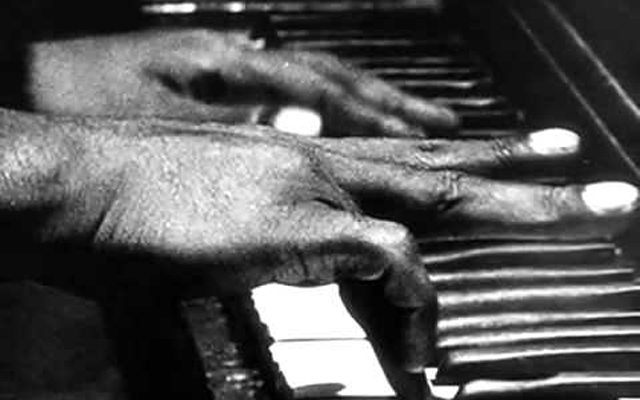 It is always edifying to be with Trane and trade riffs and solos. Just as it is also good: all the times he is with Rollins and Johnny Griffin; Pettiford and Clarke. They want to make him an institution suddenly. Everyone is taking notice. One of them is Hall Overton. He scores Monks music for orchestra and Orin Keepnews makes a date at the Town Hall. Hmmm. Interesting new textures emerge. A new twist to His Monastic Outness and the music of course. This is serious. Why should it be? Monk appears out of it although the music is a big success. Overton says: “He has a very selective approach to sound. In a sense, he abstracts from the fuller type of jazz harmony. It isn’t that he doesn’t know the full harmony—he’s played it for me but he does know those particular sounds he wants and so his harmony is lean. Incidentally there is one thing he does that may or may not be conscious, but that he does along with the spaces he leaves in his chords. He plays with flat fingers; his fingers are splayed out, not curved into the keyboard and as a result, he can resist the temptation to play full chords.

“As a whole, Monk is an excellent example of a non-conformist in a field that’s very cliquish and conformist despite the legend that every jazzman is an individualist. Monk always stuck to his own way, and it’s finally paying off.”

Monk is forty now. Technique: “Flat fingers.” Who the hell cares, I don’t! The music is important. Listen to what it is trying to say. Oh well! Time to move on, I guess. He moves from bed to piano and back to bed. Or he might go over to Nica’s. Nothing much to say. So listen to the music.

At Columbia in to 60s, Monk is a god. The world opens up to him and he records and performs with abandon. He had a new quartet and he forms the lasting relationship with Charlie Rouse. He travels to Europe, to Japan. The Monastic Legend spreads far and wide. He wows hundreds wherever he goes. Oliver Nelson repeats the Big Band readings of Monk’s charts. The ever-present Teo Macero. But Nelson does a great job and Monk is happy.

You would think that people would read him the way he wants to be read. for the moment, of the moment. After all, who cares where jazz is headed. It could be going to hell, for all I care. Listen to the music. The music is important. Nothing else matters but the contribution of the music. 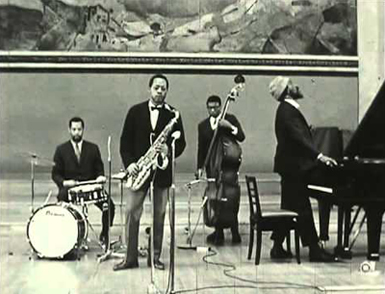 People ask what about Trane? Well, what about Trane? He’s an important musician and he’s going places, I suppose. Change the world and all that. Who cares? Now there’s a working Quartet. All ears on Rouse. They compare his work to Trane and Griffin and. Well what next? Charlie Rouse is to Monk what Strayhorn is to Duke and Dannie Richmond is to Mingus and so on and so forth. None of the others had a dry, muscular tone. None of the others read Monk charts like Monk wanted them to be read. None of them delivered day in and day out and there is something to be said when you come to the music each day and you too can read the angular notes and play the angular chords and just breathe in the spaces between. Rouse reads Monk charts the way Monk likes them to be. Sometimes just a hand signal is all he needs. So that’s just the way it is and the way it will be.

Monk to quartet: Let’s funk up the repertoire. And here are some things blue some things new. “Green Chimneys,” for instance. “Ugly Beauty” and “Boo Boo’s Birthday.” AND Monk is heard around the world. Legend has it he is otherwise close to taking a vow of silence, before his time.

Monk to guy in elevator: Nice to meet you Mr. Macero. Then to self on the way out of the building: This piano sounds terrible. It’s out of tune. But the music is mine.

Monk walks out. He dances to the rhythm of “‘Round Midnight” as he disappears across the plaza and into the darkness. Save Nellie and the children. No one else sees him again, except perhaps ‘Nica. No one. Not for a long time. Generations mourn for Monk—and, with the exception of the musicians—none with as much as an iota of remorse.

In 1999 I started to write for All About Jazz. Michael Ricci was a gracious publisher and was open to my many ideas, on eof which was to start writing a column Highly Opinionated. It was meant to be a column that would include only my features, very personal accounts of my journey into Jazz. This feature first appeared in that column on February 14, 2008. I was surprised by the reaction to it as it was viewed 27,578 times. As I was watching Thelonious Monk’s son and TS Monk and his sextet celebrate his father’s 100th birth anniversary. a terrific drummer, Mr. Monk appeared with pianist Theo Hill, bassist Chris Berger, tenor saxophonist Willie Williams, alto saxophonist/flutist Patience Higgins, and trumpeter Randall Haywood. April May Webb appeared with eth ensemble and sang memorably… I thought I’d add my personal discovery and experience of Thelonious Monk’s music as a birthday gift to a man I consider to be one of the greatest musicians of all time.