Home Masthead Crepuscule with Thelonious
Bird and Dizzy get together for the last time. Monk is there. It is June 1950; Granz puts the whole gig together. All Birdsongs. But Monk slants them ever so slightly and gives them a stamp they never would have had without his harmonics. They now also have a touch of humor. “Bloomdido.” “Mohawk.” “Relaxin’ With Lee.” “An Oscar for Treadwell,” “Leap Frog” and “My Melancholy Baby.” Bird asks to play with Monk. He gets his wish. The tracks are laid down. They are spectacular. Bird groans with pleasure sometimes, as does Russell and Buddy Rich. A piece of history.

Orin Keepnews blows by and leaps in. He is riveted by Monk. He brings him on board and brings in Mulligan to play with Monk. This is magic. The legend of Thelonious Monk begins to spread across the country. Now he records with Trane and Sonny Rollins, Ernie Henry. Miles and Clark Terry. Monk is the Holy Grail. Monk delivers a dissertation on his schematics. It is not about the math and pitch of notes. It is about the sound and tonal quality of the music. He is faithful to the melody, but the harmonic scheme is his own. 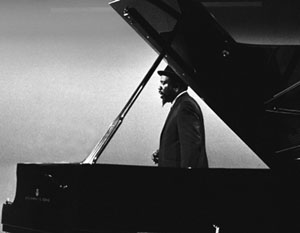 and then some when Monk and Pettiford and Blakey get together and drop six standards on tale for Fantasy.

Monk remains faithful to the melody in a traditional way. But his harmonic system is very personal. In fact he abandons the original harmony and substitutes it with his own structure, while continuing to refer back to the melody. His harmonic approach has to do with the ingenious sense of voicing chords in a dramatic dissonant way, casting it in broad relief because of his precise and wonderful sense of rhythm.

Monk is all music: Not part piano and part music. He is all piano AND all music. Monk and Trane build a lasting relationship. His cabaret card restored in 1957 he lands a date at the Five Spot and Coltrane says he is attending the Monk School of Music.

Monk opens Trane’s mind at the Five Spot. Trane returns the favor at Carnegie Hall. It is the night of the twenty ninth, nineteen fifty seven. Monk is majestic. There has not been a venue so large in a long time, or a piano so beautifully in tune. Monk soars into the stratosphere! Trane, now almost fully grown follows suit. In brooding conversation, they discuss Monk’s Dream, swinging gently as Monk travels across the keyboard like he is stroking the body of his beloved. They don’t stop here. Monk is warm now, and launches into “Evidence,” then “Crepuscule” with Nellie that maddeningly up and down harmonic wonder that seems to search but never find its harmonic centre. and just when you think that it does, Monk changes the chord. The group survives. and launch into “Nutty” and “Epistrophy.” Later that night, they begin with “Bye-Ya,” Monk leads then into “Sweet and Lovely,” one of a handful of standards that Monk pulls out from his repertoire. Then “Blue Monk” and “Epistrophy” to close the set. And the historic concert.