Home Masthead Crepuscule with Thelonious
Monk is New York and New York is Monk. Spiritually and physically. He and his piano and Nellie and the musicians and the folks who dig him… and those who don’t, but listen nevertheless… all live in the parallel universe. Here Monk has epiphany after epiphany. He writes out of a vision that is 3-dimensional… sound and vision. The work is incomparable. Thelonious… a mirror image designed and built from one conundrum after the other. “Ruby My Dear.” Thick yet tender. “Well You Needn’t…”. two-fisted ironic… shame on those who did not comprehend follow the line of sight to learn of the new vision. “Epistrophy…”. the duterocanonical, epiphonically-speaking gospel according to His Monasticity… the Law of Monk. Gravity is suspended from the sky and harmony loops like magic, connecting the past with the present and the future in a magnificent ring of energy. Then Monk makes time stand still as we breathe in, circulating that which we breathe… our lungs awash with the purifying fire and the perceptual light of Thelonious. Ah! Now Thelonious’ voice: The quintessential epistle born of tradition and steeped in modernity for generations to come, trinkling down from Arrarat, or Sinai like the most tender, liquid cleansing fire. “Round About Midnight.”

I am struck by the music. It is fat and round and comes from a perception never experienced before. I am drawn in just like I am to the Dutch artist, Maurits Cornelius Escher… who has a vision no less beguiling…

Escher’s paintings, like the rhythmic certainty of Monk’s pieces, have an intuitive sense of mathematics. And like Monk’s beguiling harmonic schematics, Escher’s schematics are just so. Like “Drawing Hands,” in 1948, two hands, (Monk’s running through any of his compositions?) are caught in their own embrace as they paint (Monk’s would play) a prototypical schematic designs. Sky and Water where fish ascend from sea to sky, transmogrifying into birds once in the upper atmosphere of the landscape. “Ascending and Descending,” 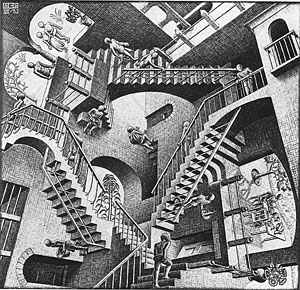 a tantalizing 1960 lithograph where people exist and go about life on different planes all at the same time, just as he did in an earlier (1953) work, “Relativity.” The mystifying work best describes Monk’s vision of sonic architecture. I apply it to a number of his songs as I spin a Monk record. Any record. Here’s why:

In the world of Relativity, there are actually three sources of gravity, each being orthogonal to the two others. Each inhabitant lives in one of the gravity wells, where normal physical laws apply. There are sixteen characters, spread between each gravity source. The apparent confusion of the lithograph print comes from the fact that the three gravity sources are depicted in the same space.

The structure has three stairways, and each stairway can be used by people who belong to two different gravitational sources. This creates interesting phenomena, such as in the top stairway, where two inhabitants use the same stairway in the same direction and on the same side, but each using a different face of each step; thus, one descends the stairway as the other climbs it, even while moving in the same direction nearly side-by-side. In the other stairways, inhabitants are depicted as climbing the stairways upside-down, but based on their own gravity source, they are climbing normally. The Bal-Lue Bolivar Ba-Lues-Are.

Listening to his music again, and again. I find myself drawing a new chronological line, which stretches from Bunk (Johnson) to (Thelonious) Monk and back. I do not plan this poem. It just happens:

The crickets rubbing their hindquarters
The piano is percussion
Heartbeat to fingertip crashing
Cascading note after note… after
Head throbbing note… It’s heavy… sweet and lovely
Black licks from New York New York
To Basin Street… and before that
Perhaps Nigeria to North Carolina
Monk’s ebony and ivory… ascending… descending
Mice pursing their lips in the dark
A dog is not amused… Not amused at all
A stray cat, recently jilted, with the blues
Night wind, restless from lack of sleep
Bopping at Minton’s… It’s like rapid eye movements
Hungry as hell… Well you needn’t come
Do nothing… stand and watch
The fat cloud slipping past the lazy moon
Kitchen sink and faucet in terminal debate
White silk sheets revolting against black… love makers
TV left on when there’s nothing to report… but hate
Arterial scissors clipping the umbilicus… to Africa
Wail of Buddy’s horn in Basin Street
Bunk playing and jiving… He’s jitterbugging… man
On a badly tuned upright… One hot steamy night
Thelonious Monk and Bunk… One fat lick
‘Round midnight. So we shall be traversing
Continents until we are finally free
Back to Africa… Garden of the soul
Back to Africa… Back
Sand slipping away as the tide goes out
Every leaf on every tree dancing in the wind
Topsoil and saplings lost to earth… Forever.
Armies of ants furiously shoring up for winter
Fish are swimming upstream to mate vigorously
Ducks coming out of hiding… only to die
The sun’s cracking open the sky at dawn
But the same shit’s going down
So back to Africa… Back to the Garden of the Soul
Back to Africa … From Bunk to Monk back now!