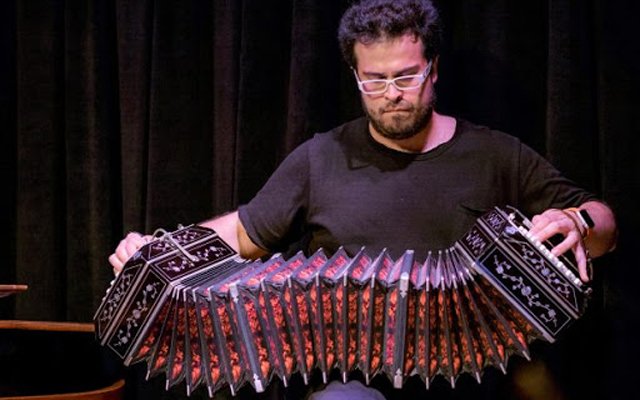 Note: This feature and review was first published in September 2018.

Tracking JP Jofre is a challenge, these days. He and his extraordinary gift as a composer and performer is much in demand. Much of this has to do with the fact that he plays an instrument that is now, more than ever, in great demand. We’re talking about the bandoneón, an instrument almost exclusively associated with Argentina, where the tango is almost de rigueur in any social gathering. The instrument and the music of the tango is to Argentina what the accordion and its music is to Galicia and the guitar and Flamenco is to Spain.

And so, Mr Jofre is elusive not because he is difficult and fussy artist, but because he is so much in demand these days that he never seems to be in pone place long enough to do much more than give a singular performance of his extraordinary music. So it also was how I came to catch up with him under such unusual circumstances. He was, after all in South Korea, while I was rooted to my small town – Milton, near the Niagara Escarpment of Ontario, Canada. He was beginning his day and I was ending mine. Perhaps he was en route to some other city where he would, no doubt, dazzle the cognoscenti with the music of tango played in inimitable style on his beloved bandoneón.

JP Jofre has been doing just that: dazzling audiences worldwide with his virtuosity on the bandoneón. He makes it all look so easy; just like other maestros who came before him. In reality the innocent-looking instrument invented by Henrich Band in 1860, in Germany to play in (organ-less) churches while still giving the impression of the wheezing of the organ was adopted in Argentina for funeral processions and – later – for lively dances, usually performed in bordellos in Buenos Aires. The “Band-Union”, as it was called when its players combined Band’s name and the name of his company. It soon became the bandoneón in that country and first in the hands of Eduardo Arólas, an early pioneer of the instrument and with Vicente Greco it became standard fare through his Orquesta Típica Criolla, where not one, but two musicians were featured on it.

So JP Jofre has a long list of great musicians to live up to, the last and arguably most famous of whom is Astor Piazzolla, who is credited for changing the course of the Argentinean tango forever with his Nuevo Tango. Mr Jofre not only lives up to the tradition, but has already been making a name for himself by taking great leaps in the realm of Argentinean music and taking it to great heights all over the world. Juan Pablo Jofre began playing percussion and guitar at the age of 14 and later attended the Escuela de Musica de la Universidad Nacional de San Juan, Argentina, where he studied, drums, guitar, piano, voice, and composition, before deciding to dedicate himself to the bandoneón.

Today, while just 35 years old Mr Jofre has distinguished himself while playing with some of the most celebrated musicians around the world. He has shared the stage and the studio with luminaries such as Paquito D’Rivera, Kathryn Stott, Symphony Silicon Valley, Santa Rosa Symphony Orchestra, Orquesta Sinfónica Nacional de Argentina, San Antonio Symphony, San Diego Symphony, Philippe Quint, Fernando Otero, and Fred Sturm among others.

It wasn’t so much him finding time to talk to me. I soon found that out. First I would have to track him down. His Publicist Diane Blackman, President of BR Public Relations did that for me. Miss Blackman called me last week to say that he was in South Korea and he would be willing to talk to me the next day. I couldn’t wait. So with day and time of our meeting arranged, I gave his latest recording a whirl and went to bed. Tomorrow I would have to find out what went down at his performance in Seoul, South Korea later. For now, I was eager to know more about his new work – one that he had recently premiered in the US.