The trumpeter Jason Palmer’s epic 2-disc programme The Concert brings to life legendary paintings that have disappeared from the museum that housed them for display; stolen by diabolical means, never to be seen again. In a sense they are about paintings that are “no longer there”. But what’s even more remarkable about the recording may be the utterly romantic and poetic conceit of this album and that may be explained in a somewhat analogous quote from Vincent van Gogh about Rembrandt: “Rembrandt goes so deep into the mysterious that he says things for which there are no words in any language. It is with justice that they call Rembrandt—magician—that’s no easy occupation.” Now why would this be both analogous and significant? 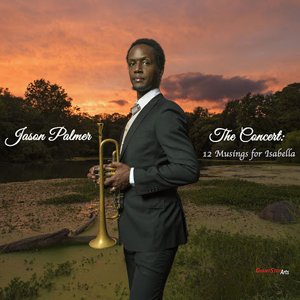 The answer lies first of all in the fact that Mr Palmer’s music sings of the power and beauty of the paintings that no longer visible to look at and to fall prey to their charms. The second and more significant reason is that in Mr Palmer’s hands – and at his lips – it sings with the kind of haunting eloquence that makes the heart break and the spirits soar. It seems that just as Rembrandt used the brush and colour to bring life – as it were – to life, Mr Palmer uses the sound of music to conjure them back to life again – and even more magically so via black dots (and in at least one case, just the black keys) that fly off the page to bring the vanished Rembrandts, Degas, Monet and Veneer back to life again.

As a Black American, Mr Palmer is in a unique position to approach an artistic response to approach any kind of loss including – in this case – the loss of several priceless paintings. He is able to revert to the unique language of African American art: The Blues. The Blues – the special invention of Black Americans informs everything from spiritual and secular, in music, poetry, painting and dance. “Loss” in the expression of a Black American – even several generations after the advent of the slave-ship – is still almost always both natural as well as preternatural because it comes from such a deep place. It is also the reason why even when playing admittedly “European” instruments and the drum-set, which was a Black American invention) such a non-European sound of art as a “Blue Note” came to be… and indeed The Blues and Jazz and the Sorrow Songs of W.E.B. Dubois themselves came to be.

Mr Palmer is a master of this art – his art – and you hear this right out of the gates. As his “Pictures at an Exhibition” begins with “A Lady and Gentleman in Black”. The painting’s sombre grandeur has been relocated here to a composition written on, as Mr Palmer tells us, “the black notes of the piano”. This is both telling and exciting from the ethnomusicological point of view as what Mr Palmer has, in fact done, is relocated this piece to a “Sorrow Song” (what is commonly referred to by white America as the “Negro Spiritual”). But Mr Palmer also brings something wholly new to his song of “the black notes”. He literally jazzes it up; funkifies it making the majesty of a sacred form at once funkily secular as well.

Appropriately enough the music is whipped off the page with extraordinary energy and speed as if the black dots were leaping off the page. This is a profoundly beautiful and telling opening to the show in which impressions of missing art are relocated from their empty frames and their Golden Age of Dutch, Netherlandish style or French pre-post-Impressionist style to the language of Jazz with a force that is viscerally energetic and breathlessly exciting. For instance the mystic grandeur of Rembrandt’s “Christ in the Storm on the Lake of Galilee” painted in his vivid Netherlandish style, is musically interpreted with the harmonic and polyrhythmic freedom of modern Jazz. The fifteen figures in the painting become the time signature of 15/8 – the quarter note giving us a sense that we are in the eye of that storm as dotted values of up to 15/64 become completely evocative of the storm itself.

Still it isn’t just the intellectual capacity of the artist that we find ourselves admiring to the extent of breathlessness. There is sonic emotion here as Mr Palmer as well as the incomparable saxophonist Mark Turner, the brilliant vibraphonist Joel Ross, drummer Kendrick Scott – a master of his instrument – and bassist Edward Perez who is also well-schooled in the wily entrapments of Jazz… all of whom negotiate Mr Palmer’s epic compositional endeavour, seeming to have interiorised every evocative phrase. Especially memorable is the way in which Mr Turner helps traverses the long inventions of Govert Flinck’s “Landscape with an Obelisk”, or how Mr Ross – with the undulant tintinnabulation of his instrument – sculpts the sensuous curves of Johannes Vemeer’s “The Concert” and Edgar Degas’ “The Jockey”.

Best of all is the fact that this music is performed live and it is here that both the beauty of the art and the urgency of the loss of the artworks are made complete in the controlled fury of Kendrick Scott’s drumming (dig his perfprmance on “Landscape with an Obelisk”), and in the rumbling protestations of Mr Perez’s bass. His (Mr. Perez’s) notes on his solo on “Self Portrait” will tell you why he is on this date. The glue in all of this comes from the music of Jason Palmer, represented here by arrangements of extraordinary and sensuous beauty, which he, above all else, plays with lips pressed to mouthpiece (of his trumpet) in perfectly poised embouchure that impels the hot breath through the valves and flared bell of his horn in what must certainly be one of the most distinctive voices of the trumpet. All of this – together with the warmth of the recording – makes this musical experience utterly unforgettable.