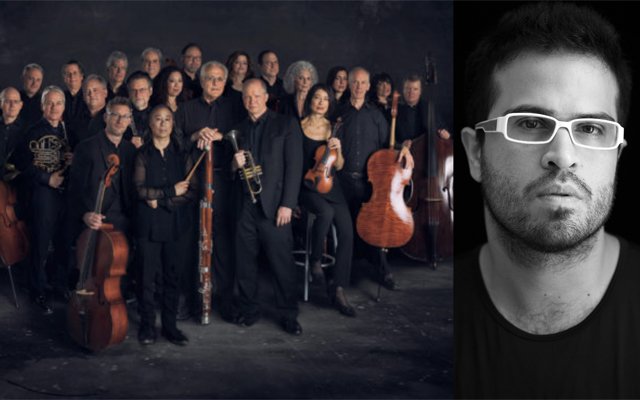 This was Mr Jofre’s Double Concerto for Violin and Bandoneón, a work using the tango as a source of inspiration and the basis for a chamber work that featured celebrated violinist Michael Guttman sharing the stage with Mr Jofre as well as conducting the world-renowned Orpheus Chamber Orchestra, a standard-bearer of innovation and artistic excellence. If Mr Jofre was in a hurry to catch a flight I will never know. He seemed to have all the time in the world for my questions.

Here’s some of our conversation from August 2018:

Jazz Da Gama: Good morning Mr Jofre. Thanks for taking the time to talk to me. Congratulations on the performance last night. (He responds before I can ask my question. Clearly the performance refreshed him).

JP Jofre: Ah… Thanks Raul… I should say Good evening to you… It must be evening where you are, no…? Thanks for talking with me, though…

JDG: Tell me something about the latest recording you just released – your Double Concerto for Violin and Bandoneón.

JPJ: Sure! I began to think about it after a performance I gave with Michael (Guttman) in 2015. I was invited to perform with him while he was on tour with the Dallas Symphony and the Napa Symphony. We connected right from the first time we played music. After that Michael invited me to play with him again, of course… But when we played together again with my Quintet … after that performance at the Museum of Metropolitan Art. He was really excited with what we did that evening. He said to me, “JP I really loved that! I wanna commission you to write a piece that I can perform with you… together…” You know… that’s how this Double Concerto for Violin and Bandoneón was born.

JDG: So that’s how it began? What happened next?

JPJ: Well I got busy as soon as I could, of course. I was really excited with what we did so I wanted to do something bigger… something with a larger ensemble. But I knew that I was also inspired by our beloved tango. So I had a vision to bring tango and orchestral music together. I began writing the first movement of the piece as soon as Michael left New York City for Brussels.

JDG: How long did it take you to finish the work?

JDG: It must have been an intense experience. What do you remember most about it?

JPJ: Oh yes, it was intense. Once I started I couldn’t do very much except write and practice… write and practice. The orchestration was the biggest challenge. You know traditionally tango is played in much smaller ensembles. Even after maestro Astor Piazzolla re-invented the form and created the now-famous nuevo tango it was still in smaller ensembles. But Michael’s challenge to me was to write for a chamber ensemble… fifteen or more players, you know… This is going to be very different, I thought. How do I make the form fit the staging, I asked myself?

You know also traditionally tango is also the music of salons. Even after the great masters of tango – (Arólas, Gardél, Puglíese, Varéla, Tróilo) – and after they and their big orchestras came and went, and after maestro Piazzolla reinvented it with his Nuevo Tango group. Its heat and passion is best experienced in a smaller ensemble violin, guitar and flute, or bandoneon, guitar and another instrument. Now there are many fantastic tango-jazz groups like Pablo Zeigler’s and Pablo Giraudo’s and so on… Our tradition is as alive as it was, with a new shine on it…

My idea was – and this was what Michael also had in mind – was a larger chamber ensemble. So I worked myself like a crazy guy… I wanted this to be the best thing I have done…

JDG: As you know, this is probably your best work… It’s an important one certainly. How do you think it was received?

JPJ: How was it received? Well, I think people like it… at least that’s what I hear from the reviews I read. For me, the greatest joy…apart from being asked by such a great musician as Michael to write it… was recording it and performing it. You know the Orpheus Chamber Orchestra is a great ensemble. They played it like… I don’t know… as if they were Argentinean, you know… native peoples…