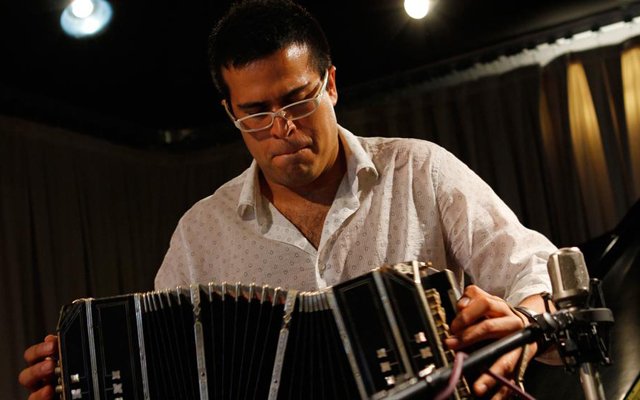 The tango is not easy to play… you know there is so much history and culture that is difficult to get into unless you are Argentinean… The tango is a form requiring extreme emotion. It’s something you have to be born into… And I always thought that you can’t learn it, But you know what, the Orpheus Chamber Orchestra and Michael… they played like Argentineans!
We recorded this at Sear Sound… a great studio with two terrific engineers… Chris Allen and Daniel Freiberg… The Orpheus Chamber Orchestra is definitely one of the best in the world… And Michael… he’s just the greatest… He makes all the music come alive… and the orchestra of course… Yes, I am thrilled with the results. 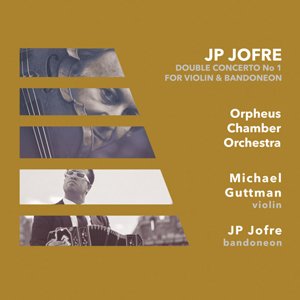 JP Jofre: Double Concerto No. 1 for Violin and Bandoneón Every tango tells a story. Stories are familiar – or at least they’ve become famously so after the great Argentinean Jorge Luis Borges the tango became glorified forever in his own stories such as A Man from the Slums (from Borges, A Reader Dutton, 1981). But the stories told in tango are a lot older. They go back to the late 19th century when Eduardo Arólas started to write music inspired by knife-wielding compadrítos, womanising thugs who made a living off the beautiful minas who they pimped with in their bordellos. The tango began, it seemed to tell of their lives in dances that marked the conflict between male dancers over the women they ran. Each dance, a fight of the immigrants who patronised the women for territory as well a place in the women’s body, mind and spirit.

From the bordellos to the silver screen and then to clubs and finally from dance halls to the concert stage, the tango has grown both in legend and popularity with some of its greatest exponents – from Juan D’Arienzo to Osváldo Puglíese, Hector Varéla and Anibal Tróilo to the great Astor Piazzolla, who came to modernise it and take the music and dance to the concert stage with his legendary Nuevo Tango ensemble.

JP Jofre’s contribution is unique among everything that has come out of modern Argentina. His work is one of the most complete orchestral works ever written in the tango idiom. Admittedly numerous tangos have made their way into the modern cannon – from Piazzolla’s pioneering ones to tangos by Paquito D’Rivera, Pablo Zeigler, Pedro Giraudo, and others. And while these have garnered attention – even numerous awards – Mr Jofre’s is unique among all of this material because it sweeps across a continents of styles into the realm of classical concert works and yet retains the full-blooded essence of the Argentinean tango. It joins Mr Piazzolla’s recordings with the Orchestra of St. Luke’s conducted by Lalo Schifrin and his works with the Kronos Quartet, as one of the most important new works for bandoneón and chamber orchestra by an Argentinean.

This commission – by the celebrated violinist Michael Guttman – is captured forever on a superb recording made by Mr Jofre, with Mr Guttman playing the violin parts as well as conducting the Orpheus Chamber Orchestra. Mr Jofre is, of course, brilliantly audacious. He turns the tango inside out and upside down playing unexpected chords and bringing to the music a sense of openness as well as dissonance. His music is filled with the traditional dislocation of immigrant porteño who dreams of a new life. Mr Jofre’s music captures all of this romantic longing while transmuting these deep and raw emotions onto a personal plane of betrayal and triangular relationships experienced through its imaginary characters – the dancers – and himself.

Mr Jofre’s genius comes from the fact that, within the many layers of the story and the changing moods and pace of the piece between movements, he never betrays this essence of tango – its sense of fate, its core of hopeless misery, its desperate sense of loss. In the Double Tango for Violin and Bandoneón passion and sensuality come together – with him and Mr Guttman’s violin seemingly walking side-by-side – and they walk (or dance) with sadness, but emotions, often drawn out to a level of almost unbearable intensity. Together with the superb musicians of the Orpheus Chamber Orchestra this intensity is suddenly subsumed in a menacing, larger disquieting sense of inevitability. The members of the Hard Tango Ensemble – both pianist Pablo Cafici as well as Mariana Ramirez – contribute sterling performances.

This atmospheric classic – from its effervescent allegro in Movement I to its breathtaking finale; the milónga, quintessential song of the Argentinean guacho – is also accompanied by three shorter works. Each introverted miniature is a perfect infusion of the conventional form of the tango, now recoloured with an intimacy and an emotional intensity. Together with his magnum opus – the “Double Concerto for Violin and Bandoneón” these works can only be described as the poetry of feeling.