Where does reality begin? Is it at the edge of the slender rift between myth and verity? It’s a question that might well have baffled and certainly occupied philosophers and archeologists for centuries. Fortunately the artist has never felt the need to occupy him or herself with such a conundrum. Happily so because it is both myth and verity that has enabled poets and painters, musicians and dancers to feed hungrily off both. This duo album of songs by the virtuoso woodwinds specialist Mulo Francel and the inimitable pianist Chris Gall dives into what seems to be a realm into which both myth and verity are conjoined. Mythos is the result. 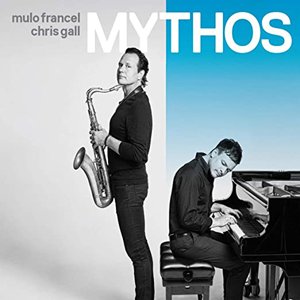 Fortuitously artists such as Mr Francel and Mr Gall occupy that part of the universe where the sound and silence of voices raised to the heavens, from whenec life and the imagination… indeed, everything came. And their music certainly evokes this yearning quest. The repertoire all seems perfectly selected to fit the quest. Music inspired by Greek and Roman mythology – with “Palinuro” inspired by Virgil’s Aeneid, after Palinurus the drunken helmsman of Aeneas’ ship and “Dido’s Lament” from Henry Purcell’s opera, Dido And Aeneas (also inspired by Virgil’s epic) and “Ikarus’ Dream” based on the Greek myth related to the flight of Icarus and Daedalus and their vaunted but ill-fated quest to reach the heart of the sun.

The repertoire also delves into Johann Sebastian Bach’s own sacred music with a superb interpretation of “Jesu Beilbet Meine Freude” (“Jesu, Joy of Man’s Desiring”), a chorale setting of his cantata Herz und Mund und Tat und Leben, BWV 147 (“Heart and Mouth and Deed and Life”). And from the fluttering imagery of heaven the musicians descend into hell to grapple with “Sketches off Styx”, and its densely woven piano and saxophone lines mimicking the viscosity of the river thick with eternal pain on which Mr Francel uses the contrabass clarinet to evoke the ink-dark imagery of a spiritual realm of evil and suffering, often traditionally depicted as a place of perpetual fire beneath the earth where the wicked are punished after death.

Meditation is at the centre of this duo recording and the musicians do not only find themselves contemplating spiritual or mythological aspects of the heavenly realm, but also music that evokes the myth and legends of earthly dominions as well. Thus we find ourselves listening to the invocation of “Yorke’s Guitar” at the top of this recording, and through it to “Die 7 Weisen”, an original interpretation of the Seven Sages of Greece or (as interpreted in Germany) Sieben Weise von Griechenland. In the musicians’ interpretation, of course, the seven wise folk are four women and three men in a song where the question “what if…” is posed in wonder and with exquisite airiness.

The recording could not, it appears, be complete without interpreting stand repertoire and Mr Francel and Mr Gall do just that but with such eloquence and minimalistic ornamentation that we are left entranced as if by myth and legend. Songs such as Antonio Carlos Jobim’s “Wave”, Brooks Bowman’s “East of the Sun” and in the record’s most exquisite finale, “Willard Robinson and Dedette Lee Hill’s “Old Folks”, a song that leaves us breathless for more. Perhaps this too will come just as surely and as magnificently as Mythos did. The musicians did, after all, remind us that this was only a “Reality Check” early on in the passage of this music – the absolute enjoyment of all of which is made that much more memorable through the close-miking warmth of Adrian von Ripka’s recording.