One of the most important characteristics of what you may consider “great song” is that it captures – often in an almost secretive way – unutterable state of the human mind. At its evocative best, such music is evocative of sadness and joy, doubt and hope, loss and triumph, However, it takes a very special kind of musician to make the human experience come alive in three, four or five minutes. Fin de siècle music, [which for jazz would mean the turn of the 20th century, of course] composed by Louis Armstrong and [early] Duke Ellington offers the kind of beacon that has lit the way for generations of artists to follow – and thus the “standard” was born.

Playing that music today thus takes a very special skill and sensitivity, which is something most young musicians lack for a multiplicity of reasons. Fortunately for us, there are a few exceptions to that and one of the prime examples is the vibraphonist Simon Moullier. He proved that with his stunning debut recording Spirit Song and he solidifies his inimitable reputation as an artist once again with 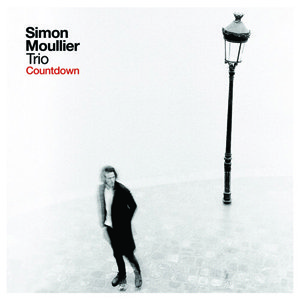 his sophomore, trio recording Countdown, a collection of ten songs, often characterised as modern-day “standards” from the Great American Songbook.

The key for this trio, it seems, is a “three musketeers + 1” kind of relationship between composer and trio intoxicated by the profusion of opportunities for each musician to entertain themselves and elevate their [individual and collective] dialogues which goes on for the eternity of the entire three or four or five minutes of each piece. As expected Mr Moullier stands head and shoulders above any and all vibraphonists playing today. In each of the ten outings here he adds singular touches of phrasing and colour – always applied with great virtuosity and derring-do. He is, I believe, at the peak of his riveting and expressive powers on Cole Porter’s “I Concentrate on You”, which he plays with sinewy as well as uncommon tenderness.

Both, bassist Luca Alemanno and drummer Jungkuk Kim, are perfect soul-mates, completely attuned to the leader’s artistic vision. Each of the arrangements is interpreted with idiomatic grace. But when called to do so both bassist and drummer play at being skydiving rivals floating above the music’s iconic episodes with roguish attitude and style. As a result these well-known standard songs soar to thrilling heights, ascending to the rarefied realm of truly memorable artistry. into artistry and each musician plays at being