Channeling the spirit of the ancestors is one of the most poignant aspects of the music of Roberto Magris. His vast repertoire speaks volumes of this. But nowhere has this masterful aspect of his pianism more poignant – and daring – than on Shuffling Ivories. The album has been produced by longtime musical guardian angel Paul Collins. What makes it so special this time around is that the music is made in the quietude of a duo with a bassist who deserves infinitely greater recognition than he is given; and that bassist is the incomparable Eric Hochberg. 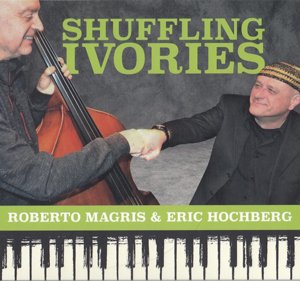 Choice of repertoire is everything when laying down an album and Mr Magris never fails to thrill in this department. Moreover his performance on Shuffling Ivories is ever more memorable because of the reverential treatment of classic material, from the nervy pens of the great ones – Eubie Blake, Cal Massey, Andrew Hill and the relatively little known Billy Gault. The result is that in an hour or so of music Mr Magris gives us a master class in the historic works of some of the greatest Jazz writers. It’s the kind of thing few pianists would dare to do for fear of sounding imitative. But Mr Magris has the skill and highly original voice to be skillfully true to the work of masters and always sound just as true to “himself”. In this respect he is much like the great Dick Hyman.

Mr Magris could easily have made this recording himself. It is the kind of production that easily qualifies as “a pianist’s piano recording”. But the pianist goes one better by re-creating this music in the lush intimacy of a duo setting with no less a musician than Mr Hochberg. His choice of bassist is inspired. Mr Hochberg brings the smoky voice of his contrabass on which he “sings” – and that too with a voice that sounds like the swishing and rustling of raw silk brushing on skin. Whether he is playing pizzicato or con arco, his articulation is expressive and majestic and he takes but a few bars of soloing [or playing in duet] to establish that he is an artist of the first order. His masterful con arco playing first on Mr Magris’ “Clef Club Jump” and then on Massey’s “Quiet Dawn”. And the masterful and evocative improvised solo following on from Mr Magris’ introduction, on Eubie Blake’s “Memories of You”, will live in the memory for a very long time expressly because of the level of invention and deeply-felt emotion.

There are also three original compositions – “Shuffling Ivories”, “Clef Club Jump” and “Italy” – by Mr Magris. The songs are exquisite ripostes to the masters. The first of his compositions not only declares his passion and fascination for the great instrument, but does so with almost insolent virtuosity. Another aspect of Mr Magris’ pianism – one that sets him apart from almost every other pianist playing today – is that his playing comes straight from the heart and rarely [if at all] puts his own dexterity above the cause of the music. His melodic inventions are full of parabolic surprises; his ability to conceive harmonisation that you may never have heard before. The creative fire of “Clef Club Jump”, and the tender-hearted and elegiac turn of “Laverne are startling examples. Moreover, Mr Magris’ his rhythmic abilities are flawless throughout. Best of all he turns the melodies of everything he touches into a poetic miniature and this is why Mr Magris’ music is a joy to behold, especially – and poignantly so – on the repertoire of Shuffling Ivories.