His back arched over the glistening keys of his vibraphone, lost in a world of craftsmanship and invention the prodigiously-gifted Simon Moullier leans into his darkly beautiful, meditative music. Himself wraith-like and playful like the characters of the spirit-world that have inspired his songs, Mr Moullier seems agape at the immensity of the interior landscape of his world. Likewise, he brings brilliant reflections of the glorious mysteries of that wondrous world to the melodies, harmonies and rhythms of his songs on this breathtaking debut recording Spirit Song. 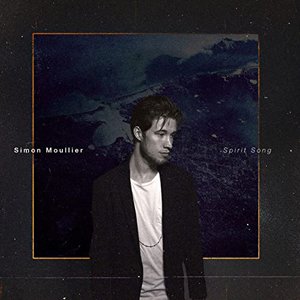 If there were any nerves about making this music, you would never know. These are nine perfectly-crafted works of music – eight originals and one of the most memorable versions of Gene De Paul’s classic, “I’ll Remember April”, a version Mr Moullier plays seemingly with the nerve-endings of his fingers, especially in the second pass of the songs when he surprises us with the heart-stopping moment he abruptly bends the end of the fourth phrase of the chorus, that will surely bring the listener to tears. There is no perfect time for a debut; you get down to the business of declaring your intent as an artist to the world when you feel you are ready. But judging from these songs, it would appear that Mr Moullier has been ready for a long time. He seems to have been inhabiting this spirit-world all the while meditating and writing music and ready to emerge from it seemingly with a Yoda-like maturity.

Mr Moullier is a marvellous mallet percussionist who wields his soft-headed hammers with joyful ingenuity. He has clearly listened deeply to the great instrumentalists who came before him: Milt Jackson, Bobby Hutcherson, Red Norvo; and the great composers such as Claude Debussy and Maurice Ravel too. His touch is even and light. He uses his considerable technique beautifully; his arpeggios, which whip and curl, combine logic and continuity with magic; his double-time dashes are parenthetical and light up what they interrupt; his long single-note passages continually pause and breathe; no tempo rattles the clarity of his articulation, which has a private, singing quality. While all of this marks his every song, you never know when he will produce those surprises, whether playing the vibraphone or balafon gloriously enhanced by subtle electronics.

Add to that the fact that Mr Moullier is adventuresome; an oblique instrumentalist. This, of course, stems from the eccentricity and daring of his own compositions. Pick any song here – the sacred “Spirit Song”, wispy and ghostly “Wind Chaser” and, of course the pneumatic “Beings of Light” – and you will surely be entranced by the brilliance of his playing as he starts these numbers with the inside-out phrases of gorgeous melodies that bang the heads of his harmonies with driving rhythm. The slow, balladic “Beings of Light” and the elegiac “Kenyalang” are singular with harmony and rhythm tapping at the hull of melody; testing its soundness, cheering its beauty continually.

Along for the ride, on this recording, are musicians who have deeply interiorised Mr Moullier’s work and his artistic conception. Each is a brilliant musician in their own right; some, like Dayna Stephens, are already well-known; others such as Morgan Guerin, Simon Chivallon, Isaac Wilson, Luca Alemanno and [especially] Jongkuk Kim certainly ought to be better-known than they already are. Together they share in the ingenuity of this music, contributing immensely to this debut album to die for.