In a rather disparaging comment about Switzerland, Orson Wells once said that the only thing that the country had contributed to world history was the wrist watch. Wells was not known for hyperbole but then he was not known to be as discerning about music as he should have been. Not as discerning as Intakt Records or Switzerland’s elder imprint, hatHUT. Too bad he did not live to see these entities rise to eminence today. It is fair to say that Intakt is a boutique label; small in size and the number of releases, perhaps, but big on musical and production quality which is the next best thing to the quality of artistry within Intakt’s portfolio.

Recent releases feature recordings by Tom Rainey with Ingrid Laubrock and Mary Halvorson, Ali Keïta with Jan Galega Brönnimann and Lucas Niggli, Sarah Buechi with Stefan Aeby, André Pousaz and Lionel Friedli, the Ulrich Gumpert Quartett featuring Gumpert, Jurg Wickihalder, Jan Roder and Michael Greiner, Florian Egli with Dave Gisler, Martina Berther and Rico Baumann and the great Pierre Favre together with Chris Jaeger, Markus Lauterburg and Valeria Zangger. This is a masterfully put-together roster with the very finest of European and American artists playing music that reaches inebriating heights. Drunk with this artistry it is not possible to come down to earth especially if you listen to one record after the other, as I did, which reminds me of the time I met Elvin Jones after a long session testing Zidjian cymbals. A head full of sound is putting it mildly. And yet, I cannot think of a better or easier way to choke myself with gold. Not now; not ever… 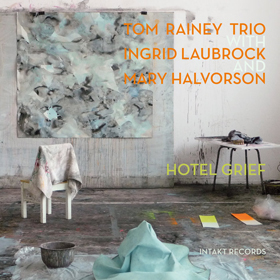 This masterful, angular music finds these three sympathetic artists at the top of their game. Collectively composed, this music is a rather more indulgent affair than much music created for woodwinds, guitar and drums – what a brave combination. Between composition and improvisation, not only does it require carefully handling if its seductive charms and myriad intricacies are to be fully appreciated, the extended improvisatory finale can be tricky to hold together. I’ve been able to wax lyrical about classy fretwork of Mary Halvorson who bends and twists notes almost at will, and the unflappable soaring of Laubrock’s saxophones, but only recently have I experienced the mind expanding percussion colourings of Tom Rainey. Is this trio recording possibly one of the finest yet? I am inclined to think so. After a sultry and intoxicatingly poised opening (‘Last Overture’) the central section of the performance fairly crackles with wit and ear-prickling detail (how good it is, for instance, to have those harmonic overtones register so subtly in ‘Briefly Lampoc’.

As for the ambitious ‘Mr. K.C (for Keith Copeland’, I don’t think I’ve ever hears it essayed with a greater combination of stylish teamwork, sinewy thrust and inevitability. (Both composed sections and cadenzas, by the way, are riveting). I found myself virtually craving more of the ambient glow that the trio mustered throughout. This is music that is beyond reproach and were I to make up a list of fine recordings, Hotel Grief would virtually soar to the top of the list. 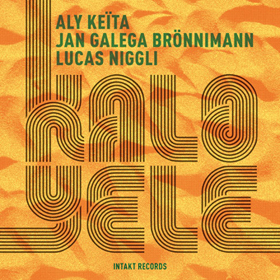 There is a visceral excitement as well as an irresistible elegance to this recording by the masterful kalimba and balafon player Ali Keïta together with Jan Galega Brönnimann a king of the low reeds and the soprano saxophone and the percussion colourist Lucas Niggli. It is all magnificently done: the formidably played instrumental virtuosity and beguiling sophistication. Jan Galega Brönnimann’s restrained, yet expressive performance together with the echoing kalimba and balafon haunts you long after the final notes have died away. It’s a fine repertoire. Full of African rhythms and influences these pieces are youthful in tone, but sophisticated in thought, dance-like and virtuoso. They make immensely pleasurable listening. But more than anything else here is a case of African music seeming to fit hand-in-glove with improvised music. The resultant sound, though, is just eminently natural and nimbly elegant, with Ali Keïta’s graceful, unshowy virtuosity shining through bold and strong. Each of the pieces – all culled either from African folkloric realms or composed by the Europeans. They are also studies in instrumental mastery and empathetic relationships between the three musicians.

The result is a cross-cultural musical edifice that is born of verve and dazzling technique as well as music that provides a sense of a larger ensemble than the mere three musicians who actually appear on the disc. There is also a slight elegiac quality even when the music is scurrying towards hug, glistening columns in the composers’ trademark style. Nothing ever disappoints here. 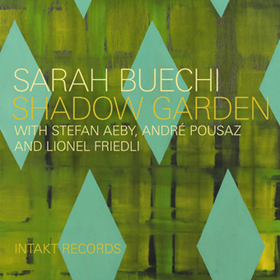 The silken-voiced Sarah Buechi pins her colours to the mast in this memorable performance on Shadow Garden which features music as deliberately mysterious and mystical as the title. This is a fine studio recording that transcends the sterile environment of an acoustically perfect room and balances immaculate musicianship with raw power. Each whisper, hiss and scorching vocalastic twist and turn is immaculately captured and Buechi shows how her by digging deep she is able to establish that the soul is more important than the shape of the body in which it resides. She sounds vulnerable and introverted when she needs to be as in ‘Lost and Found’ and bold and extroverted in her approach to imaginary characters less defined by role-playing than by deep feeling and slow-burning intensity. If there are a few blips – some wavering tone, the odd frayed high note – the quality of the instrument and the singer’s artistry is never in doubt. The accompaniment of Stefan Aeby, André Pousaz and Lionel Friedli is informed by equal poise and concentration and reinforces Sarah Buechi’s minutely graded voice.