Despite copious evidence to the contrary, many technologically advanced humans cling to the belief that they embody the pinnacle of evolutionary biology. Once we accept the possibility that such deadly arrogance is misplaced, we might open ourselves to the living world beyond and beneath us, and learn from far more evolved beings such as trees in their forests, or what survives of them after hundreds of years of human extraction. Fortunately this does not apply to the majority of artists; to artists on the Intakt Records roster, that is. Over the last three decades, few European record labels have chronicled the totality and adventurousness of the avant-garde like Zurich, Switzerland’s Intakt.

Since the company was launched in 1986 by Patrik Landolt, artists from both sides of the Atlantic—Barry Guy, Oliver Lake, Alexander von Schlippenbach, Elliott Sharp, Aki Takase, Cecil Taylor, Die Enttäuschung and others—have enjoyed fruitful relationships with the imprint, which sees itself as something more than a traditional record company, working with its artists over the long term to produce carefully curated editions. Intakt’s catalog now boasts more than 220 releases. “Our ideal is the good editor of books who follows writers and their work over years and stays in an intense discussion about the work,” said Landolt in an interview with DownBeat earlier in September of 2013.

“I’m not interested in running a label which brings out this and that and collects, more or less, interesting recordings. I like to follow, accompany and supervise the artists over years, and hopefully I’m able to support him or her and their music and assist them in developing a musical work and biography.” Fortuitously, Landolt and Intakt seem to have fallen in line with an extraordinary ancient African Proverb: “If you want to go fast, you go alone, if you want to go far, you go together”. Funnily enough the Intakt recording artist has always felt the same way. And it has worked wonders for them, for here is some of what they created together with this iconic record label. 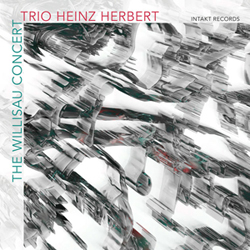 All of the works performed by Trio Heinz Herbert – which comprises Dominic Landolt, Ramon Landolt and Mario Hänni – on their compelling disc inhabit a realm far above the mundane. The music soars on rapid flights and journeys through sonic worlds at once zealous, reflective and transcendent. A somewhat profoundly contemplative thread connects the pieces by members of the group and much of it is wholly new to the ear. The Heinz Herbert seems to have improvised this music on the fly, but it is based on wonderful sketches and patterns. And an exquisite radiance pervades the music. “Granulare Liebe/EL” is a gleaming gem, whetting the appetite for more from these quite remarkable musicians. Heinz Herbert is an exceptional artist, with a shimmering sense of sonority and the ability to find a keen balance between poetry and intensity. A memorable recording all round.