Any attempt at approaching the work of Bill Laswell is fraught with the danger of being seduced into a compelling maze of artistic kinetics. Compelling because is music has an irresistible aura that often lurks in music’s most evanescent state. Mr Laswell’s music seems to echo something that Eric Dolphy once said, “When you hear music, after it’s over, it’s gone in the air. You can never capture it again.” In fact, there are innumerable examples of just this effect; just this experience from listening to Mr Laswell’s music. One that co0mes immediately to mind, and has special significance as far as offering but attempt to unlock a kind of code to his music comes from an album he made entitled Emerald Æther: Shape Shifting (Shanachie, 2000). The record was a remix of music derived from Irish and Irish-American artists from Matt Malloy and Karan Casey to Solas and Cathie Ryan.

That music seemed to be swirling on a miasma of melody, harmony and rhythm seemingly delivered in a droning ululation of fifes and pipes all echoed in bloodbeat of the bodhrans, so much so that one actually experienced the mythical shape-shifting to conjure mythical events such as the Wooing of Etain Fuamnach jealously turns Étaín into a butterfly. The most dramatic example of shapeshifting in Irish myth is that of Tuan mac Cairill, the only survivor of Partholón’s settlement of Ireland. In his centuries long life he became successively a stag, a wild boar, a hawk and finally a salmon prior to being eaten and (as in the Wooing of Étaín) reborn as a human. In all of this, however, Mr Laswell did not play a note; he just remixed the music but the effect was hypnotic.

This leads one to think there is something about Mr Laswell’s ability just to respond to sound – any sound – that suggests that he does so with body, mind and spirit; something just a handful of artists are able to delve into and that too; perhaps once in a lifetime. With Mr Laswell, however, the experience is every time he even approaches music, adding the characteristic bellow and drone of his bass to the music of those he plays with and so much more so when creating original music – something he has been doing much of lately. And it is this that led one to that Socratic proclamation to describe the experience of Bill Laswell’s sound world, a chance occurrence listening to his latest recording with Hideo Yamaki and Dave Douglas Live at the Stone while reading the German philosopher and Josef Pieper’s scholastic translation of Plato’s Divine Madness, a treatise that makes the Case Against Secular Humanism. 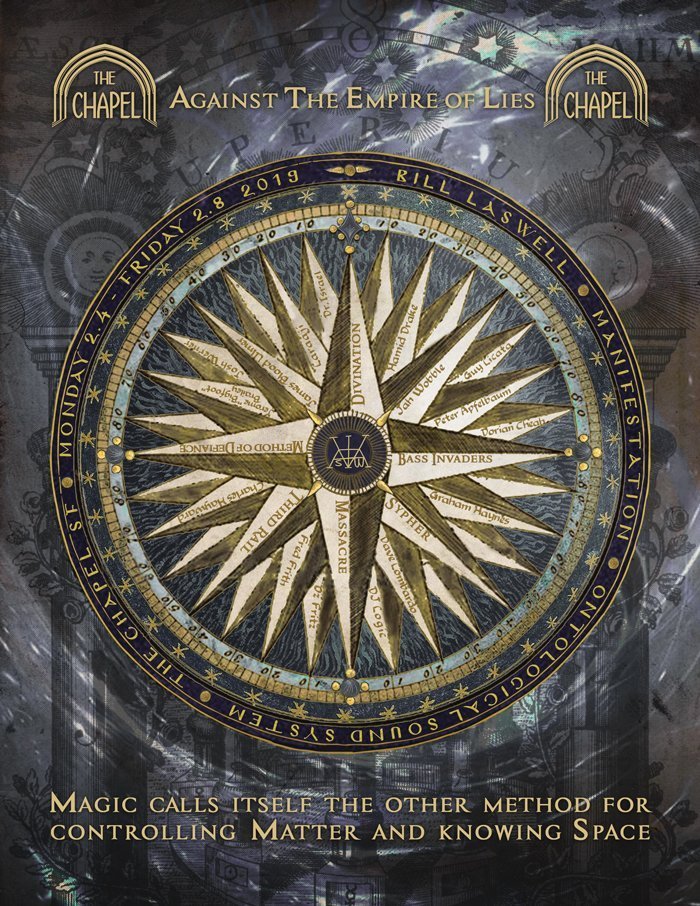 The pamphlet begins with the quote from Plato’s teacher Socrates, which is translated (by Mr Pieper from the Greek, seen above) to read: “The highest goods come to us in the manner of the mania inasmuch as the same is bestowed on us as a divine gift.” It is a complex argument derived from the late Socratic Dialogue Phaedrus. “In this Dialogue,” says Mr Pieper, “Socrates discusses four different forms of the theia mania,” (or “Divine Madness”), “by which he means precisely this god-given state of ‘being-beside-oneself’” In Mr Laswell’s case the ability to inhabit something outside what one might expect to be even within his sphere of experience. Like being able to cohabitate with the Gnawas of Essaouira, or the Jbala Sufi trance musicians – the Master Musicians of Jajouka…or music inspired by the transcendent writings of Paul Bowles, the rap of the fiery, pioneering group of rappers The Last Poets and Olodum, the master drummers from Brasil; the sardonic funk of the Late George Bernard “Bernie” Worrell, Jr., a.k.a “The Wizard of Woo” to the deeply spiritual journeys with Pharoah Sanders, with whom he has numerous collaborations… the list is enormous; too enormous to enumerate here (or anywhere else)…

Suffice it to say that Bill Laswell has, proverbially-speaking, “been there and done that”, wherever “there” is. And yet he remains under-credited and rarely acknowledged for his contribution to music; even vilified… He once wrote in an elegiac goodbye to Sonny Sharrock, whose monumental recording Ask the Ages he produced where he lamented how unappreciative the listening public were about Mr Sharrock’s contribution to the guitar continuum from Jimi Hendrix and after, even as Mr Sharrock was creating one masterpiece record after another towards the end of his life. And he was often misunderstood – even as he gave his all to the revival of The Last Poets – something that has long been forgotten and perhaps even forgiven.

The Magic of “Collision Music”

Mr Laswell seems to have learned lessons early in his career as a professional music about providing access to free expression as well as retaining creative control of the end-product. Of the two aspects he placed greatest importance on providing the artists he has worked with an atmosphere in which to give freely of their art as well as to reach into the deepest parts of their artistic impulses. Following naturally from this was to ensure that the creative product saw the light of day in its pristine creative form. In this regard he has

owed much to his avowed mentor Alan Douglas who revolutionized the United Artists Jazz Division, which he came to run in 1962. Perhaps he may have also inadvertently taking a leaf out of the playbook of men like Frank Sinatra (Reprise). At any rate it led him to Chris Blackwell who, through Island Records and (later) the Palm imprint, helped facilitate the release of much of the material he Mr Laswell produced and recorded giving him complete freedom to decide what happened on his own imprint: his legendary label Axiom. But there were also many other label projects:

(¹ “The highest goods come to us in the manner of the mania inasmuch as the same is bestowed on us as a divine gift.”)