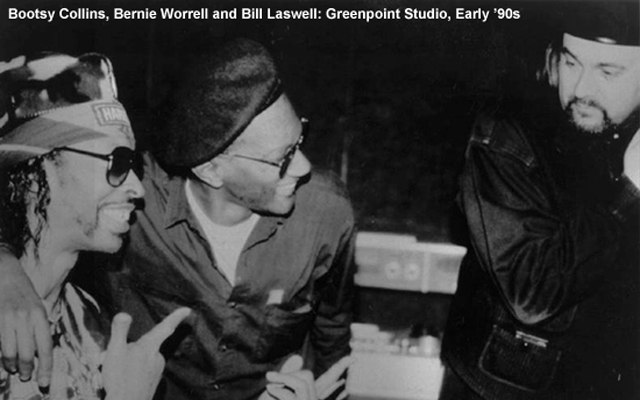 Matching those recordings albeit on a different plane were the sessions that involved Mr Laswell and the ancient and modern worlds of Ethiopia and that dramatic collision is best documented by his work with Ejigayehu Shibabaw, known by her stage name Gigi, which were Illuminated Audio (Mr Laswell’s remix of the 2001 album “Gigi”) and Abyssinia Infinite: Zion Roots, from 2003. But perhaps the most prescient of his projects was the one with Miss Deyhim Madman of God which featured Miss Deyhim’s ingenious musical interpretations based on the poetry of the Persian Sufi-saints. There was also the other (Persian) project Hashisheen: The End of Law, a feature on the notorious sect of Persian assassins and which featured narration by Miss Deyhim, Hakim Bey, William Burroughs, Genesis P-Orrige, Umar Bin Hassan, Iggy Pop, Patti Smith among others.

It is those Morocco-inspired recordings together with the Sacred System series and his projects featuring the seamless continuum of music from Ethiopia and Persia that are among his most significant work. For it is these recordings also best reflect the Divine Madness that pierces the soul of his own music that he has done through his own bands such as Last Exit, and the myriad recent projects that bear his name including those with Dave Douglas, Peter Apfelbaum, Jah Wobble, Hideo Yamaki, Toshinori Kondo and Hassan Hakhmoun, and the new series of (forthcoming) Ontological Sound System performances with the British bassist Jah Wobble, and others (more about this later).

The Madman of God

The raw and visceral music of Bill Laswell often sounds as if it has been sprung into being from a point before and beyond the modern world, evoking elemental human or natural forces, whether the stylised violence once associated with Greek Tragedy, the elemental cycles of the natural world or the destructive march of time itself. This is wholly in keeping with a almost spiritual artistic vision; one that puts him completely in the continuum of the cosmic sound-world. Much of his music – especially with Last Exit and in the many collaborations he has had with Jah Wobble, Bootsy Collins, Sultan Khan and lately with Hideo Yamaki, Dave Douglas possess the massive, rough-hewn quality of a prehistoric monument, though as his career has progressed he has also shown an increasing ability to produce music of spare lyrical beauty and, on occasion, haunting delicacy.

The same may be said of his musicianship as a bassist. At a time when the world became besotted with emulating the harmonic conceptions of Jaco Pastorius, whose chord progressions and virtuoso leaps in single notes and arpeggios, monumental dyads, triads, triplets and impossible glissandos captivated the world Mr Laswell has ploughed a singular almost lonely farrow. His playing has conjured the thunderous cosmic growl that is evocative of the groaning revolution of the earth itself and springs from the rhythmic gravitas of the bass while guiding his instrument into its oldest role in music: to hold up the majesty of the bottom end of melody and harmony. The gruff, sometimes even violent imagery of his work magically lifts the voices of other instruments in his ensemble; the shrieking trumpet and the wailing guitar, for instance, which he props up with often intense but muted lyricism, which has a lasting impact on any music that he performs.

His works are imaginary landscapes where – like another early influence, Brion Gysin – he prescribes that “nothing is true, everything is permitted”. So vast is the sound-world that it seems to cover the very cosmos itself – from Africa, Europe and America to India and the East and way beyond. Here he always works within music’s continuum. His works are also completely devoid of both the “geographical” and “chronological” aspects of time. Instead they inhabit a hauntingly somber lyricism, powerfully muted for most of their length, but rising at their epicenter, to a vast and shattering climax. On paper this makes his music sound impenetrable, but the performances are always crystal clear while they possess a mighty heft as they carry a powerful physical weight that transcends narrative clarity.

Celebrations of All Things Laswell

Everything almost came to a grinding half a few months ago when due to failing health and lack of funding to produce and release the enormous amount of music he had already recorded as well as work on new projects. A call went out to help Mr Laswell recover from both and save his beloved Orange Music Studio in New Jersey. Happily, all is now well enough for Mr Laswell to undertake a four-day Residency at The Chapel in San Francisco, California from Monday February 4 to Friday February 8 with a slew of musicians who have played with him – some for decades – including Laraaji, Hamid Drake, Peter Apfelbaum, James Blood Ulmer, Graham Haynes, Jerome “Bigfoot” Brailey, Josh Werner and the indomitable Jah Wobble. This will be followed by a performance with the great Anthony Braxton and Dave Douglas at the Théâtre de Cachan, Cachan, France on February 19. 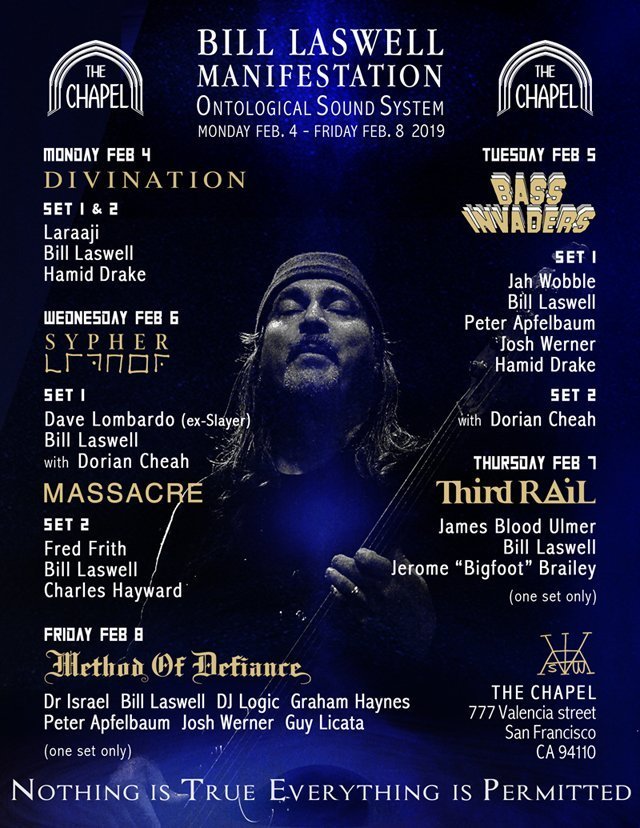 Meanwhile the year 2019 is young and there is every likelihood that having steadied the ship, so to speak, Mr Laswell will continue on an extended European swing returning to the US for a night at the Stone on March 27 for a concert with Peter Apfelbaum, Brandon Seabrook and Aaron Johnston. And then on to the Far East… everywhere it’s likely that the cosmic forces will be in alignment once again for the earth to dance with the “collision music” of Bill Laswell and friends where great layers – or “strata” – of sound made by his bass and other instruments, whose shifting relationships will evoke the massive natural forces that shape the planet. These strata will sometimes stack up immensely, at other moments in time they will thin, with the most diaphanous textures, to silence. But always there will be a sense of returning to the same point, only to discover that the view from above and below has changed in the interim. On top of these seismic musical processes Bill Laswell will have created a veritable, virtuoso musical superstructure whose riotous details suggest the teeming surface life of the Earth in all its protean glory.

Everything Laswell at Bandcamp

Oz Fritz, a legendary sound engineer and often Mr Laswell’s “man of the hour” especially on live and such field recordings as the iconic (Laswell production) The Trance of Seven Colours often writes about Mr Laswell. His writings can be found on his Blog.

Notes and Acknowledgements: Many thanks to Antje Hubner for the connection and Yoko Yamabe for inputs. Most of all thanks to Bill Laswell for being so generous with his time and, of course, to Mïchael Lemesre for a lot more that can be explained here.
It’s also not possible to forget the influence of Alan Douglas in all of our lives. A big “thank you” to you, Alan, wherever in the universe you’re traveling right now…