Dave Liebman:To My Masters
Every musician has some sort of story to tell. Most musicians don’t always tell it very well. When some tell their story one letter is predominant in it and that letter is also the pronoun “I”. If every chapter doesn’t begin with it, then it somehow creeps into quite early and somehow takes over the chapter. Great musicians, however, always see themselves as part of a continuum. And they never see themselves as great. That’s an honour that we confer upon them; something they are usually embarrassed about or certainly don’t quite know how to handle. This is because they see themselves as serving the art they practice, sometimes dominating it, at other times being subjugated by its enormous challenges. No matter what the outcome of the struggle the result is often magical and almost always heartbreakingly honest.

Dave Liebman is one such musician upon the word “great” has been conferred not only by his legion of fans and many appreciative critics and music historians, but also by his peers – and his masters. Although he’d been playing long before he burst upon the scene and captured the imagination of the world with his iconic band Lookout Farm, to many of us he revealed his big heart and soul one day in Japan. The occasion was a concert series called Live Under the Sky. The date was July 26, 1987 and the venue was The Yomori Land Open theatre East. It was a concert to celebrate the music of John Coltrane and he was joined on stage by Wayne Shorter, Richie Beirach, Eddie Gomez and Jack DeJohnette for what was one of the most electrifying tributes to the legendary saint of Jazz. Fortunately for us the concert was captured not only on audio and released by CBS Records two years later, but there is a film of it in which Mr Liebman talks of the effect that John Coltrane had on us – not just with his music but also with his life.

It was that on-camera interview that seemed to define Mr Liebman and what music meant to him – not just ‘Trane’s music, an exhausting set that we had just heard, but all music and most importantly of all the life that you had to commit to if you were to give yourself to this demanding art of Jazz. He spoke with eyes often tightly shut and you had the impression that the words he spoke were etched in his heart and seared into his brain; that somehow he was made entirely of music, body and soul, like ‘Trane, the musician who he was honouring that day. And as the years went by the impulse to honour the music only became stronger, which is why all those years later Mr Liebman has come to be counted not only as one of the great saxophonists, but a teacher who has mentored numerous musicians all over the world where he travels regularly on teaching tours. His master classes engender rapt audiences top hang on to his every word as he teaches not only the effect that black dots on paper can produce when they take flight in Jazz, but his classes are evangelistic as they are sources of history that comes not only from doing battle with his instruments day after day, but from wrestling with The Music; learning at the feet of the masters. 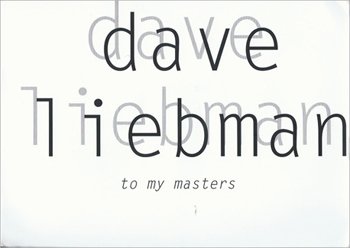 Now, in what is surely the most fitting tribute to those masters who helped nurture Mr Liebman’s art bringing it to its great fruition, the musician has released a book and accompanying CD entitled To My Masters. True to form the package is simply and elegantly designed and includes magnificent black and white photographs – one each to accompany every musical tribute to that specific master. It is a journey through the life of Mr Liebman and begins appropriately with chapter one, the first dedicatee or master being his parents, Leo and Frances Liebman who, we are told, not only nurtured him through a life-transforming bout of polio in 1949 when the “worked their butt off to make things right” only to see their son’s life transformed by his first experience of the music of John Coltrane, which as Mr Liebman points out “changed everything”. The music that goes with this short tender-hearted paragraph and charming photograph of his parents is entitled “Father/Mother”. It is a magnificent piece played with a controlled release of anxious breath through the tenor saxophone that certainly seems to take us back to Mr Liebman’s memory of being on stage when his parents heard him play at Carnegie Hall with Miles Davis. His mother, it seems caught on with baffling innocence as she said to her son, “You must be good!” Of course he was and continued to grow…

There are eleven chapters to the book, each dedicated to masters who had a profound influence on Mr Liebman’s life. Each is accompanied by a candid photograph of Mr Liebman with the musician in question. And, of course, each chapter is also a song which captures the essence of what that particular relationship meant (and means) to Mr Liebman, which makes for a breathtaking array of music that speaks to Mr Liebman’s chameleonic ability to musically bend like a reed in a stream whose water rushes ever onward like life itself. As a result the music is wonderfully varied in mood, emotion and spirit. Melodies weave in and out of personality traits about each of his masters that struck Mr Liebman, leaving not only an indelible mark on his work but certainly on his life as well. Notably among these was Bob Moses, a visionary drummer who seems to have first opened the portal of Mr Liebman’s mind to music and then guided him through its great secrets and mysteries. The tribute to Mr Moses is a tender ballad, “Amy” which, as Mr Liebman says was “written for a friend of his” but could very easily describe the deep friendship between the two musicians as well.