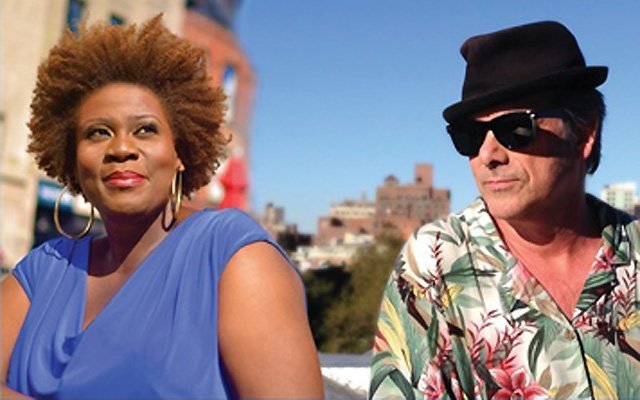 Although the prodigiously-gifted Maya Angelou has always qualified to be the Phenomenal Woman of Capathia Jenkins and Louis Rosen’s featured disc, she remained virtually unrecognised despite her myriad achievements, until she became only the second poet after Robert Frost to recite a poem during a Presidential inauguration – Mr Frost at the inauguration of John F. Kennedy in 1961 and Miss Angelou at Bill Clinton’s in 1993. Truth be told Miss Angelou had been prominent as a singer, actress, dancer, a poet and writer, and an activist who marched with Dr Martin Luther King during the Civil Rights Movement. But it was her recitation of “On the Pulse of Morning” at President Clinton’s inauguration that put her front and centre internationally. Of course that was after the (national) success of her autobiography – the first of seven – I Know Why the Caged Bird Sings (1969) and her association with the media superstar and longtime friend Oprah Winfrey. 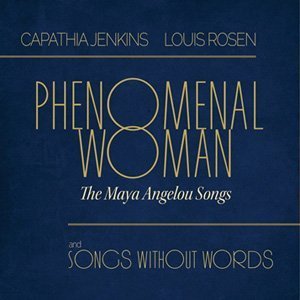 Perhaps the greatest reflection of Miss Angelou’s tumultuous life has been played out in her poetry and in her songs – published in several collections and – on record – with Ashford and Simpson on Been Found (Hopsack & Silk Records, 1996), also one of seven discs of her songs and verse. That, of course does not include numerous appearances on film and television, and scores of speaking engagements over the years. But while her voice is missing on Phenomenal Woman she lives and breathes through the voice of the inimitable Capathia Jenkins, who like Miss Angelou is also an actor on and off Broadway, film and television. On this disc Miss Jenkins puts the power and sultry beauty of her soprano to being the work of Miss Angelou to life through the music of composer and conductor Louis Rosen. The album completes for Mr Rosen, a trilogy of work honouring Black American poets Nikki Giovanni through One Ounce of Truth (PS Classics, 2008) and Langston Hughes with Dream Suite (Di-tone Records, 2016); both of which also featured Miss Jenkins.

Miss Angelou’s songs draw from life experiences which were both traumatic and soaring with hope and freedom. To this extent they draw on The Blues – not in (musical) form but certainly in spirit – in that her lyrics bob and weave from hopelessness and despair into the electrifying explosions of hope and the triumph of human endeavour. They are also stories told from a woman’s perspective and their emotional centres come from a place of deep vulnerability and enormous strength. Miss Jenkins captures all of these characteristics with naked honesty in the pristine majesty of her voice; in the manner of how she picks parts of a phrase in which to place accents that dramatise the pangs of hurt which are sometimes followed by an expression of triumph as she holds and elongates the syllables at the end of a word. There are many magical examples of this in “Think of About Myself” and “Some Blues I’ve Had”, and most especially in the chorus line of “Out Here Alone”. Through it all Miss Jenkins’ instrument is gorgeous; lustrous, precise, feather-light yet sinuous.

As ever, Miss Jenkins and Louis Rosen make a devastating combination – just as they did on the other records in this trilogy. Once again nervous systems go haywire when confronted not only with a committed performance such as this, but also because of the intuitively empathetic manner with which Mr Rosen has approached Miss Angelou’s work. Imagine the impact then when careful composition meets equally careful arrangements for brass, reeds, winds and a rhythm section. Mr Rosen is also a first call and inspirational artistic director. This – plus what seems to be an extraordinary feel for Miss Angelou’s poetry of emotion – enables Mr Rosen to inspire imaginative performances from the ensemble. That so much scours the soul here is due partly to the shared vision of Mr Rosen and also that of these remarkable players, who dig deep into the idiomatic music with passion and grace in equal measure. This is true not only of The Maya Angelou Songs but perhaps more so of the Songs Without Words with which Mr Rosen has conjured in the most magical sense, the spirit of Miss Angelou.

This overall package falls just a tad short of perfection only because the booklet does not contain Miss Angelou’s lyrics. Even the immaculate quality of this recording by Scott Lehrer would still do with a booklet in which printed lyrics are available for the listener to follow. This is, after all the work of a poet and songwriter, and that too, one of the stature of Maya Angelou. In terms of artistic content brought to the table by Miss Jenkins’ flawless delivery, as well as Mr Rosen immaculate music and the performance by the ensemble. All of this makes this a monumental venture, as much to die for as Maya Angelou’s own recordings, especially the unforgettable one with Nickolas Ashford and Valerie Simpson.