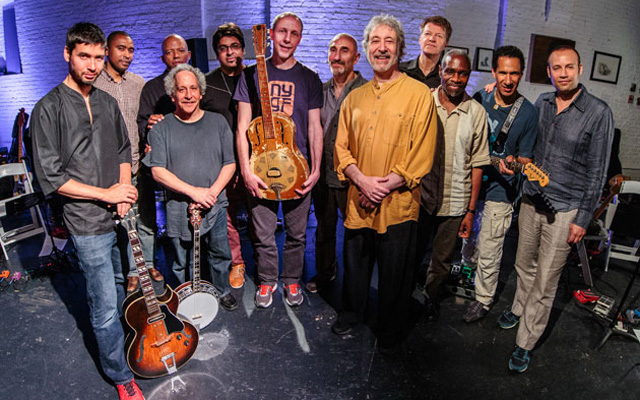 This musical work is comprised of thirteen “miniature concertos” interspersed by twists in musical direction, beginning with a definition of the theme in the very first track, awakening the music with symphonic splendour, by the entire Orchestra, “Sun Salutation” that flows into its reflection or alter ego, in “Turning Towards the Light” and from there on through the dramatic odyssey of “Nommo”, featuring Mario Capelli and Nels Cline, and Liberty Ellman and Miles Okazaki, “Heliotropic” with a moving duet between Liberty Ellman and Rez Abbasi and “Sol Sistere” which features Marco Capelli in solitary splendour. It is however clear that the music’s bookends swerve one into the other; further evidence of the welcoming of the dawn of dawns, the unravelling of the mystery of mysteries, with worshipful intensity. This lasts for the entire length of the music—from “Sun Salutation” to the final dénouement, the raison d’être of this monumental work, “Turning Towards the Light.”

Yet all is not as simple or complex as it has been made out to be in the aforementioned paragraph. 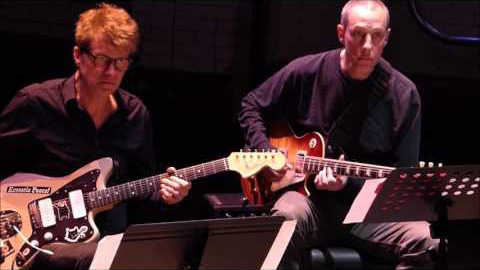 In actual fact, TURNING TOWARDS THE LIGHT is a magisterial edifice with only a defined beginning, but no defined end and an all but continuous, epic musical journey that flows right out of the shrill bending sound of its first exquisite notes until the interminable piece returns to the aether from whence it came. The various sections of the suite—each reinforcing the composer’s belief in the interconnectedness of all aspects of sound—are all woven in an endless warp of time. And so, with rare, almost singular ingenuity Mr. Rudolph guides his score from out of its seemingly primitive, monophonic beginnings to an epic charge that takes place in a zone that can only be experienced with complete body and soul, preferably with eyes closed and fingers gently pressed together as in a Yogic mode. The reason: in what seems like a time-space continuum almost embodying the energy of e=mc2, the poetics of its composer, Adam Rudolph is fused into the tactility of this music of TURNING TOWARDS THE LIGHT in such a manner that all this is realized by the instrumentalists of the GO: Organic Orchestra skippered by the old soul of modern music. The absolute summit of the work is, of course, “Turning Towards The Light” the Olduvai Mi where the guitars’ sonic libretto slips into what seems like a Latin biochemical scat that brings a breathtaking polyrhythmic touch to the vocal gymnastics of the entire Orchestra, where earlier, in “Scintillant” acoustic guitarist and effects specialist Marco Capelli causes the whole body to quiver delightfully with the stutteringly executed syllabic breakdown of glittering accents and magical slurs in his majestic dramaturgy.

And so, as Mr. Rudolph peels away layer upon layer of music from a primeval electric whine of “Plane of the Elliptic” through the guitarists’ heartfelt orations throughout our own ever-present journey with the Ensemble right up to the dramatic and soaring arpeggios of the host of guitarists that close this performance on the arc of a curve of Euclidian proportions as the music fades, but only just… For it seems that this may be a mere beginning of our own invited journey into the exciting, never-ending musical world of Adam Rudolph.

TURNING TOWARDS THE LIGHT is a monumental tour de force, with only a defined beginning, but no defined end and an all but continuous and epic musical journey that flows right out of the shrill bending of sound of its first breathtaking glissandos. The various movements of this suite—each reinforcing the composer’s belief in the interconnectedness of all aspects of sound—are woven in an endless tapestry of time.

This is a work that defies definition. Is it a Ba Banzele unravelling? A Balinese gamelan? A western orchestra? Its inspiration lies in all of these and yet it is, to be exact, the Adam Rudolph’s creation interpreted by an orchestra of our time. It speaks the call and response of the blues and the fascinating interaction between the voices of the guitars. The primordial dawn of heraldic stringed instruments reflecting the interminable dance of moments in time. It is the recreation of the music of communion.

By the way, it was wholly appropriate that this recording was made during the winter solstice of 2014, a most auspicious time for adding a new palimpsest, TURNING TOWARDS THE LIGHT, to the eternal library of learning. Its sweeping epochal nature returns what it took from the veritable musical vortex and gives its essences back so that this new piece of music might be born again of proverbial vortices, an all-new turning toward the light resonating as one because we are all in it together. After all, Teamwork makes the Dream work.

Coda: On July 25, 2016 the Press Room of Chamber Music America put out the following notice: “Chamber Music America (CMA), the national network for ensemble music professionals, today announced the recipients of its 2016 commissioning programs, supporting the creation of new works for small ensembles. CMA will distribute a total of $483,100 to 21 ensembles through two of its major grant programs: New Jazz Works, supported by the Doris Duke Charitable Foundation, and Classical Commissioning, supported by The Andrew W. Mellon Foundation.
The ensembles selected this year reflect the diverse array of styles performed by small ensembles in the U.S. today, ranging from classical/contemporary keyboard sextet to jazz piano-violin duo to traditional wind, string, vocal, and jazz quartets. Independent peer panels of jazz and classical musicians selected the grantees in their respective programs in the spring.”

It should hardly come as a surprise that Adam Rudolph was one of the 21 recipients of this prestigeous grant.