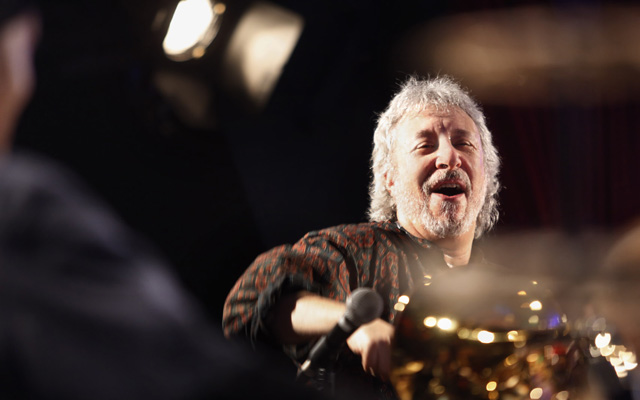 Jump cut to music to the realm where Adam Rudolph exists; to the realm of the quintessence, where musical texture and timbre is spoken of in the omnipresent dynamic of “ηχη or ήχος” The preternatural demesne of all sound—speech and song. From the monophony of a single melodic line, through the invention of the 17th century “Camerata,” to the multicolored, multi-textures of polyphony, woven together into an almost mystical musical fabric. Embracing the instrumental voices that resemble fluttering sopranos and meandering altos, sinewy tenors and grumbling basses… In the case of this album, succulent strings from guitars wailing their call and response to each other and to the rumbling and mercurial bass in counterpoint with stammering and stuttering, and finally emerging into the warp and weft with dazzling arpeggios, gleaming glissandos included in the design of a magical musical tapestry. Through the ages the language of music has evolved in proverbial leaps and bounds; today incorporating even the dramatic manipulation of electronics to broaden the spectrum of sound. As with the language of music, so also with its literature, which is why to the artistic gems of polyphony we must now add, what must surely be the magnum opus of one of today’s most gifted voyagers in the realm of sound.

This, of course, is the majestic and magical journey, Adam Rudolph’s TURNING TOWARDS THE LIGHT, an orchestral sojourn with the maddeningly inventive, New York-based new music collective, the GO Organic Orchestra. 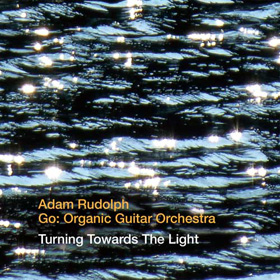 Mr. Rudolph has always seemed to give notice of his ingenuity and singularity as a composer. To musicians associating with him and participating in his works, Mr. Rudolph has constantly challenged them to peel away established concepts and beliefs about the manner in which music is produced and consequently to be heard and seen. Accordingly his music presents a dramatic and exciting challenge to listeners as well. As a composer, like the modern day Pied Piper in the imaginary world of Hamelin, he seduces his listeners, beckoning them to an exciting, unfamiliar place where they can give themselves over to his music unconditionally as they listen with visceral physicality as they experience the sculpturesque, spectral nature of sound: his sound which seems to exist as five elements and four dimensions. In doing so, with magical dynamics, Adam Rudolph is able to create a music so forcefully present that it must be heard not just with the ears, but in some weird tactile sense, with the entire body and of course the soul as well. Here Mr. Rudolph becomes one of only a handful of composers and performers who are able to conjure this kind of cuboid experience—something that appears inspired by the Dogon, and among others the Tupinambá of Brasil, the Mbenga of the Baka people. Mr. Rudolph also belongs to the continuum that begat men like the great composers of the 20th Century: Edgard Varese, Karl-Heinz Stockhausen, Gerard Grisey and others. Out of this has come a work of immense significance.

In many respects, TURNING TOWARDS THE LIGHT seems to be an extended work destined to flow from the mind and the body of Adam Rudolph. It seems to have emerged almost as painfully and joyfully as a child does from a womb and the drama of the composition’s birth is so real that not only can the ears experience its primal cry, but fingers it would seem can touch the skin of the sound and delight at its ethereal pulsating and palpitating softness. To get back to this album, TURNING TOWARDS THE LIGHT is an extended composition created by weaving, as if by magic, the various timbres created by the participating guitars played—in this instance—by the GO Organic Orchestra into a musical quilt of ever-changing texture and design. And whilst all this is taking place in the three visible, very tactile dimensions, the voice of individual guitars in their sung, annunciated and various vocalastic incarnations including their narratives, mythologies and mystical melismas seem to emerge from the fourth and timeless dimension! That the dimension of time should be stopped, then extended interminably by the various guitar voices is the coup de grace of the work.