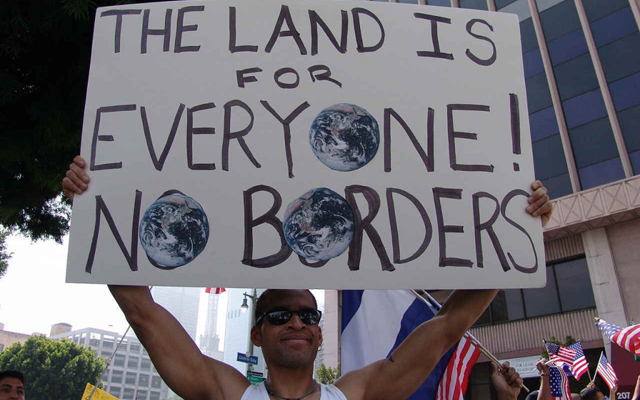 Immigration is too important an issue to be debated on the terms set by Fortress Europe or the Tories, argues Lindsey German

The question of migration remains one of the biggest in politics today. Often discussed in Britain through the prism of Brexit, it is obviously a much wider question affecting large sections of the world’s population, and raising hugely important questions for socialists everywhere.

I start from the assumption that I am opposed to immigration controls. This is a minority position even on the Left but it is the dominant positions of those on the far left. The argument is often put simply that if capital can move where it wants, why shouldn’t labour? I would add two other factors: it should be a human right to move freely if that is the desire of a person. I would be outraged if I could not move to a country of my choice for whatever reason, and I don’t blame anyone else for feeling the same. In addition, most studies show that migration to a particular country decreases when there is a slump or recession and increases when there is a boom and jobs are expanding; studies also show that migrants tend to contribute more to societies they move to than what they take out. So there is a general process of regulation which works without the need for states, border controls, immigration laws etc etc.

The argument is usually put these days in terms of the free movement of labour, following from the EU terminology. I have no objection to this but feel it can be misleading so let me make it clear from the outset: I support migration from anywhere, and abhor the Fortress Europe ideology which allows free movement within Europe but prohibits it from outside those borders.
Whatever happens with Brexit, we know that the issue of immigration isn’t going to go away. It is at the centre of modern capitalism and while it can be disrupted by wars (as well as caused by them), natural disasters, economic crisis and of course draconian laws and repression, it will continue. It is fuelled by neoliberal capitalism and the deep regional and class inequalities it creates.

If migration is created by capitalism so too is the reaction against it. For most of human history, there have been no such things as immigration controls. That didn’t mean people were free to move: most had no possibility of travelling any distance, often they were subject to systems of slavery or serfdom. In settled agricultural societies people tended to live close to the land and more often than not stayed close to the area they had been born and grown up in.

Capitalism destroyed that relationship with the land for millions of people, forcibly driving them off the land (in Britain through enclosures of the commons and the Highland clearances in Scotland which replaced humans with sheep.) People had no choice but to move in order to earn a livelihood and sometimes this involved crossing borders and seas.

Britain was the first industrial capitalist society, born in the violence of enclosures and employing men, women and children to work in prison like mills and factories. Workers crossed the country to find such employment, especially the young and fit. They also came from other countries including the Netherlands, France and of course Ireland. Usually, they worked in the hardest conditions, with some of the worst housing and conditions. Britain was also for political and economic reasons something of a haven for dissenters from abroad in the decades after the revolution. These included, of course, Karl Marx and Friedrich Engels, who were exiled from their native Germany after the failed revolutions of 1848.

Throughout the 19th century there was no restriction on immigration to Britain and by the end of the 19th there were, as well as large Irish populations, major Jewish areas in some big cities made up of people fleeing persecution from Russia and Eastern Europe. It was only in 1905 that the Aliens Act was passed, following a period of anti-Jewish agitation by the far right British Brotherhood. The Jews remained the target of racists throughout of the 1930s (and incredibly even after the Second World War).

However, with labour shortages and a booming economy by the late 1940s, immigration was encouraged again. Commonwealth citizens were able to travel freely to Britain and many did so from India and Pakistan and from the Caribbean. This only changed in the 1960s with growing agitation and racism about these migrants and also doom laden predictions about the arrival of East African Asians who had British passports from newly independent African countries such as Malawi, Uganda and Kenya. A series of immigration laws were then passed, and these have continued, all of them tending to discriminate against black and Asian migrants and taking a much more relaxed view about white immigrants from Australia or South Africa.