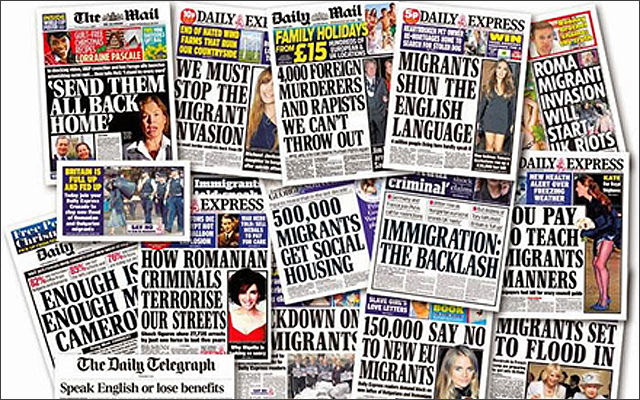 This is because immigration controls were never about the ‘problems’ of too many people living in Britain but about racism. They were aimed at poor, black or brown people living in often horrendous housing conditions and doing usually low paid and low-value jobs. The racism against them was whipped up in precisely the poorest areas with the aim of turning people of different races against each other, in order to keep them poor. So it continues today.

Immigration today and the Left

At present migration from the rest of the EU is allowed freely into the UK, but is severely restricted from outside. Despite this many people from parts of Africa, Asia and Latin America try to get to Britain. If they are rich they have no problem. It is perfectly legal and easy to migrate to Britain if you can prove that you are wealthy. Otherwise, they are subject to draconian and unfair restrictions on their rights, to persecution and criminal sanction, all for the right to come and work usually in unfavourable conditions.

The criminalisation of so much migration and the very high levels of state intervention in migration questions are at unprecedented levels in Britain today. Landlords, university authorities, school teachers, all have to augment the roles of the already sizeable army of immigration officers, detention centre guards and police in a systematic oppression of a very considerable section of the population. Such surveillance not only creates a divided and more racist society, it also helps to reinforce conditions where migrants have to accept the worst work conditions, housing, and sometimes illegal treatment for fear of exposure to the authorities.

This process is a completely cynical one: those responsible for it know full well that it will not stop or deter immigration, precisely because people will always try to migrate to places where they are able to earn more and live more comfortably or safely. So as migration has become more criminalised or restricted in legal terms, so it has continued to increase. The whole nature of neoliberal capitalism both creates the conditions for migration and depends on migrant labour for its smooth running.

At the same time that its official ideology may accept some levels of migration, its media and its political right use migration as a major political weapon of divide and rule. There is acceptable ‘controlled’ migration (of skilled, often white migrants from for example other parts of the EU) but then there is unacceptable ‘uncontrolled’ or ‘illegal’ migration (Mexicans to the U.S., Africans to Europe).

The trade unions have historically played a mixed role in their attitudes to migrant workers, sometimes opposing their entry into the workforce, at other times recognising the need to organise migrants not least to prevent the undercutting of indigenous workers’ wages and conditions. The source of much conflict in the 19th-century workforce was over such processes (then often through the introduction of Irish workers into the workforce – which was often the origin of religion conflict in areas such as central Scotland and Lancashire.)

When Karl Marx helped to found the International Working Men’s Association (the First International) in 1864 it was at least partly with the express aim of preventing workers from different countries from acting to undercut wages and conditions across borders. Then, as now, this was a central question. Marx estimated that by 1870, shortly after the end of the U.S. Civil war, half a million Europeans a year were migrating to the U.S. in search of a better life.

His argument was that workers should unite to defend their common interests against the employers who were increasingly operating across borders. They had to form organisations, overcome differences of language and culture, and jointly enforce decent wages and conditions for everyone.

This is a pertinent question today, when high levels of migration in Britain are commonly connected with the significant fall in wages and worsening conditions which have afflicted millions of British workers. It is often argued that such migration has led to these falls. Various arguments have been put forward, from straightforward restriction on migration to schemes such as migrants signing up to unions before getting jobs, or preventing agencies from advertising in Central Europe. This has become an argument within Labour, with Jeremy Corbyn under criticism for talking about the problems of migrant workers replacing British workers. Corbyn has a good record on supporting migrants and continues to do so but he is clearly under pressure from those to the right who want to restrict immigration, supposedly in response to widespread views of Labour voters.