Home Masthead Gunter Hampel at 80: Still Ahead of Time
I once wrote a review of an album by Gunter Hampel. It was called Music From Europe (1966) which was not only one of the earliest examples of the reach of Bernard Stollman’s ESP Disk label into the Continent, but one of the greatest expressions Jazz by a musician from outside the rather narrow circle of closely-held Afro-American ancestors. It was also three whole years before Gunter Hampel would make his own iconic “Jazz saxophone” album The 8th of July 1969 Although it is simply called Music From Europe, the Gunter Hampel Group’s first foray into America in 1966, could well have joined the ranks of several early (1950s) recordings by MJQ or John Lewis and Dizzy Gillespie’s Perceptions (Verve, 1961) as one of those earliest modern examples of where the musical cultures of classical Europe and jazz USA collide.

Perhaps the title is even deliberate; a tongue-in-cheek reminder that jazz—although, in its absolute form a musical idiom evolved from the Afro-American blues—might also be “spoken or sung” in another, albeit eccentric idiom far away, even from the avant-garde musical movement of the 1960s. 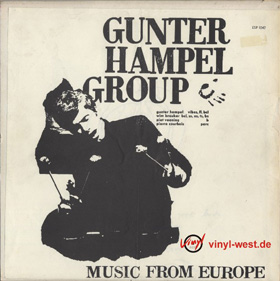 This is probably the hypothesis of Gunter Hampel’s very forthright record. So it was made after most of Europe had heard John Coltrane’s music of his late period… so it was made Eric after Dolphy marched through Europe with the all-conquering Charles Mingus band… So what?

Gunter Hampel born in Germany in 1937, being brought up on a staple of European classical and German folkloric music collided with jazz when he heard Louis Armstrong, who “spoke” to him in jazz, by then the only language he cared to understand after the War. But Mr Hampel is more like Bartok, at least in his early interpretations of his impulses that he laid down musically. By the 1960s he was so completely immersed and proficient in each of the three milieus that he could lay claim to making a statement in a third stream, music from Europe. This is really what he laid down on this record for Bernard Stollman, in Baarn, Holland just before Christmas in 1966. It then heralded Mr Hampel’s entry into the US.

Music From Europe is literally a collision of cultures. And it is an oblique early interpretation of the idiom of jazz by arguably one of Europe’s most influential musicians. Coming as it did at the height of the avant-garde movement of the 1960s, it stands out as one that has complete sonic architecture—in song form and structure. Gunter Hampel on vibes, bass clarinet and flute is ably assisted in his small group master class by another stellar artist, Willem Breuker on saxophones and clarinets, the Dutchman, Piet Veening on bass and Pierre Courbois on percussion. Together they power their way through an impressive program comprising three gigantic songs.