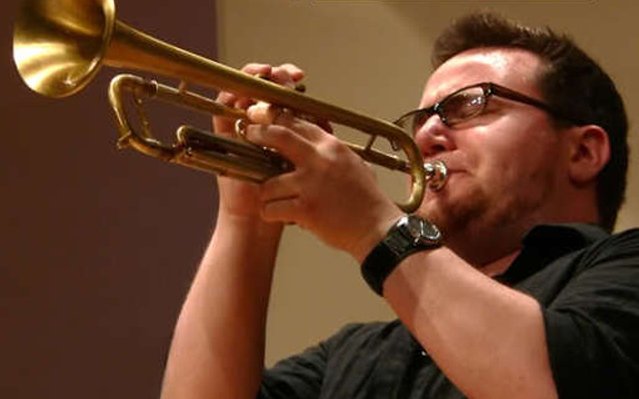 “Repeal and Replace” pokes holes in Trump’s proposed plan to replace the Affordable Care Act. During his campaign, he promised to repeal health care and then replace it with something better. Ironically, he never arrived at a plan for this. But my theory was that his new plan would be identical to the old one. This piece starts out chaotic, combining elements of “Powerhouse” (Raymond Scott) and “Computer” (Bob Mintzer). The music ends abruptly, signifying the repeal. The solo trumpet represents the helplessness felt be someone who lost their health coverage. The groovy part in the middle could be heard as the new plan taking effect. It eventually descends into the same chaos from the opening, a reminder that the same problems will exist in the new health plan.

When I wrote “The Great Wall” in 2017, Trump’s proposed border wall seemed like a pipe-dream for racists. In this composition, I tried to channel the gleeful feeling that a MAGA (hat) wearing, anti-immigration Republican must feel when they imagine a version of the USA without their perceived problem of illegal-immigrant criminals. It is also perfectly acceptable to listen to this track end enjoy it for its groovy beat…I think.

“Pink Sunset” is a lush ballad; an homage to my hometown. In Los Angeles we enjoy beautiful, pink-coloured sunsets. I understand that this is due to the way that the sunlight refracts through our cloud of pollution, but it is beautiful nonetheless. I wrote this piece with Bob McChesney in mind. He plays the amazing trombone solo.

JDG: What do you hope for this music? Is it getting airplay? Are you touring with this theme?

ED: I hope that lots of people listen to it. That is all that most artists want for their music. It is definitely getting airplay, though it is difficult to track exactly how much.

JDG: Are you working on any other music right now or in the future?

ED: I have a bevy of other projects in the works. Around the same time frame as Make Big Band Great Again a couple of other projects I worked on were released (and are available now). I arranged “Happy Holiday” for Martina McBride’s album It’s the Holiday Season and I wrote three arrangements for Mark Blake that he released digitally as singles. I am currently working on a few arrangements for a vocalist in Cleveland, a chart for a well-known vocal jazz group, and other projects as well. I have another release written for my big band that I hope to record early in 2019. It will be a bit of a departure sonically from Make Big Band Great Again. That (forthcoming) new album toys with some disparate influences (Jaco Pastorius, Dr. John), and forgoes the political theme in favour of lighter fare.

JDG: What else is of interest to you? Apart from writing and arranging that is…

ED: My wife and I love spending time at the LA Zoo. My next project is actually inspired by many of the animals that I discovered there. I’ve written pieces called “The Cassowary” and “False Garial.”

JDG: Please feel free to add anything you’d like to talk about…

ED: Make Big Band Great Again is available on iTunes, Spotify, Apple Music, Amazon Prime, YouTube, etc. Listening to it, beginning to end, is the best way I can think of to spend 18 minutes of your day.