Stefon Harris is one of the most sublimely gifted vibraphone players today; a Young Turk who exploded on the scene when he joined forces with David Sánchez, Harold López-Nussa, Christian Scott and others to make the Ninety Miles Project. But his true genius at composition and arranging; shaping and sculpting the music that he continues to play on albums under his own name has marked him as one of the most prodigious artists playing any instrument today. The intense, well-shaped and cogent performances on his 2019 album with his band Blackout, Sonic Creed clearly reinforce this reputation.

Mr Harris’ mellifluous, expressively generous, expansive style and the fiercely driven rhythmic muscle makes for exquisite listening and all of the above can be heard – all at once – on “Let’s Take a Trip to the Sky”, a song made more magnificently coherent and nobly expressive with the vocalastics (on one of two charts) by Jean Baylor. Her performance, together with the atmospheric s provided by keyboards-player 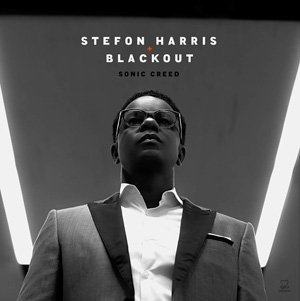 James Francies, and Casey Benjamin’s vocoder, both of whom follows Miss Baylor’s soaring voice. All of this is, of course, redolent with Mr Harris’ own magnificently toned performance on vibraphone.

The album is beautifully paced, racing ahead at its start with a breathtaking version of Bobby Timmons’ and Oscar Brown Jr.’s “Dat Dare”, then floating dreamily with the song featuring Miss Baylor, leaping again with Horace Silver’s monumental “The Cape Verdean Blues” in which Mr Harris shows off the uncommon virtuosity that set him apart among young vibraphone players when he first came to be heard. His choice of notes is clever; often full of so much surprise that he seems to create phrases that leap and gambol in sharp arcs and parabolas as if creating a mighty musical geometry all his own.

Mr Harris‘ ensemble – Blackout – is peopled my musicians who are fully attuned to his musical vision and artistry. Mr Francies is just one of them. Others include bassist Joshua Crumbly, drummer Terreon Gully – both brilliant throughout – together with Casey Benjamin on winds, Felix Peikli on reeds and Mike Moreno on guitar (when needed). Guest stars include Regina Carter on Bobby Hutcherson’s “Now”, the ubiquitous Pedrito Martinez who thrills at every turn, as well as Joseph Doubleday (featured on marimba), Daniel Frankhuizen on cello and the brilliant Elena Pinderhughes on flute.

Together with this powerhouse of a group, Mr Harris has crafted an album of rare beauty. The epitomé of it all is perhaps the beautifully dark version of Abbey Lincoln’s “Throw It Away”, which like the rest of the songs on the album features a refreshingly un-egoistic performance that works on so many levels and reminds us once again that he is one of the finest young musicians making waves in Jazz today.