As performances go, the Steve Gadd Band’s Way Back Home is striking for its precision and elegance and it may be only until you get to the end that you feel the full import of the enormous emotional weight it carries. Gadd is, after all, returning to where it all began for him: Rochester NY, his home, where young dreams grew old, music flowered and bloomed; where the whisper and thunder of his drums first informed the world of music that a sensational new percussion colourist was on his way. An iconic musical journey has come full circle and it could not have happened at a better time – when the drummer turned 70 years old. 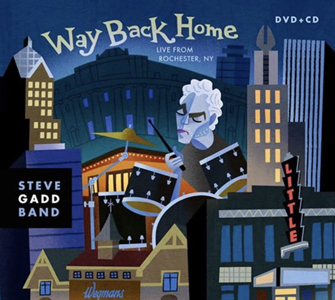 With all of the increasing level of noise surrounding drummers and their instrument in the modern musical context it is very likely that the listening (and viewing) public might have had some niggling doubts about the veracity of Steve Gadd’s playing. This dissipates in a heartbeat, as it were. The DVD begins with a fascinating arrangement of Keith Jarrett’s ‘The Wind Up’. If you were expecting an explosion (you know how the song goes), you’re in for a big surprise. Gadd focuses on the poetry of the song; the spiraling lines, its ascent and descent as in a musical version of Duchamp’s Cubist painting showing a Nude Descending a Staircase Nr. 2’ Gadd is the consummate craftsman. He is the epitomé of the poetry of forward motion. He exudes lyricism as he eggs the rest of the band on to greater heights – the heights of melodic invention. And while it is now almost a cliché to talk of the drummer as a melodist you get a sense of how true it is when you listen to the sound of brushes stirring the pea soup or the sizzle and bop of sticks on cymbals. It’s like listening to (or watching in this instance) an old-fashioned master melody-maker at work. ‘Bye, Bye Blackbird’ is one of those displays of lyricism that you will never forget for exactly those reasons.

Steve Gadd has been around for decades. He has brought his unique ability to re-colour the music of other musicians. Paul Simon and Art Garfunkel would testify to that as would Steely Dan, Eric Clapton, Grover Washington Jr, Al Di Meola, Chick Corea, Yusef Lateef… the list is as long as your arm. No matter whom he is playing with or what the musical situation, Gadd’s main strength has been to provide a spacious setting for rhythm, in such a way that it elevates melody and harmony. To that extent he is a songwriters’ dream and this is evident from how many vocalists he has accompanied. On Way Back Home, however, Gadd appears with his group of two albums past. The Band is made up of Michael Landau on guitar, Jimmy Johnson on bass guitar, Walt Fowler on trumpet and flugelhorn and Larry Goldings on keyboards. It is a group of musicians as accomplished as Steve Gadd who, together, enjoy a striking, telepathic connection.

Viewing this concert as a DVD holds a distinct advantage for the Gadd fanatic. The big close-ups shot through the battery of drums is filmed with wonderful focus on the movement of Gadd’s hands and the various permutations and combinations that he essays to lay out the rhythmic pattern of each song. This is something that is well-nigh impossible in the vast auditorium where the performance took place. But the excitement is palpable, whether you were in the audience or in front of the television screen or CD player (this package includes a CD as well). However you choose to experience this extraordinary performance it is nothing if not a memorable one.