If you were one of those listeners – even a music aficionado – who sometimes spoke of the Yellowjackets in the same breath as Weather Report, or even Oregon, you would not be alone. But you would also be far from accurate about this extraordinary musical phenomenon. Made up of what was once Robben Ford’s back-up band (just like members of Oregon were for the Paul Winter Consort, by the way) the Yellowjackets came into their own from the very first music they made as an independent entity. Although drummers changed regularly at first, and the biggest change came when the often provocative wail of Marc Russo’s ubiquitous soprano saxophone was exchanged for the deeply assuaging gravitas of Bob Mintzer’s reeds, woodwinds and EWI. And then there was another changing of the guard when the big (not just physical) presence of bassist Jimmy Haslip made way first for Felix Pastorius and then for Dane Alderson. 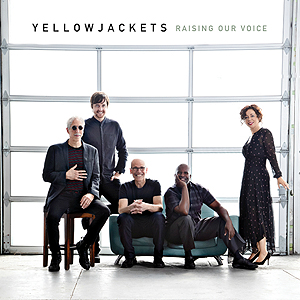 But make no mistake the signature sound of the Yellowjackets has always come from a profoundly meditative, almost haunting, percussive groove the slow-burning fire of which is ignited by the breathtaking virtuoso pianism of Russell Ferrante. It is this singular acoustic that swelled like a giant wave first with the musicianship of Mr Haslip and now with that of the inimitable Bob Mintzer and Will Kennedy who is in his second tenure with the band. Mr Haslip’s big shoes have been filled – for a significant period of time it would seem – by Mr Alderson’s sinewy and complex bass lines. Meanwhile the band has built its reputation by embellishing its music with electronics manipulators, programmers and wizards, percussionists and vocalists from Steve Croes, Judd Miller, Alejandro Acuña, Bill Gable, Michael Franks, Brenda Russell, Marilyn Scott and the great Bobby McFerrin, all of whom have dotted albums over time; until now…

This musical architecture of the broodingly beautiful 2018 recording Raising Our Voice has also been built on a fifth pillar; the vocals – and sometimes gracefully wordless vocalastics – of the incomparable singer Luciana Souza. The Brasilian wonder has added her musical quintessence to that signature acoustic sound born of Mr Ferrante’s breathtaking poetry of emotion, Mr Mintzer’s preternatural solemnity, Mr Alderson’s whipping bass lines and Mr Kennedy’s glorious percussion colouration. Miss Souza enters the world of the Yellowjackets so seamlessly that she has even been recognised as a co-creator of Raising Our Voice not only with compositions (or involvement in compositions) of her own, but by simply being cast into the soft, sensuous alloy of the band’s perfect sound. Indeed it’s as if Miss Souza has become – on this recording – the fifth member of the band.

The music on the album is a reflection of the troubling times in which we live, waking up to each day to something new and disturbing with depressing regularity. But ponder for a moment upon the title of the recording: Raising Our Voice is not simply a musical joining in to register of protest or outrage. This is, after all, the Yellowjackets and their music, while sometimes dark and foreboding is also triumphant and uplifting and that is the other dimension to this prismatic album title… and its music. Just as Mr Ferrante’s seductive and sinuous lines whip and soar in exultation at human endeavour and possibility, so do Mr Mintzer’s breathtaking soli and Mr Alderson’s fluttering leaps across registers, punctuated by Mr Kennedy’s heart-stopping rhythmic colours. Moreover with Miss Souza’s pure and high-sprung vocalastics woven into the music a chorus of silent hallelujahs underlines the songs of Raising Our Voice…

Look for this is the grand rhapsody of “Mutuality” and in the magnificent sequences of “Quiet” and “Solitude”. And find it also in the spellbinding textures of “Everyone Else is Taken” and in the mystique of “Ecuador” and “Emerge”. And watch for it to unfurl with uncompromising artistry in “Timeline” and the mysterious twists and turns of “In Search Of”, and also expect it to burst forth in the mighty effervescence of “Swing With It”, because that is exactly what the music of the Yellowjackets has always stood for and de rigueur will continue to do.