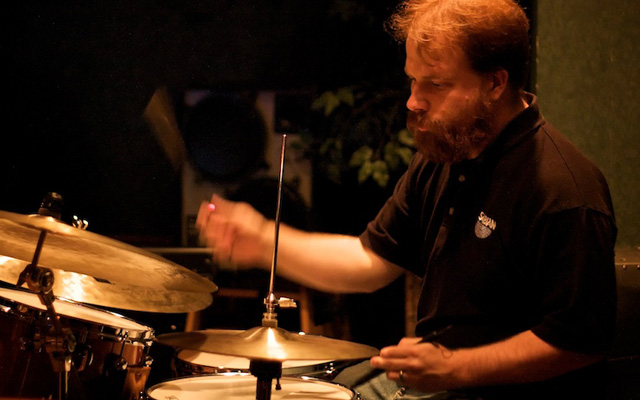 Although the title and, indeed the music of Hunters & Scavengers could sometimes conjure slightly dystopian imagery, the music also conveys moments of intense and uplifting ebullience. Even more significant is that this trio has been able to give credence to the idea that free improvisation can be songful as well. This latter aspect of the music on this recording separates it from the vast majority of free improvisation recordings that we might have listened in the recent past. However, more than setting themselves apart from the pack, so to speak, these musicians have made free improvisation more accessible in their ability to make the sounds of improvised music actually “sing”. 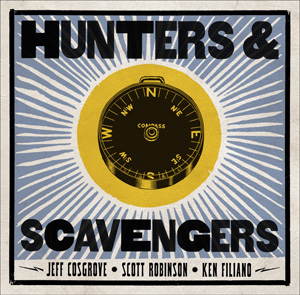 This is not at all something new. Musurgia universalis, Athanasius Kircher’s seminal thesis of 1650 on harmony in music spoke of the style of both composing and performing instrumental music which derives from phantasiren or “the art of improvisation”. And thus Stylus Phantasticus, a term Kircher first used then to describe a form of liberty in the composition of instrumental music which does not attempt to confine the composer’s imagination or force it to abide by strict rules. Jeff Cosgrove, Scott Robinson and Ken Filiano, on Hunters & Scavengers, may have inadvertently (or deliberately) hit upon this idea to create this remarkable music spread across the ten works imprinted here.

The music is also not simply intuitive, but intellectual as well. For instance, employing an outwardly calm manner Mr Cosgrove, Mr Robinson and Mr Filiano couch their anger – and angst – in rich and colourful sonorities , contrasting secure artistic “faith” with (a reaction to) the unpredictability of contemporary life and the politics of uncertainty. Sudden outbursts free improvisation reveals dark colours seemingly like outbursts of pent up grief and threats of retribution not only on “Eyes of the Hunter” but also on “High, Low” and especially on the raw emotion of “Instinct”. Meanwhile “Lonely Woman” is an austere, heartfelt interpretation of Ornette Coleman’s iconic work that employs a melodic fragment to evoke the difficulty of resolving grief, symbolising – it would seem – things left unfinished; a forlorn attempt to find meaning in isolation and the palpable absence of someone close.

This outstanding performance by these three accomplishes improvising musicians is an emotionally compelling and powerful work. Jeff Cosgrove brings a ghostly melodicism to his shimmering rhythms, Scott Robinson gives an over-the-top performance of his life, roaring and bawling his way through the music and Ken Filiano, through some delicate arco and intense pizzicato work brings considerable dramatic flair to this music as together these performers communicate a powerful atmosphere of Hunters & Scavengers in the form of powerfully felt responses to each other’s inputs to create a truly meaningful musical palimpsest describing a particular contemporary ennui.