Bob Mintzer has several hats: saxophonist, bass clarinetist, EWI-player, composer, arranger, Yellowjackets alumnus, big band leader, and journey-man (and heaven knows how many more). Remarkably, he wears every single one of them with great distinction, which might lead one to bestow upon him the title of a “rather great” musician and instrumentalist. This recording Meeting of Minds certainly gives credence to that on several counts, proven, of course, by his composition, arrangements, conducting of the Bob Mintzer Big Band, which is here joined at the hip with the New York Voices, and then there is of course, his own playing which shines on as he solos on “Weird Blues”. It’s hard to think of anyone playing today who has excelled and achieved so much in such a relatively short period of time. But Mr Mintzer is the exceptional one who proves…what rule? That old adage once spoken of by Horace in ancient times: “poeta nascitur non fit,” said Horace; meaning, of course, a “poet is born not made”. 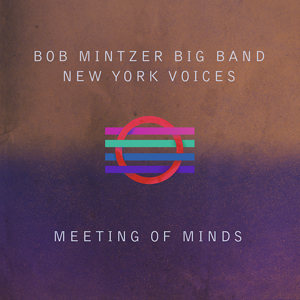 Every bit of this is not only true, but true of Mr Mintzer. He has made several big band recordings under his name, wielding a formidable baton also when he was honoured by the WDR Big Band who featured his music and invited him to conduct that august body of fine musicians. But Mr Mintzer’s big band is no gathering of lesser mortals either. Packed to the gills with terrific instrumentalists in every department; luminaries such as Bob Sheppard and Roger Rosenberg on saxophones, Bob Millikan and Scott Wendholt on brass, two members of the Ashby – Jay and Marty on trombone and guitar respectively, Phil Markowitz on piano, the inimitable Jay Anderson on bass, etcetera, etcetera, etcetera… And here also is the iconic New York Voices of Lauren Kinhan, Kim Nazarian, Peter Eldridge and the incomparable Darmon Meader, who is so much more than a vocalist in his own right.

And then there is the music of Meeting of Minds itself. Where once there was just the Andrews Sisters, Lambert, Hendricks and Ross, The Swingle Singers, Singers Unlimited, Manhattan Transfer and the Uptown Vocal Jazz Quartet (and we’re not talking here of others such as the great Staples or the vocal groups of Motown), the New York Voices have come to represent swinging vocal harmony at its finest with each of the component parts bringing his and her own colour palette to create a kaleidoscopic array of vocalastics that defy gravity, and therefore the senses as well. Each piece of this repertoire unveils the myriad delights of each voice – or combination of voices – and for this we not only have individual members of the group here but Mr Meader’s rare gift for arranging these component parts into not just a fully-functioning, but – a magical near-illusion of human vocal music endeavour. And with that we have just scratched the surface of Mr Meader’s gifts; he is a formidable saxophonist as well, but perhaps next time…

No album can be worth itself either artistically or in terms of dollars and cents. Meeting of Minds (is there a more appropriate name?) delivers this on every count. Repertoire is everything and here we have ten perfect specimens of the American Songbook (including a Mintzer-original). And each is treated with utter reverence and performed as if being something propitiatory to the composer and to music. Soli are monumental in every instance, but neither too short nor too long; nor is there one too many. In ensemble passages brass, woodwinds and reeds meld in one volcanic mix, erupting or simply boiling and bubbling over like fiery lava. For examples of this take your pick, but be warned, this is a moveable feast and “I Concentrate on You” may soon give way to “Speak Low”, and so on when you might spin this record again.

This is all part of Mr Mintzer’s intuitive genius for big band music and for the manner in which a great big band becomes a well-oiled musical machine. Finally – and this is key – being able to butt heads with a vocal group of such immense talent and power is akin to putting together a symphonic orchestra and an orchestral chorus together in a powerhouse mix and this is truly special for even the great symphonic orchestras are rarely brave enough to attempt such a collaboration. The Bob Mintzer Big Band and the New York Voices have just done that on Meeting of Minds and it’s turned out to be “one for the ages”, a recording to die for.