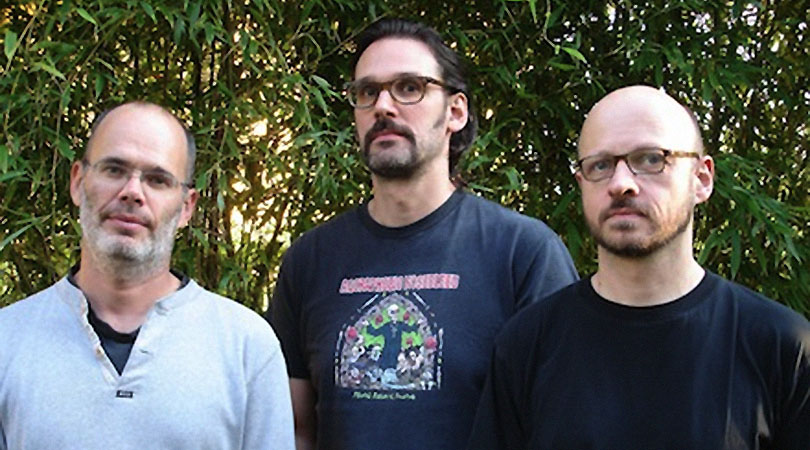 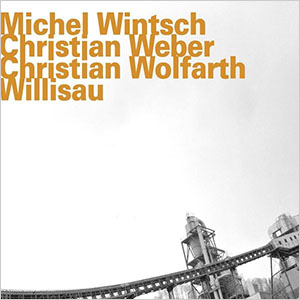 Up until now, in conventional trios—and even in unconventional ones—the individual members of that ensemble come together in the act of expressing singular voices on instruments both as distinct voices as well as collective ones. So, for instance, Keith Jarrett, Jack DeJohnette and Gary Peacock would be heard soloing as well as playing in an ensemble form, yet maintaining individual identities. This trio of pianist Michel Wintsch, bassist Christian Weber and drummer Christian Wolfarth have completely deconstructed this notion of the trio. The musicians—pianist, bassist and drummer—although they bring distinct instruments to bear on the music come together to create a pure triumvirate of sound in which the individual instruments have been completely subsumed by the collective colouration the sum total of the timbres that shift and change depending on which instrument is struck, bowed, plucked or hammered; the musicians play to create a completely new and authentic crucible of the sound of ephemeral music. And a great deal of mystique and magic abounds.

Make no mistake about it; despite the fact that nothing appears to be written and none of the music is structured in the form of a study or a piece, the music takes shape from the first few bars on the piano and then keeps changing in shape depending on the timbres and textures that flow out of the instruments. The names of the charts do not seem to matter so much, but they are intriguing, nevertheless. The first: “2.8 Feet Below, Tiny Fellows, Distant Neighbours” is a fascinating musical sojourn and really sets the course for the music. Keyboards, bass and percussion seem to weave warp and weft of a sail that carries an aural ship as if tossed by the wind on, to make it all the more complex, on an ocean of music. It is immaterial where this musical vessel is carried. The odyssey is a fascinating one. The sound of music continues with extraordinary feeling and emotion. And even when the musical ship appears rudderless, the essence of the music is never lost; on the contrary, the players find themselves at another port of call.

By the time the music wends its quixotic way to “Fragile Paths” the musical tapestry comes alive as if the flesh of its human protagonists are intertwined with the journey that they are on. There continues to be a pulse here, which seems to propel the music ever onwards. The players enunciate their notes and phrases with firmness despite appearing to tread softly as if on eggshells. The emotional aspect of the music intersects with the physics of its aural energy and a fascinating relationship between the relative mass of sound together with echoes of its fleeting notes unfolds as piano dances around bass; both held together by the glue of the percussion. “North West” comes from a somewhat bleaker prospect and the musicians are much more forceful and dramatic in their playing on this chart. Despite the colossal musical entities that came before it, the music here never fails to enthrall the listener, whose ears are held riveted by the sublime aural energy that flows from the art and mathematics of the sound of this record.

Pianist and composer Michel Wintsch’s unflagging inspiration springs from a rich and varied musical background. Linking jazz tradition with the raw power of “progressive” rock, freewheeling improvisation with the rigors of orchestral composition, virtuoso playing with digital editing and mixing techniques, he takes an approach that is both syncretic and poetic. A way of composing that leaves plenty of creative space to fellow musicians, yet establishes a style that is his alone. Music that is truly here and now, unclassifiable and migratory. Music that speaks to our senses as much as to our imagination, brand new but familiar. Music that sweeps along but never ceases to surprise us.

Born in Switzerland in 1964, Michel Wintsch succumbed to music as a child. Even then he refused the limits of what the schools teach. As time went by, the piano became a daily delight, a form of asceticism essential to his well-being. Creativity became a way of life.

He has worked for the cinema (notably for the Swiss director Alain Tanner), for radio, television and the theatre. He put the writings of Marguerite Yourcenar to music and composed the opera “Ma Barker”. His first live appearances were with the rock group “Monkey’s Touch”, which toured the circuit regularly in the 80s. He now plays numerous gigs and concerts with musicians who experiment with improvised music, including Fred Frith, Han Bennink, Martin Schütz, Michel Doneda, Ray Anderson, etc, and his regular trio he co-founded with American percussionist and composer Gerry Hemingway, and Swiss bassist Bänz Oester. These myriad encounters, exchanges and tours have given the music of Michel Wintsch a highly personal, unmistakable note.