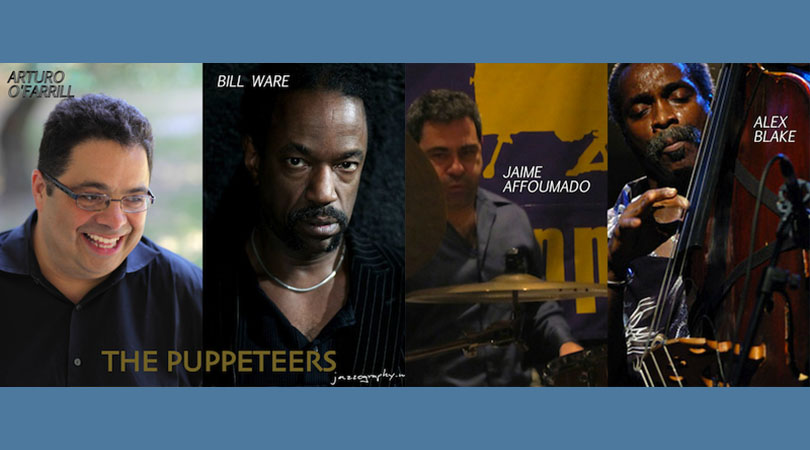 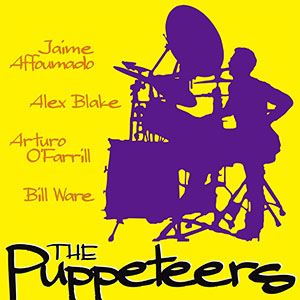 Puppetry takes great sleight of hand. Not only must all the strings function in a modicum of coordination, but puppets must coordinate with one another. In the case of The Puppeteers all puppets are in excellent hands. Although relatively young, pianist Arturo O’Farrill is something of a veteran as are the Panama-born, New York raised (in many more ways than one) bassist, Alex Blake, who conjures up Milt Hinton in some of his almighty solos; Bill Ware is equally magical, with his harmonic, four-mallet technique on the vibraphone and Jaime Affoumado a painter on percussion, who uses brushes and sticks as a painter would his myriad brushes. Each is a puppeteer in his own right and this unfolds at various points in the music. If the piano heats things up as it does in the more racy charts the vibes calms things down; and if the drums rattles and hums as a blue flame blazes the flibbity gibbet of the bass holds the music in check. Often the opposite is true of the instruments. This is only part of the reason why this music is so endearing. There is more…

Bill Ware is a musician’s musician. This is a loaded phrase and is meant to convey the fact that Mr. Ware is an amazing colourist, capable of shading the music with bold brush-strokes as well as extraordinarily subtle ones. His solos are Cubist; like Marcel Duchamp’s Nude Descending a Staircase the movement is vivid even when the colours are earthy and extremely muted. The resonance of his instrument enables Mr. Ware to thrust his music ever upward as if leaping and bounding from plane to plane with geometric precision. His extended solo on “Bio Diesel” is a fine example of the angularity of his attack and of his exceptional use of dynamics as well. Mr. Ware and other puppeteers leave the curvilinear melodies to pianist Arturo O’Farrill, who plays in rapid arcs of lines that carve the air around the musicians. Mr. O’Farrill’s long loping lines are also peppered with rapidly ascending glissandi and arpeggios that triangulate as on “Dreams of Dad” with the breathy soli of Bill Ware and with the harmonies of bassist, Alex Blake.

Mr. Blake is impish despite the erudition of his playing. His gravitas is derived from the depth of his gut and from the bottom of his soul. His harmonics growl and yowl depending upon which part of the register of his seemingly endless array of basses he employs on this recording. Mr. Blake’s harmonies are derived from rumbling notes that intersect the melodies like arrows and darts fired from the instrument that is superbly played by a master. Mr. Blake’s soli are also often accompanied by raw double stops singing the notes he is playing and he does so rather excitedly. This mode of playing was often employed by Milt Hinton and also at times by Louis Armstrong’s most celebrated bassist in his later period, the great Arvell Shaw. Alex Blake’s finest moments on the recording come on “On the Spot,” “Jumping” and on the ethereal beauty of “Peaceful Moment.” But Mr. Blake is only half of the rhythmists that also includes Jaime Affoumado, a drummer with a great deal of sensitivity as well as musical intellect. The Puppeteers would, in fact, be incomplete without Mr. Affoumado’s melodious and rhythmic colourations. To that extent the drummer is a magnificent addition to the band whose ingenuity, it is hoped, will last through a much more extensive repertoire.

Track List: On the Spot; Jumping; In Whom; Peaceful Moment; Bio Diesel; Dreams of Dad; Not Now Right Now; Lonely Days Are Gone; The Right Time.

Arturo O’Farrill, pianist, composer, educator, and winner of the Latin Jazz USA Outstanding Achievement Award for 2003, was born in Mexico and grew up in New York City. In 2002, Mr. O’Farrill created the Afro Latin Jazz Orchestra (ALJO) for Jazz at Lincoln Center due in part to a large and very demanding body of substantial music in the genre of Latin and Afro Cuban Jazz that deserves to be much more widely appreciated and experienced by the general jazz audience. His debut album with the Orchestra, Una Noche Inolvidable, earned a GRAMMY Award nomination in 2006 and the Orchestra’s second album, Song for Chico, earned a GRAMMY Award for Best Latin Jazz Album in 2009. In February 2011, Mr. O’Farrill and the ALJO released their third and newest album, 40 Acres and a Burro, which has been nominated for a GRAMMY award in the Best Large Jazz Ensemble Album category for 2011, and his debut solo album, The Noguchi Sessions, was released in July, 2012 to critical acclaim. Mr. O’Farrill’s website is: arturoofarrill.com

Bill Ware is a quiet giant of the vibraphone who defines the word groove as he cooks rhythms on a low burn, feeling where his fellow musicians are going, only to “strike out and impress with his four-mallet attacks of chords, cadences and arpeggios, surprising in every measure.” (allaboutjazz.com) Mr. Ware has performed, recorded and toured internationally with hundreds of artists, most prominently as a charter member of the internationally renowned jazz group The Jazz Passengers, which has featured guest appearances by Blondie star Deborah Harry, guitarist Marc Ribot and vocalist Elvis Costello. In the 1990s, Mr. Ware was at the heart of the New York City “acid jazz” scene with the popular band, Groove Collective. He toured with Steely Dan in the 1993- 1995 Alive in America concert tours as a member of the all-star band dubbed the “Steely Dan Orchestra”. Recent projects include Triple Goddess Twilight Revue – a tribute to Laura Nyro, the Rez Abbasi Acoustic Quartet, and a musical collaboration with the great Nuyorican poet, Tato Laviera. Mr. Ware’s website is: billwarevibes.com/

Alex Blake is a master upright and electric bassist who began playing professionally in his teens with Dizzy Gillespie, then with Sun Ra, Freddie Hubbard, Astrid Gilberto, Stan Getz, McCoy Tyner, Billy Cobham, Manhattan Transfer – among many other artists. A musical innovator, composer, and educator, Mr. Blake’s style ranges in musical genre from Latin/flamenco to post bop and jazz to rock and pop. He has recorded on multiple Grammy-winning album, received honorary awards and critical recognition, and tours internationally with Randy Weston and his African Rhythms band. He is currently working on a new CD with his post-fusion band, the Alex Blake Quintet, with original compositions reflecting all of his global influences – salsa, Middle Eastern, rock, RnB – and his dynamic and distinct playing style. A native of Panama, he resides in New York City and has appeared with Bill Ware and Jaime Affoumado at the Puppets Jazz Bar venue in Brooklyn, New York on numerous occasions. More information on Mr. Blake including his music, discography, and tour info may be found on his website at: alexblakebass.com

Jamie Affoumado was born in Bronx, New York on July 29, 1965. Jaime began the drums at the early age of three under the tutelage of his father, Ralph Affoumado. Jaime’s talents did not stop at music as he was also a child protege actor. He performed in the Broadway musical “Pippin” at the Imperial Theater in NYC. He also distinguished himself in over 100 television commercials and 3 movies. Jaime began playing in and around Manhattan clubs earning a reputation as a solid player and with guidance from others including jazz drummers; Kenny Washington and Tommy Campbell, Jaime soon founded his own group “New Hype Jazz”. They recorded several CD’s becoming one of the most popular downtown bands. From 2008 to 2011 Jaime owned his own jazz bar in Park Slope, Brooklyn called “Puppets”. Jaime wore many hats as the clubs proprietor, manager, and performer. Artists who performed regularly with Jaime are; William Ash, Bill Ware, Brad Jones, Randy Johnston, Alex Blake, Arturo O’ Farrill, Dean Bowman, Rubin Rodriguez and an international cast of many others. Jaime has also played with such notables as; Jaco Pastorius, Dr. Bill Taylor, Elvis Costello, Deborah Harry, The Jazz Passengers, Arthur Blythe, Cecil McBee, and many others.