Home Music Leslie Pintchik: In The Nature of Things 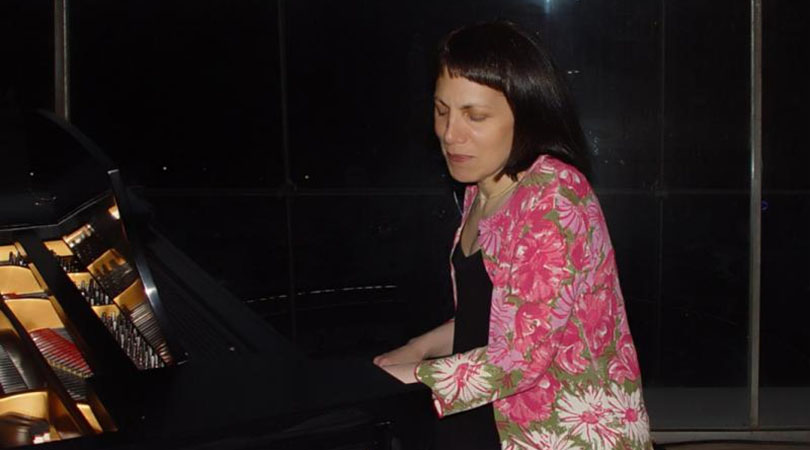 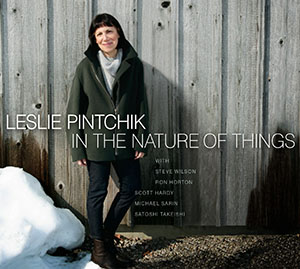 How can fingers so slight—even frail—make music that is so voluptuous? The answer may never be known, but happily this is true of pianist Leslie Pintchik and it all comes together on her aptly entitled album In The Nature of Things. At its finest, Ms. Pintchik’s music is full of emotional suggestion—far removed from that which is melodically literal and obvious. Moreover her touch is light; notes are never forced down and yet she can also be firm yet angular in her phrasing. Melodic lines are beautiful and undulating. There is also a kind of beautiful yin-yang movement in the rising swell suggested in the manner in which Leslie Pintchik plays off her bassist, Scott Hardy. Their exchanges are magnificent and come alive with sensuous musical moments that seem to embrace each musician as the songs unravel. Ms. Pintchik is also blest with the percussion colourings of Satoshi Takeishi; the spectral pings of the triangle, the gentle rustle of shells and the vanishing strumming on a guïro like instrument inform his almost ghostly performance. And on In The Nature of Things Ms. Pintchik has added additional colours and tones from brass and woodwinds to embellish the already gorgeous soundscape that emerges with each phrase and each line.

Leslie Pintchik’s musicianship is informed by deep, soulful emotion as well as bristling intellect. But there are times when such seriousness is tempered by a sense of puckish humour. It is at times like these that she comes close to suggesting her admiration of the music of Thelonious Monk. Although Mr. Monk was deadly serious about what he was doing, he could take wildly humorous romps into the infinite and beyond. So also does Ms. Pintchik. The pianist responds to the promptings of mind and body with sudden rushes of emotion; musical gravitas via phrases and lines that are erudite and leap from elevated planes onto more lofty ones, pirouetting and gamboling as they seem to float through the air before landing where they absolutely should, as planned. Ms. Pintchik also plays melodic lines, that seem to hang in the air at a certain point and just when it appears that they have nowhere to go, she tugs at the notes and urges that line to make an abrupt about turn; or she routes the line at an angle so sharp and unexpected that all seems lost until the music appears seemingly from behind a cluster of notes where it had wrapped itself. Ms. Pintchik’s music is replete with these little surprises that always find the listener catching his or her breath.

“With You in Mind” is one of those songs that begin with gentleness that suggests nary a ripple in its ocean of sound. Just as things are getting comfortable the pianist pulls out the stops and the music begins to unfurl in all its complex beauty. “I’d Turn Back If I Were You” and “There You Go!” are Ms. Pintchik’s reverential homages to the ubiquitous Mr. Monk. And a thoroughly beautiful one it is. A standard from the Alan Jay Lerner and Frederick Lowe, “I’ve Grown Accustomed to Her Face” was hardly expected and the manner in which Ms. Pintchik plays it is most edifying and absolutely her own. Much of the music on the album is breathtaking in scope and beauty because of the presence of this ensemble. While her bassist and drummer Michael Sarin perform with remarkable exquisiteness, as does the percussionist Satoshi Takeishi, so does saxophonist Steve Wilson, a winds specialist of immense charm and virtuosity, and trumpeter Ron Horton, who warms the music’s hearth. All of this musicianship, plus of course the immense beauty of Leslie Pintchik’s playing makes this album one that is hard not to listen to over and over again.

Track List: With You in Mind; I’d Turn Back If I Were You; I’ve Grown Accustomed to Her Face; Luscious; Sparkle; Terse Tune; Ripe; Ready!; There You Go.

Before embarking on her musical career, NYC based jazz pianist and composer Leslie Pintchik taught English literature (as a teaching assistant) at Columbia University, where she also received her Master of Philosophy degree in seventeenth-century English literature. Leslie first surfaced on the Manhattan jazz scene in a trio with legendary bassist Red Mitchell at Bradley’s. Red chose Leslie (along with guitarist Scott Hardy) for the warmth and powerful interplay he heard in their music. Red Mitchell wrote “Leslie Pintchik and Scott Hardy play miraculous music – in tune in all ways. And you can quote me on that.”

In the ensuing years, Pintchik formed her own trio with bassist Scott Hardy, and a series of drummers, including her current band-mates Michael Sarin and Satoshi Takeishi. Her trio performs regularly at New York City jazz venues such as the Kitano, Smalls Jazz Club, Bar Next Door, the Blue Note, Knickerbocker, and 55 Bar. Her trio was one of four finalists in the Cognac Hennessy Jazz Search, and more recently, they performed as part of the JVC Jazz Festival at the Kitano Hotel in Manhattan.

Leslie, with Scott Hardy and percussionist Satoshi Takeishi, released her debut CD entitled So Glad to Be Here on Ambient Records in June 2004. In his review in Downbeat magazine, Ken Micallef wrote “… Pintchik’s music is fresh, full of light and instantly invigorating…. So Glad To Be Here is simply a joyous release…. Pintchik and Takeishi express such playfulness in their musical conversations… that their elation is contagious.”

Her second CD, Quartets, also on Ambient Records, was released in October 2007. It features bassist Scott Hardy and drummer Mark Dodge, with special guest artists Steve Wilson on soprano and alto saxophones, and Satoshi Takeishi on percussion. Timeout NY wrote “Pianist Leslie Pintchik’s playing urges the same kind of reflection in her listeners that she uses to make things sparkle. Just check the reserved but gorgeous version of “Happy Days Are Here Again” on her new album, Quartets.”

In the fall of 2010, Leslie released two new projects: her 3rd CD, We’re Here To Listen, and a DVD/CD combo Leslie Pintchik Quartet Live In Concert. Both projects again feature bassist Hardy, drummer Dodge and percussionist Takeishi. Jim Wilke, creator of the nationally syndicated “Jazz After Hours” radio show included We’re Here To Listen on his “Best CD’s of 2010” list, and the jazz journalist and scholar W. Royal Stokes included both projects in his “Best of 2010” list.