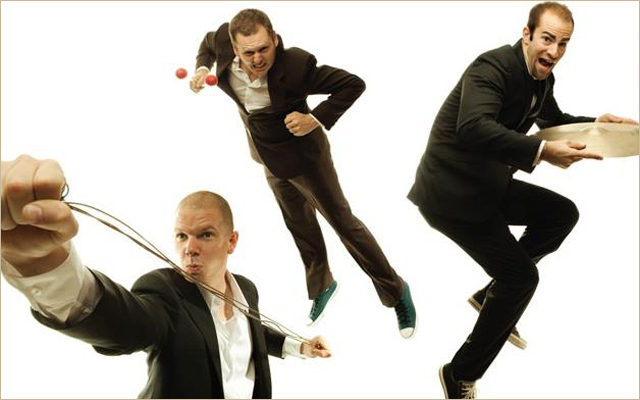 Between the three shafts of light disappearing into infinity in the circle within the circle of the stark graphics on the album jacket of The Wee Trio recording, Wee+3, and the radiant vibraphone, the death-defying boom of bass and drums, “R T 3” gets off to a jump-start. But there’s more; it is the drone of the otherworldly shredding of the guitar cutting into the hypnotic Sufi-like polyphony of James Westfall’s vibes, the rattle and hum of Dan Loomis’ bass and the rumble of Jared Schonig’s drums Wee+3 is summarily announced. And The Wee Trio, while still being quintessentially “Wee” is not wee anymore.

That is, quite simply, because three doors down trouble is brewing. With a sharp, swinging up thrust, épée-like Nicholas Payton makes a spectacular entry with rapid-fire notes pumping the air in a phrase that follows a draughty swiping down thrust of his trumpet. Loaded with sardonicism and dark visions of the terrible and the sublime, “En Garde!” he seems to sing, followed by #Bam! It’s “Sabotage” with Schonig’s parry and thrust – two sticks at a time – and a Rat-a-tat-tat in rapid sequence. 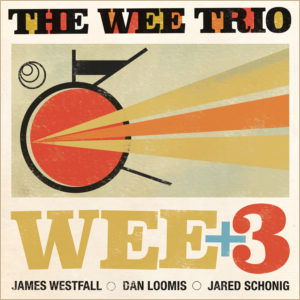 Here a melody is born not of human stasis, but an apocalyptic shout. And it is not very long before Fabian Almazan throws in the gauntlet with some challenging cross-handed leaps and modal rousing of the keyboard.

It is not long before the roulette curves widen like magical ellipses unfurling in hypotrochoids and epitrochoids from a Spirograph gone absolutely stark raving mad. One by one, Nicholas Payton, Fabian Almazan and Nir Felder cycle back and forth to make two more elliptical passes around The Wee Trio. The mind’s ear is flooded with dissonance and swing, sending up the lofty ideals of “Climb”, “Sound Evidence” and the shivery “Apparition”. The brain’s deepest recesses are literally completely invaded with this music. From then on it is just a matter of James Westfall’s cascading octave doublings getting grander and as the play into the heft and hands of passagework’s bass-lines.

The Wee Trio traverses the elegantly swinging music which is very much to the manner born, with a fine feeling for varied characteristic sonorities, tender poetry in lyrical slower movements and more roistering in the more bloody-minded as the music of The Wee Trio hurtles through the air at breakneck speed. Perhaps the most remarkable is the end portion of “Redwood” – and more so – “Apparition” which achieves an untold and immense grandeur unlike any other finale of a piece on any album – by The Wee Trio or otherwise.

In the contrapuntal and architectural clarity of this music – as well as elsewhere on the disc – is an unfailing energy, perfectly weighted touch and beautifully imagined layering of texture and dynamics. Only very infrequently, when executing long improvised statements is the flow of ideas interrupted, it would seem, by broken thoughts. However, these moments are few and far between and do not last long enough to become major irritants. Overall this is music that jumps out of the gates and gallops along with great stretch and beauty.