Home Music Walt Weiskopf: Fountain of Youth
Using all of his characteristic driving momentum in Fountain Youth Walt Weiskopf has dug a deep borehole into modal music stratum, free from self-indulgence, yet drenched in tenderness and, at the same time riding the razor’s edge of visceral energy. Through this fulsome set of ten songs – peppered with compositions of his own – it is fascinating to hear how Mr Weiskopf versatility and expression; marries emotion and dynamics. “Loose Lips”, a chart written in the style of bebop is a prime example of this with a huge dollop of wit thrown in for good measure.

In other numbers – “How Are Things in Glocca Morra?” – for instance Walt Weiskopf has adopted a more discursive style featuring idiosyncratic pitching and a tone that sometimes risks disappearing entirely. Here, as in “Young and Foolish” he seems to evince some sort of experience 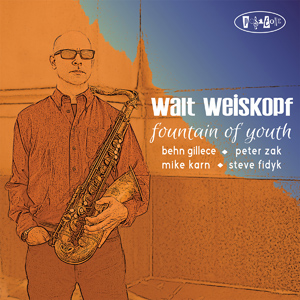 that is suggestive almost of transcendental meditation – so calm; almost still is his approach to colour, and tone texture. And he is brilliantly complemented as well, by the presence of Behn Gillece, one of the fastest-rising young stars on the vibraphone, to great effect.

It is on ballads such as those – where he employs a more Romantic tenor than the breathiness of raw fire – that Walt Weiskopf shines in his contemplative sense of questing. That said he can still cut it in the everyday hellfire of “Backstage Blues”, “Hot Dog Days” and on Behn Gillece’s wonderful “Double Date”. Fountain of Youth is an album that suggests it is early days yet in the cresting career of Mr Weiskopf. As such it is going to be an intriguing next few years for this musician who came with a broad, garrulous drawl but has quietly slipped into a saxophone realm that is graceful, hypnotic and pure poetry.